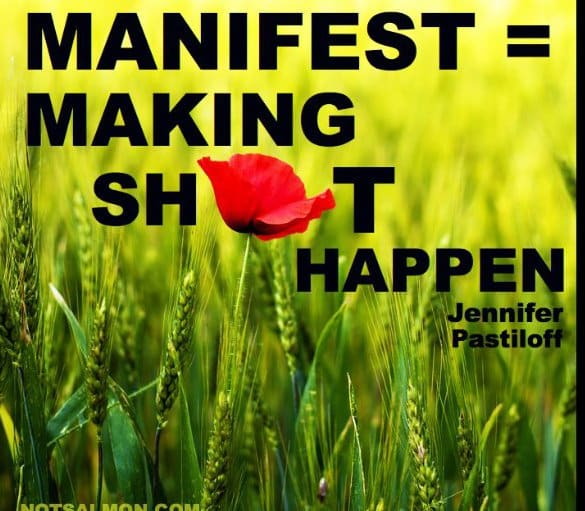 I received the following email yesterday and it made my heart burst so I asked C. if I could share it. C. took my workshop in Philly at Dhyana Yoga ( I will be back there Sep 2012.) Such honesty and courage.

Just want to send a thank you your way for being such an inspirational force.

I attended your manifestation workshop at Dhyana Yoga in Philly and was really moved by it. I have to say though, I was met with a lot of self-resistance before I could finally let myself start to “make shit happen” haha. After leaving your workshop I actually felt a little bit anxious, a little bit panicky that I was not in fact making anything happen that I wanted to be happening!!

I was (and still am) working at a job that I feel is “dulling” me, and could not put my finger on what it was I even wanted to be doing in life. It took a while, nearly two months, before the answer just suddenly came to me and seemed so simple and obvious. I have been doing yoga for the past year and committed myself to it in a big way. It has changed my life in every sense and makes me feel good to know I am still capable of being motivated and passionate about something (because my job was starting to make me feel like I had no fire left in me).

I decided about two weeks ago that I am going to to do the teacher training at Dhyana, and fully dive in to my yoga practice. When it finally dawned on me that I should do this, I had such a “duh” moment, like why on earth had I not realized this already?? Because it just wasn’t time for me to realize it yet.

I wasn’t ready to recieve it.

Now that I am, I feel so greatful that I attended your workshop, because it really lit a fire in me I think. All that anxiety and fear I felt after leaving was so neccessary for me to get to where I am now. I am still at a job I am not loving, but I am making moves to get myself into a much better place.

Thank you so much for sharing your positivity, realness, and courage. I hope to be half as inspirational as you are to others.

Confession: I Lead With My Head

Chronicles of a Neophyte Yogi.