It’s like a fisheye view where you can see everything at once: your whole future, unrelenting and nimble. As quick as an idea forgotten before its spoken.

You can see it all mapped out: irreversible veins raised and ready for puncture.

The geometry of your life: blue, ingrained, vainglorious.

It’s like how your eyes can adjust to things after an eyeful of sunlight, the inside of an apartment or a book. How you can see part of the moon when it isn’t really there anymore. That hanging sliver, white as pearl on black. It’s fullness still faintly visible: an illusion. The whisper of its former body. A palsied arc, the fingernail piece of moon that hangs like it’s missing something of itself, waiting out it’s own cycles.

I understand as I arch the small moon of my lower back, pressed into a groove of a kayak afloat in the Pacific Ocean just north of Santa Monica that: All things converge into this one point.

This point where past culminates with present and future and time stops thinking about what to do next.

Everything floats as time takes a breath and lets you live for the first time in your life without the words Something else must be done. My life isn’t enough the way it is.

Maybe my father is somewhere in Malibu, fishing and alive as ever. Maybe all I get with the people I love are minutes, or, at best, a week well spent, a Friday afternoon, a bottle of wine in a garden.

Can I ever truly understand that no one stays with you forever?

That yes, the reflection will be there again, your face will still be in the medicine cabinet mirror in the morning, but that so much will have come to pass and you won’t even know it as you scuff the floor in your tired socks and sit down to cereal.

You Came to Ride The Train. 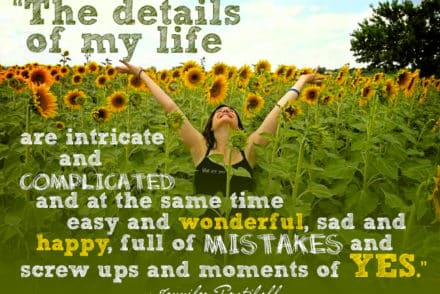 Details of A Life.

The Yes Within You.

Hello, My Name is Rebecca & I Lost My Mom to ALS.