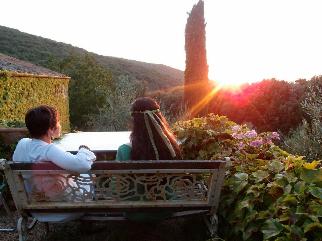 I am about to bleed over everything.

Late one night, after a series of miscommunications strand us, my friend and I ask a cab driver to drop us off at my boyfriend’s place. Leave, we said, we’ll sleep here. When I knock on my boyfriend’s window to see if I can wake him from being drunker than I am, the glass in the pane undoes itself and a blade of it is buried deep in my left leg. I begin pouring more than the sky can be envious of. I pull the piece from my thigh and bleed in latitudes. I howl for my friend to call an ambulance, for something safe to come humming through the night toward me. She tells me later how my heartbeat felt in her hands: hot and unstoppable. But right then she thought she’d lose me.

Once, I dated a man who broke me into tiny pieces of myself but first pretended to fix me. He would make benches and useful, holding things out of wood. He made me a shelved mirror, which I treasured, then painted over, then threw away. He once wanted to save me money and so knelt on the cement of his garage to change my worn-to-the-metal brake pads. Instead of fixing anything, he shouldered a dent into the silver of my car. I had to take a car to a professional for the brakes, but left the crater. Later and again and again he would show me how to be useful by doing things useful for him. He built me a box, not out of wood, but from his own insistence that I was just a tiny thing meant to ask for permission to be anything more. I don’t know much about fixing anything except that a wrench is nothing without force or oil. So much of me bent out of place.

Somehow, when that window etched itself inside me, my cyclic scream did not wake my boyfriend but I was loud enough to pull the neighbors from sleep. I do not remember this, but they tell me they placed me on the ground before I would have fallen there myself. There, I make a large black stain they will hide under their welcome mat. I fall in and out of falling. I am wet with blood and rain and the water they pour on me to wake me. I am carried into an ambulance and my earrings—tiny pieces of painted glass on wire—are taken from me. Kept safe.

When I was very small, I accidentally stepped on a baby bird who had fallen out of her nest. I was barefoot. I wasn’t looking where I was going because I was cradling my cousin’s shoulders. Carrying him with my sister, pretending to aid his pretend wounds (even children know tenderness comes after a fall). I felt the little life of feathers crush beneath me. Of course, stepping on the beak and bones hurt me, but I never tell anyone that is a pain I remember.