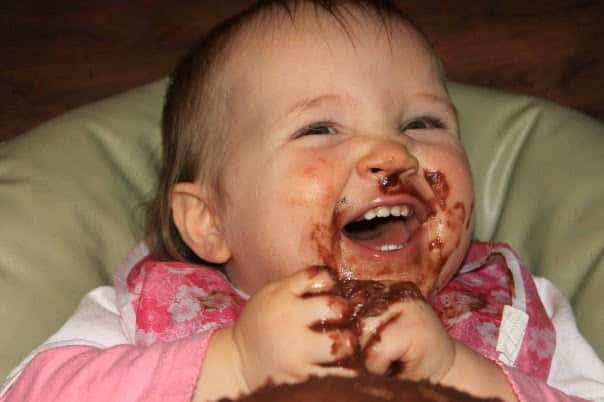 The four of us sit at the breakfast table in the sunroom. We’re still in our pajamas. The morning sun pours in, and I blink rapidly at the sunbursts in my eyes. It’s a hot and humid late August day, but inside we are cool.

Our three-year-old sits between Ed and me, too big for a booster seat anymore but too small still to reach the table from a regular chair, so he is on his knees, carefully unrolling one of the freshly baked but entirely canned orange cinnamon rolls his dad has prepared us for breakfast. He finishes unrolling it, and now that it’s a long boring strip, he decides that it’s no good and hands it back to his dad. I take it, roll it tightly again, and offer it back to him. “Is that better?” I say. “Yeah!” he says gleefully, grabbing it and finally taking a bite.

On my other side, our newly minted one-year-old daughter perches in her high chair, working her newly minted pincer grasp to pick up the tiny pieces of cinnamon roll I have torn up for her to eat. We were so much stricter with sugar two kids ago, but I’m as unreasonable as ever about choking hazards. She’s clearly frustrated with the small pieces, shoveling them by the handful and squawking at me for something more substantial. Or maybe she wants milk. It’s still tough to tell at this stage.

It’s these moments—these moments when life feels so very close to being absolutely perfect, almost maddeningly close—that I am stunned, again, by how absolutely imperfect, how irrevocably and horribly wrong it all is.

It’s in these most ordinary-extraordinary moments, these moments that seem to happen every day and yet almost never, when she is most absent. As we four sat, savoring our rare vacation treat of canned orange cinnamon rolls, she was so missing. So missing that I couldn’t help but imagine her there, even almost see her, on the other side of the table next to her dad, squinting at the sun in her eyes. Gangly and knobby-kneed now, with not the slightest hint of the chubby cheeks that graced her sweet face when last I saw her. Those exquisite knees pulled up tight and tucked under her nightgown. Hair maybe long enough at last for a braid but still so wispy that the braid can barely contain it. A five-year-old kid. “Five-and-a-half, Mom!” I can almost hear a small but indignant voice say. “Mommy” would surely have given way to “Mom” by now.

She’s right there, and like the sunbursts in my eyes, I can see her only until I try actually to look at her, and then she glides away.

It’s been four years, four months, and seventeen days since my daughter Hudson died from a sudden and incredibly aggressive bacterial meningitis infection. She was seventeen months old. One day, she was an otherwise healthy toddler with what appeared to be an ordinary toddler virus. The next day, she was fatally ill. Three days after that, she was gone.