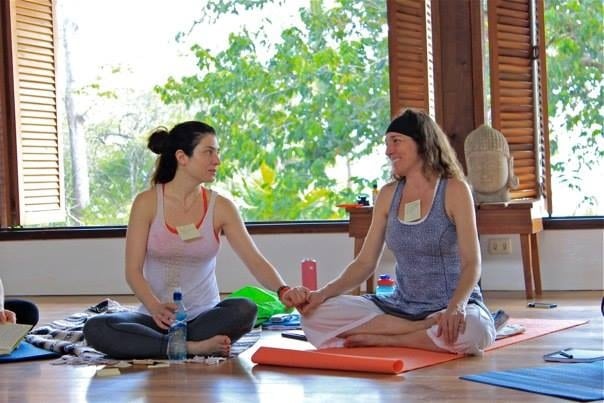 This morning, during my retreat here in Maui, we were talking about the ways in which we stop ourselves from having what we want. Our excuses, if you will. One of the girls here, an incredibly beautiful and inspiring woman named Melissa from South Dakota, shared with us a whole bunch of her excuses. (We all have so many, don’t we?) One of them was that she didn’t want to take up other people’s time and another was that what she said didn’t matter.

She had written something apparently that she wanted to share but (insert excuse here.)  I asked her to read it aloud, telling her we had all the time in the world. (We did. We do!) There were a few other excuses of hers that I won’t bother to share because, quite frankly, they don’t matter. What matters is that she got the courage and read this letter she had sent her friend who’d been having a hard time and didn’t think she could make it through. She read this piece aloud and I will spare you the emotion that took place in the room but what I won’t spare you is the piece. I asked her to send it. She is a gifted writer. To hear her read this out loud was a moment I will never forget and I wanted to share because I think it is by far, one of the most stunning things I have ever witnessed. I want you to read this raw and brave and awe-inspiring piece. Please connect with her or leave comments at bottom. I bow to you, Melissa Shattuck from South Dakota.

I lived in hell for five days once.

At least it felt that way.

It started when they told me my baby was dead at a routine appointment. And it began to end when they finally removed her from me.

Why they thought it would be more beneficial to see if my body would naturally deliver has remained a mystery to me. I’m sure there is some logical reason. But, it was as though it was not odd to ask me to carry a dead body within me.

The first night I slept well from the exhaustion of it all. But I don’t think I slept after that. The nightmares that they had made a mistake and were going to steal my healthy, live baby from me were more than my mind could handle. And so I would lay there for hours at a time deciding who was to blame. Lack of sleep makes me crazy. Lack of sleep for days on end makes me into a monster.

God. God is to blame. Nothing happens without God’s permission or ok. I hate God for causing me all this pain.

And on and on it goes. The patterns play in my mind for all these days. And noone it seems can understand. The people are all to blame. They keep saying well-meaning but seemingly stupid things like, “There was probably something wrong with the baby, so it is for the best this way.” “You will be able to try again.” “We can never know God’s plan.” “At least you have Alex. Think of all the peopel that are never able to have any children.” “The baby’s soul has already served it’s purpose.” “When you have another baby someday, this will be the soul that will come back.” The people drive me crazy. So now I hate me, my husband, the dogs, God, and all the people.

And all this time I have a dead body in me. A baby I had felt move once. We don’t tell Alex, who is 6, that any of this is going on yet. If I can’t bear the idea that I have a dead child within me, how could he handle knowing this? And so, in all his sweetness, he comes up to me several times and hugs me so he can hug the new baby that is one the way.

I can’t stay in the house the entire five days. It’s become my prison. And so I escape and am not prepared for people to touch my belly and tell me how adorable it is. I want to scream at them, “The baby is dead!” Instead I say “thank you.” I go back to my prison and want to die. Five days is an eternity.

My body does not naturally got into labor. So they will have to take her from me.

A funeral home offered to cremate the body for free. We have to buy the urn. We do this hoping it will bring us some comfort in light of the fact we will never hold her. After the procedure I get a call that the tiny urn we bought is not big enough for all the remains and would we like to purchase something else. It seems incomprehensible to allow any part of my baby to go anywhere but with me, so I say yes. I will buy the small silver cross I saw that sits in the pretty glass case as well. Looking back that call seems very strange to me. But then it was all so surreal. The same with the small ceremony we held at a church. Our attempt at closure.

My body reflected the state of my mind. I couldn’t let go and looked pregnant still over a year later. People asked me all the time if I was expecting. “No,” I would laugh. “I just haven’t been doing my sit-ups lately.” And then I would go back home and cry. I believe I will never recover from this. Never say never.

One day it seemed as I kept moving through my days, my blaming began to let up. It had to. It felt poisonous to hate. And so, instead I just felt empty. Which for me was a step up from the pain. And it was in the emptiness I think that I opened to healing.

Looking back, I wonder if that’s forgiveness for me. And my body reacted in kind and began to let go too. I didn’t look as pregnant anymore. What or who did I forgive? All of it I guess. And I have no words for how it happened.

I don’t know if that makes sense. I don’t recall trying to forgive anyone or anything specifically. That didn’t work for me because I thought I was failing when I was still angry. I just remember opening in the quiet emptiness to another way….

Some people seem to think they know where she is now or what the purpose of it all was. I don’t have a clue. And I don’t need to anymore. There are things that are much bigger than me and my limited mind at work. And so to me, my precious angel, Gabrielle, will be 10 this year. Somewhere out there.

Or maybe just in my thoughts and in my heart.

Connect with Melissa by leaving a comment below. Melissa is the editor of The Manifest-Station.