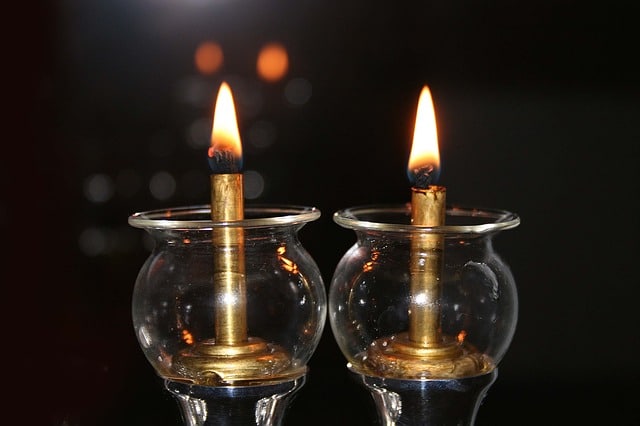 In our sodden delta parish, December means sweater weather, fleece parkas, fairy lights twinkling along the bayou. At night Carl and I sip monk beer on our back patio while a cat curls up at our feet. We sit beside azalea bushes, in the shadow of oleanders, and watch the pale moon glow. Autumn leaves don’t change colors here. They dry out, become brittle and papery, then fade from green to brown by Hanukkah.

This year I’m observing my second Hanukkah in Louisiana, and I’ve done the thing I never expected to do. I said yes when Carl asked me to marry him. At this time in our lives, he’s a Baptist minister, and he serves a small congregation known as the “gay church” in town. He’s the only minister between Jackson, Mississippi and Shreveport who will officiate at same sex weddings. Recently, I fretted when he stood in a gazebo across from the court house and blessed the union of two women while cars whizzed along a busy road –– this is 2006, nine years before Obergefell v. Hodges. Our parish carried David Duke during his bid for U.S. Senate. And a few years before I moved to town, someone left a burning tire on the front yard of one of Carl’s colleagues, who’d spoken out against Christian prayers being broadcast on the intercom system of a local high school. I tell few people I’m Jewish, and we keep our address unlisted. Yet Jews view me with suspicion too. END_OF_DOCUMENT_TOKEN_TO_BE_REPLACED