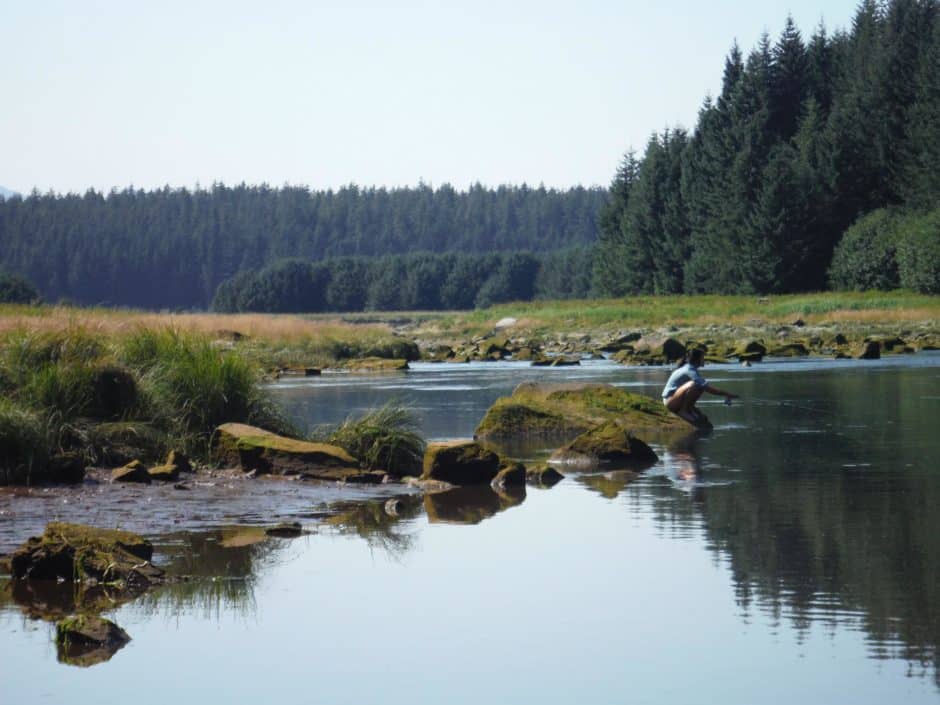 “I hope we catch a female,” my friend Selena says as we hike along the grassy banks of the Bartlett River. “Mmm, think of all that fresh roe…”

“Actually, I don’t want to think about eating slimy fish eggs,” I say to her, “even if they are straight from the source.”

She ignores me and carries on. “I’m going to cut it open and eat it right on the spot, sashimi style! I want to feel its heart beating as I chew,” she says, shouldering the fishing rod she finagled out of the teenage boy who works at the lodge.

I wrinkle my nose and shake my head. “You’re disgusting,” I say.

Everywhere we’ve ever traveled together, Selena always manages to gross me out with her food choices— whether it’s by scraping bivalves off a craggy cliff in Brittany for a quick snack, or sucking the brains out of a lobster at a roadside shack in Maine. “It’s the best part,” she said between slurps, butter running down her chin, while I watched on in horror.

It’s our last day in southeast Alaska before heading to our respective homes—Austin for Selena, and Miami for me—and we’ve spent the last two weeks hiking, kayaking, and camping all over the region. During our travels, we have learned that Alaskans live for salmon, spending much of their summer stocking their freezer so that they’ll have plenty of fatty fish for the long winter ahead. Although it’s mostly chum or pinks this late in the season, Selena is hoping for a sock-eye—a female, of course.

As we maneuver our way through the tall grass, I trail behind Selena, singing all the songs about fishing that I can think of. She doesn’t join in. She’s very focused on the task at hand: finding the best spot on the river for catching salmon. Every now and then, she stops at the river’s edge and scouts the landscape, hands on her hip, head cocked to the side like she’s listening to something I can’t hear. Mind you, she only learned to cast a fishing line a day ago, so I can’t imagine what intuition she’s working with. END_OF_DOCUMENT_TOKEN_TO_BE_REPLACED