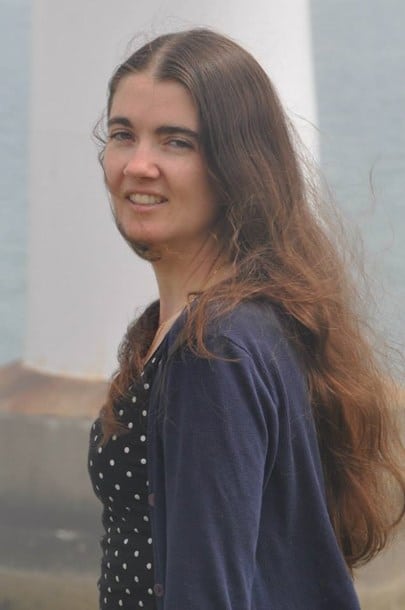 The love of my life so far was not the man I spent nearly a decade of my life with, from my early twenties through my early thirties–the one who went with me to my mother’s memorial service and then only a few months later stood beside me by my grandmother’s deathbed and then held my hand at her funeral. It wasn’t the man who accompanied me to surgery and then fainted while watching a nurse prick me with a needle for a blood sample, sending an army of medical staff into the room who collectively shoved me off my gurney so they could place my unconscious boyfriend there and feed him oxygen.

No, the love of my life was not the man who told me in the sunset year of our relationship that he would never marry me and from whom I finally moved on.

The love of my life was instead the man who picked me up from my grandfather’s funeral five months later one balmy August afternoon in eastern Long Island.

It was my grandparents who really raised me, so essentially my grandfather was my last true parent. He was also the only one who partook in my rearing who never called me a curse word or raised a hand to me, the one who made sure I never starved.

After the rest of the funeral procession left, I sat alone on a stone bench in a lacy black dress with a sweetheart neckline that was slightly too sultry for a funeral, but that I couldn’t resist wearing to impress the man I had spent so many years pining after. I knew my grandfather wouldn’t have minded. He had always been very fond of Brian, referring to him as my “very nice gentleman friend.”

I hadn’t spoken to Brian in about eight years. It was my ex who unwittingly brought Brian back to me, by finding and returning an old journal of mine that had been slated for the recycling bin after I moved out of the apartment we shared for several years. Scribbled in the back of that journal was Brian’s old address, his parent’s address. I sent a postcard in the mail and three days later he called me.

We started speaking on the phone again every night, as though no time had passed. Brian begged me to visit him, but I didn’t think I could find the time, nor was I sure it was a smart idea. Yet very soon after, as if my grandfather had willed our reunion himself, he died and was buried in the veteran’s cemetery the next town over from where Brian lived.

Brian and I met my senior year at college shortly after he transferred in as a junior. In him, I instantly recognized something kindred. We were both foreigners even in our native towns, individuals marked by melancholy, our souls too soft to take society’s callousness for any extended period. Yet every time I dropped heavy hints about my feelings, Brian evaded me or changed the subject, making it clear he didn’t share them.

Instead, I forced myself to focus on men who actually returned my romantic affections, eventually losing my virginity to someone else that year. But even then, Brian was the one I would always write bad poetry about when I returned to my dorm room.

Brian and I actually didn’t become very close until I had already finished school.

The summer after I graduated from university I was caught up in some sort of surreal post-partum. Having given birth to a Bachelor’s degree and not knowing what I should do next, I instead sulked around the small college town singing my post-BA blues to anyone who would listen. But Brian’s ear was the one I sought out the most, in his little shack on campus where he signed out tennis rackets to posh post-grads for his summer job. I would visit him almost every day, sitting for hours on a metal folding chair and sweating inside that little shack as it baked under the searing July sun. During that time we also traded books and CDs, and talked about our fears and frustrations, about what we wanted for our futures.

When fall arrived, I decided to postpone my plans to move to Massachusetts until after the New Year. Brian and I spent many mornings and evenings at the diner those months, devouring pancakes and milkshakes, with him always picking up the tab with his father’s credit card. At night, we would joyride into the mountains and back into the village and then sit parked in his car, sharing stories with our faces backlit by streetlamps and an icy sliver of moon.

It was Brian who helped me move my meager belongings from New Paltz to Amherst. After he finished bringing my heavier stuff into my new apartment we sat side by side in his Jeep where he sighed sadly.

“I can’t believe you’re really leaving me,” he said.

But he did not ask me to stay.

I was worried the distance would cause our friendship to fade, but we became even closer after my move, our daily talks on the phone as much a given as the sun rising. He called them his creature comfort and later on, when his depression became so bad he needed to move back home and go on heady mix of medication, he said it was one of the few things that kept him sane.

The first time he told me he loved me (as a friend, of course), we had already known each other for over two years. He sang Sea of Love over the phone to comfort me while I wept bitterly over a rejection from a PhD program.

My sobs softened to nothing. For several seconds after he finished the singing, all that could be heard over the line was the both of us breathing.

“I love you, Laurie,” he finally said.

There were only a few people in my life who had ever called me Laurie. My grandparents, a couple of close friends from high school, my ex and Brian.

When Brian pulled up to the cemetery gates the day of my grandfather’s funeral, I barely recognized him. He was over a hundred pounds heavier and had a grizzled beard. As I settled into shotgun, I felt my heart sink in my chest in disappointment. Maybe the spark inside me for him had died after all.

We drove along in relative silence until we passed a fruit stand and he asked if I wanted an apple, to which I snorted a derisive no.

“No fruit for Laurie,” he said with a wink. And then, referring to my once infamously insatiable sweet tooth: “We need some pancakes…with some fudge on them.”

I laughed for the first time since my grandfather died and immediately fell in love with him all over again.

A few nights before the funeral, Brian had called me while drunk and declared that one of his biggest regrets was that we had never dated in college, that not a week went by where he did not ponder my whereabouts and the path his life might have taken had we wound up together.

We started dating–if dating is what you can call near-nightly episodes of hushed phone sex followed by frenzied declarations of love. Considering the millions of minutes of our lives spent on the phone with each other, I suppose it’s fitting that this was how we consummated our romantic relationship. By the time he visited Boston and we finally kissed for the first time, Brian knew my desires more intimately than any other lover ever had.

In her poem Admonitions to a Special Person, Anne Sexton wrote “To love another is something like prayer and can’t be planned, you just fall into its arms because your belief undoes your disbelief.”

And so it was with us: I submitted more fully to the force of our love than I ever had to anything. END_OF_DOCUMENT_TOKEN_TO_BE_REPLACED