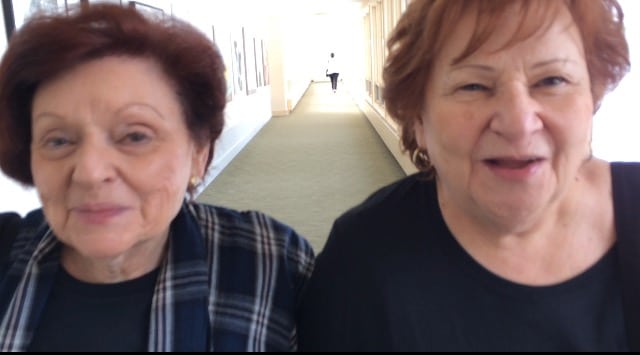 Hi guys, Jen Pastiloff here. I don’t post my own stuff too often these days, but these videos, holy Wow, mother of all cups of coffee. Please do yourself a favor and take a few moments and watch these videos. Please. One of these women is a Holocaust survivor. Their friendship is so utterly inspiring to me that it brought me to my knees. I want to have that kind of love. It’s an honor to the guest speaker again here at Canyon Ranch. What a great honor and privilege. Thanks for watching and sharing these videos. May we all listen more. May we all pay attention to the stories inside of us and inside of others, because, do not be fooled, we ALL have one to tell. Listen. This is beauty hunting.

END_OF_DOCUMENT_TOKEN_TO_BE_REPLACED

And So It Is, Beating Fear with a Stick

There’s this parallel life running alongside yours.

They usually don’t intersect except every once in a great while. When your eyes won’t close late at night like someone is holding the lids open for you to look at something, but you’re not sure what so you just keep looking and looking until you see that parallel life and go Oh My God, there I am, that’s me if I had gone there instead of here or said this instead of that and then the longer your eyes stay unblinking they see farther back into the space before you were born. In that space, which is dark and wet and grey, your eyes notice things like your parents falling in love and laughing in a car and you’re not even in the picture. You’re not even an idea yet. You’re not even a kiss.

You’re simply a pair of dry eyes who won’t close in the middle of the night. It’s like someone is holding your eyes open and saying Do you see? And you say Yes even though you have no idea what you are supposed to be looking for and all you want to do is close your eyes and fall asleep.

You stare at the ceiling and pretty soon the cottage cheesiness of it starts to move in on you until it’s pressing down on your chest and finally you fall asleep because there is so much weight on you that it makes you tired. As if you climbed up a hill with someone on your back. Maybe you did in a parallel life but for now you just want to sleep and you want them off your back and the ceiling off your chest.

Parallel lives to mine:

Then there’s the life I have now. Or the life that has me. Number 9: The life I am aware of.

Sometimes, I see around the hairy edges into the other ones. The lines that separate them aren’t as solid as you would expect, but rather a wispy strand here and there, a stroke of luck demarcating this life from that one.

This morning, as I left a weeklong stint at Canyon Ranch in Lenox, Massachusetts, I sat in the back of a fancy minivan. The driver, an avuncular fellow named Bruce, was giving my mother and I a ride to the Albany train station and was determined to show us all his beloved spots on the way. The town of Lenox, Olivia’s Lookout, Tanglewood. I had to keep asking my mom What? What did he say? Like a crazy old aunt in the back seat because I couldn’t see his mouth to read his lips. Turns out Bruce was raised by deaf parents. Parallel lives. He showed us pictures of his family. His wife at age 17. His granddaughter.

His wife had been beautiful in her turned-away from the camera way 17 year olds in the 1960’s posed for their high school graduation pictures. He told us that she was going to be a nun until he came along. Her father had kissed him on the mouth in relief. Parallel lives.

He still wants to kiss me but I don’t let him, Bruce joked.

Bruce drives people back and forth from Canyon Ranch to the airport or train station every day. When I asked him if he’d ever felt sad that he wasn’t able to communicate better with his parents because they had been deaf he told me that he was living the dream! Sad? I’m living the dream! My wife says to me everyday “Don’t let them steal your happy.”

In Bruce’s parallel life his wife became a nun and they never met and his parents could hear, clear as a bell. Is it a better life? It’s impossible to say.

The only life is the one we are aware of so better cannot apply. It might be out there, somewhere, on the side of the road or in the middle of the night inside a racing heart but the only life worth knowing is the one here and now. In this minivan, on this train, in this body.

I couldn’t write the whole week at Canyon Ranch. I taught my workshops and rested and ate and read but I didn’t have the usual pull to sit and write. That’s how I write. By inspiration. For better or worse. I wish I could say it was by discipline but it’s born of a conversation or a look or the way the fire crackles and pops and makes you jump because the quiet is a penetrating fog and you forget that something called sound even exists. You think the world is only fire.

My writing is born of that. Of the things people do and say and the way it feels and how the ceiling closes in on me and I can’t see anything but mistakes as sharp as rods.

So nothing came to me all week. Not because I wasn’t inspired but because I was waiting for that intersection of a parallel life to cross and hoping I would be awake enough to catch it at just the right moment so as to recognize it for what it was: a gift.

The timing has to be just so, so that when Bruce says Don’t let them steal my happy, I am facing him, I can see his lips, I can hear his words without the usual pillow-over-face-sound and I can nod and agree over our luggage, What else is life about?

Do not let them steal your happy. If only I could print that out on t-shirts and hand them out on the streets. Here, take this. Here, wear this.

He told me once when he was a small child he had said something nasty to his deaf father while Bruce had his back turned. He said his father had smacked him and sent him to his room. Years later he asked his father how he knew what he was saying since his back had been turned and his dad said that he didn’t, that he had just seen Bruce’s ears moving. When he spoke, his father had told him, his ears moved. He also said that he could never scare his father like they’d wanted to as boys, because the air moved as they approached him.

So the air moves. The subtle way the air moves and catches a parallel life and here you are sitting with a man who understands hearing loss and happiness and What-if’s in the way most people don’t. You spend your whole life looking back and forward and staying awake trying to get a ceiling off your chest and here’s the answer in the form of a driver.

Those other lives? The What-ifs? Don’t let them steal your happy. They are not possible.

It’s the way we keep ourselves stuck, this letting something hijack our eyes and make us watch what we think was another option of our life. There is no other option. Sure, starting now you can choose to go back to school or get a divorce but you can never ever not have dropped out of college or not gotten married in 1969 to someone you wished you hadn’t.