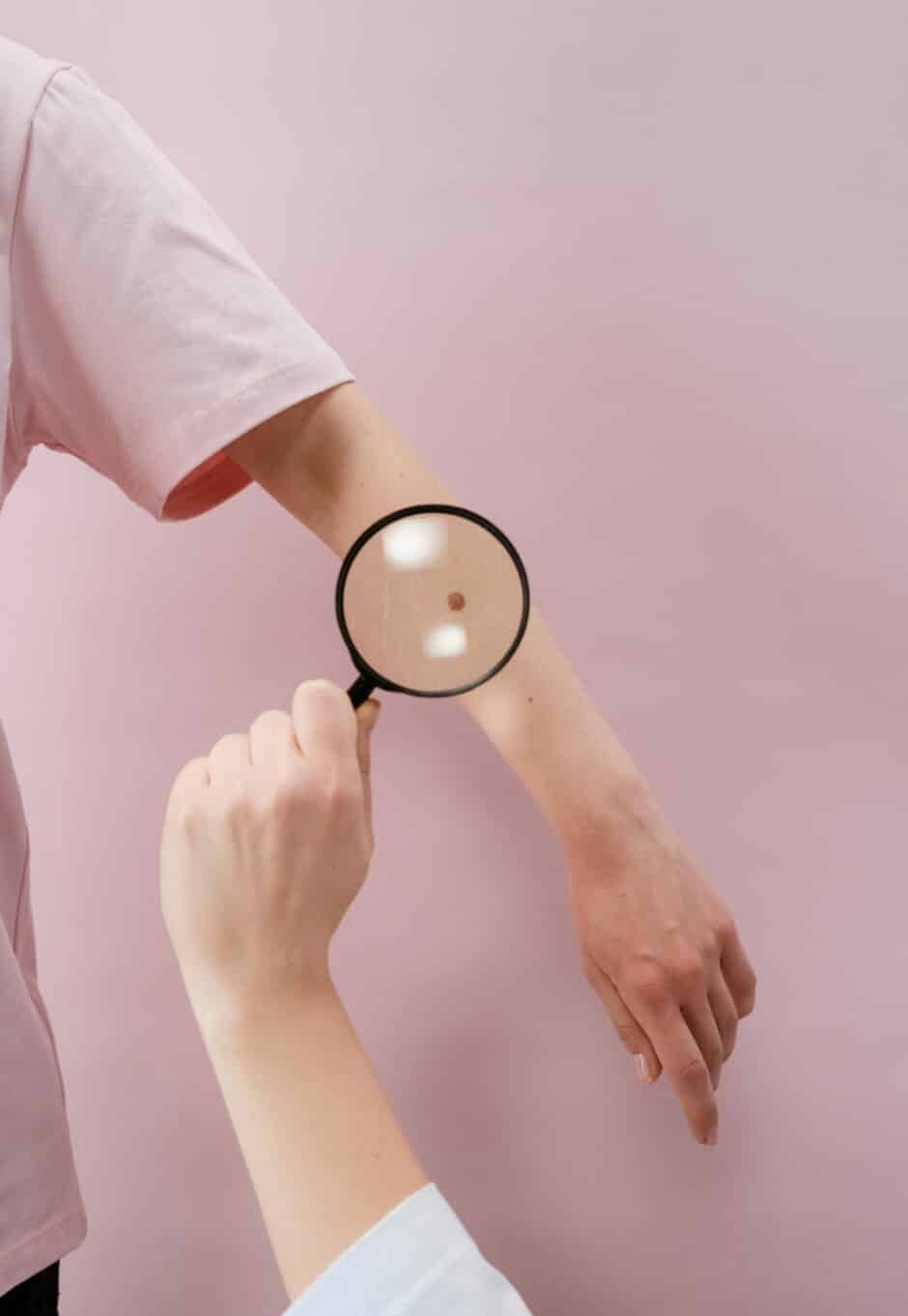 I got skin cancer for the first time when I was 28. Basal cell carcinoma, right temple, one freeze and burn surgery required. I’ll wear lots of sunscreen, and this won’t happen again. This is my health scare, and now it’s done, I reassured myself. But a year later, at twenty-nine, my white scar that I was painfully self-conscious of became suspiciously pink around the edges. My insides churned in that way that only happens when you know something bigger than you is brewing beneath the surface.

By then, I was four-and-a-half years into my marriage, and it’d been touch and go the entire time. After the diagnosis, I brought my then-husband to a consultation, so a doctor could explain that “basal” is not to be confused with “benign.” This was in fact, cancer, and therefore, it needed to be removed for medical reasons. After confirmation from a medical professional, my then-husband felt reassured that I was not just being dramatic about the whole skin cancer bit. By the time my surgery came in December, we’d separated, but I knew we were most likely headed for a divorce.

Prior to my surgery, I noticed another spot on my center forehead, near the hairline. I call this a, “For Fuck’s Sake” moment. As humans, we’re  all guaranteed 2-3 “For Fuck’s Sake” moments in our lifetime. These are the moments that bring us to our knees. They sometimes make us more resilient in the long run, but, let me abundantly clear, the interim period is extremely unpleasant, and if not handled properly, can really get the better of you.

Two weeks later, that biopsy from my For Fuck’s Sake moment came back positive as well. My one surgery in December would now be a “two for one” surgery. I spent hours bracing for impact before the operation. I scoured the internet for pictures of MOHs surgeries, telling myself it would make it easier post surgery to deal with my own recovery.

On December 15, 2016, I had an eight-hour surgery to remove both basal cells which left me with two facial scars. There were twenty-seven external stitches total, and I simply didn’t recognize myself every time I accidentally caught a glimpse of myself in the mirror. The pale, terrified, stitched-together girl that gazed warily back at me seemed like an imposter. How could this be my life? How did this happen? It was the first time I’ve ever truly felt unlovable, and that feeling lingered for longer than I care to admit.

But I didn’t feel like a badass; I felt broken. But I couldn’t make a clever joke; I was mortified by my own appearance. As women, we’re told by society both directly and indirectly to be hairless, poreless, blemishless. Most days, I was haunted by an inner voice that hissed, “Who would ever want you now?”

Fortunately, as the months crept by, my scars went from bright red, to medium red, to an aggravated pink, and finally a subdued white.

And then, five months after my surgery, my husband did the smartest thing he could have possibly done.

He called me dumb.

He called me dumb one last time.

The specifics of that conversation don’t really matter. My hungover husband who had driven home blitzed the night before, who was so hung over we missed therapy with the Christian marriagie counselor he insisted on seeing, called me dumb because I refused to agree that the Hulu show we were watching at the time was “liberal propaganda.”

Because those lovely specifics converged at just the right moment and created a crescendo, a tidal wave of clarity if you will. And when that wave broke, it allowed me to have another “For Fuck’s Sake” moment when I needed it most.

Dear reader, my hungover, drove-home-drunk husband called me dumb, and suddenly everything within me realigned. All the nuts and bolts came together with a resounding internal click.

This was not, is not, could no longer be my life.

The beauty of a For Fuck’s Sake  moment is that it brings about clarity whiplash. Meaning, the truth comes at you so fast, you’re forced to examine it head-on. And since I’d just dealt with a FFS moments months earlier with my two-for-one basal cell diagnosis, I had a better inkling of how to handle a FFS this time around. That skin cancer FFS had been overwhelming, but this FFS ended up being the compelling kind.

The best way to handle an FFS moment is by taking action while doing everything possible to maintain your sense of humor. I had just handled double skin cancer surgery. Surely, I could handle divorce.

And so, I did it. I finally walked away from a dysfunctional nine-year relationship that frankly, never should have made it past a year. I found a mediator. I filed for divorce. And since I was a teacher at the time, my summer job became “Getting Divorced.”

It turns out, that if you have the luxury of making “Getting Divorced” your sole job, you can actually expedite the whole thing rather quickly. I made a “Getting Divorced” playlist. I did more cardio than most doctors would recommend in a fiscal quarter. I went through a brief, albeit dedicated, house music phase. Please be advised, A For Fuck’s Sake moment requires outside-the-box coping strategies. Green smoothies and an FFS don’t pair well.

Nine weeks after uttering the words, “I want a divorce,” I walked out of the courthouse with my marriage dissolved. Sometimes we have to leave.

And yet, I was still able to rebuild my life. I was able to regain financial security and independence. I was able to make a career change. I was able to date and form healthyish, (just being honest, some things really take time) romantic relationships again. And so it turns out, there are things more important, more sacred than marriage. Self-worth being one of them.

27 stitches broke my soul, but they forced me to become whole.

Most days, I still wish skin cancer wasn’t part of my vocabulary, but in a strange way it saved me from myself. Because for fuck’s sake, it gave me my moment.

Please Note: In a bizarre twist of fate, I heard from my ex-husband a couple years after I walked out of that courthouse. He got skin cancer. Life is simultaneously strange and simple.

Lauren Gobell is a former middle school English teacher and now works for a digital media company. She is probably running, reading a thriller, or reapplying sunscreen.

My mother discovered she was ill a few months after I was born. The way the story was told to me many years later, my mother had sat down in her favorite lounge chair in our living room and by the time she got up, the entire chair was covered in blood and poop. She’d been too ill to look after me, too sick to breastfeed me, too weak to hold me in her arms. A few months after my birth, while my mother was in and out of the hospital and my father was working full time to provide for our family, it was my Nana who mostly took care of me.

My older brother and sister were teenagers by the time my mother died. I was the toddler who’d been left behind. A toddler with the same dark hair and the same light blue eyes as the daughter Nana had lost. Because Nana had been my surrogate mum so soon after I’d been born, when Nana lost her husband and her only child, I was all Nana had left in the world. Nana lived to be with me and I lived to be with Nana.

There was a short gravel road that led from our backyard to Nana’s back garden, so short it only took a minute to walk from our house to Nana’s. I spent time with Nana almost every day of the week but each time I went to see her I was so overcome with excitement I did not walk but ran as fast as I could. Even if I stumbled and fell and my knees were covered in little gravel stones I just got right back up and I didn’t cry because I knew that in just a few seconds I’d be back with Nana. END_OF_DOCUMENT_TOKEN_TO_BE_REPLACED