London itself perpetually attracts, stimulates, gives me a play & a story & a poem, without any trouble, save that of moving my legs through the streets. ~Virginia Woolf.

Hello from London. I’m at a bookstore in Putney that I like to come to when I am in town (Waterstones.) They are already wiping down tables and stacking chairs but it’s quiet. All the moms (mums) with their babies have left and only the hardcore bookstore people remain (read: a woman reading a tabloid, a young girl staring off into space, an older man doing crosswords and man with a shiny face listening to his cell phone and nodding as if he’s getting directions.)

Take the guy on the train, for instance. He must’ve felt some peace with that Rubik’s cube in his hand, some comfort must have been derived from all that furious twisting. He didn’t even look down at the cube- didn’t have to. He recognized the colors, as if by touch it seemed and it must’ve put to bed some anxiety he had. Whereas just watching him gave me anxiety. I hated those things in the 80’s. Still do.

Or maybe it was just a habit he had. Maybe he liked to twirl the Rubik’s cube on trains- maybe that was just his thing? That’s the beauty of it really, what I am getting out with today’s beauty seeking. How we all have our thing.

How just looking at the Rubik’s cube from across the aisle of a train sends me back to 1983 (a particularly shitty year) and reminds me how bad I am at some things (puzzles, Rubik’s cubes, board games, math) and yet it appeared this guy was in no way anxious. In fact, it seemed that the multi-colored cube relaxed him. How beautiful is that? This guy, sharing a pancake from a plastic package labeled PANCAKES with the girl next to him was utterly un-phased by something that, for me, would have given me hives.

The guy with the pointy little moustache and the plastic cube wouldn’t even be a thing to behold- it would be that ordinary.

I guess the beauty is in how weird we all are in our own spectacular pancake eating Rubik’s Cube way.

I was saying something as we were walking in Chelsea which ended with the word “love.” I can’t remember what I was saying exactly, and I guess it doesn’t matter, because the word love appeared right then over a doorway. A pink doorway with the word LOVE written in white above it. I thought about the person who lived there taking taxis and what they would tell the driver.

Or having a party and telling people, “When you find Love, you know you’ve arrived.”

Love lives here. And there love was. There was love. What you speak is seeking you. All these things popped in my head but mostly I thought, “cool fucking door,” so I snapped a photo and instagrammed it. It did very very well. It got many, many likes. Which gives me insight into what people are looking for-not that I didn’t know really. I guess it never ends, does it? The search for love. The amazement at having found it. The knowledge that oftentimes it’s right over our head.

I wondered what kind of personality lived there because I really couldn’t imagine coming home to my husband splattered in pink paint and saying, “Pasti, look what I did. I painted the door pink and wrote LOVE at the top.” (Although while I was away for two weeks in the fall lecturing at Canyon Ranch and leading a retreat, he did in fact paint the kitchen a kind of burnt orange.)

Without people you’re nothing. There’s a truth in that.

Portobello Road, Notting Hill (would you believe I have never seen that movie?)

I stopped and snapped a picture of a painting etched onto the side of a building of a man playing guitar and singing.

The background was yellow and he stood in a sort of relief away from the yellow and red circle with the star inside of it. The quote said, “without people you’re nothing” and then his name and the dates he lived and died. I assumed it was his quote, the guy painted  in black who white wore a patch that said Ignore Alien Orders. Joe Strummer, lead singer of The Clash.

I Googled it later and found out that it was indeed his quote.  There’s a truth in the fact that we need people. I mean, Hey, I love to be alone. More than being with people quite often, which is a mixture of being an introvert (despite leading retreats and workshops, the core of who I am is an introvert,) not being able to hear well, and lastly, the writer in me. (Can’t write when you are in a crowd of people talking.)

But so much of what I teach and what I believe is based on this quote, so thanks Mr. Joe Strummer. Thanks, Joe. Can I call you Joe?

I suppose you could live on an island alone and be fine, for a while. Or if you like to read, you could be the only one on the planet in a sea of books. But after awhile you’d want to die from loneliness. Truth.

Speaking of living on an island alone, did you see the latest celebrity mean tweets? Celebrities read mean tweets people have written about themselves. It’s hysterical. Tom Hanks read one that says “”Whatever. Tom Hanks is a whiner. Oh boo hoo, so you have a tropical island all to yourself. Fuck you. You. I have a turtle sandbox, bitch.”

That painting and the quote struck me as beautiful. It was kind of a stark day and then all of a sudden this burst of yellow appeared with a true sentence. I had just been trying to write and thinking of Hemingway’s quote “write one true sentence.”

I couldn’t even think of one. And there it was. Right there. So I wrote it down.

If somebody ever mean tweets about me (which I am sure they have and they will. I am at @jenpastiloff if you want to!), do you think Jimmy Kimmel will have me on the show to read it?

I was talking to my friend who’s recently moved out of her huge house. The house she’d lived in was one of my favorite houses. I spent a lot of time there sitting at her big kitchen table looking out into the yard. I asked her at dinner if she missed her old house and she said she didn’t. I dipped my chip (French fry for my America brethren) in mayo and told her I envied her a bit for that because I couldn’t even let go of the house I lived in while I was in high school.

How do some people break attachments? How do you let go? (How how why why how how?)

I it was all a bit too many hows and whys for dinner in a pub so we ordered gin and tonics (and that was a beautiful things because I thought I hated gin) and we talked about Dallas Buyer’s Club. I still can’t get over that movie. She hasn’t seen it yet so I went on and on and oh, as it turns out I don’t dislike gin. Maybe I did at one point? But I don’t anymore. I won’t say I love it but I enjoyed my drink and our dinner. Maybe people change.

I haven’t seen her new flat, but the description of it, especially the way she described the light coming in and how the Thames looked from her balcony, was enough to sustain me. I am a sucker for the way light falls on desktops or slants across the room. Give me light or give me death, I will proclaim when buying a flat or a home.

Watching someone gracefully move from one space in their life the to the next without the kicking and screaming that so often accompanies change is a beautiful thing. Easing into the phases of our lives as opposed to clinging to what we had, well, I’ll drink to that. Cheers.

I see lone shoes a lot.

Sometimes I wonder if I am the only one seeing them because, come on, how often are people dropping their shoes? Don’t they notice? Does it fall off their foot? Out of a suitcase? Maybe it’s a sign meant only for me, but I can’t even begin to imagine what it would be a sign for.

I see lone shoes a lot and mostly they are baby shoes. I don’t know anybody else that sees as many single shoes on sidewalks or in the middle of the road. Today’s lone show in the gutter in London was not a baby shoe. It was an ugly white tennis shoe that frankly, I would’ve also abandoned (although I would’ve dumped the right as well and not just the left shoe.)

In Battersea, outside the French café where my husband and I had walked in the rain to get coffee, the storyteller in me came alive. Whose shoe is that? What happened to him/her? Maybe I could write a whole short story around the white shoe in a puddle? Would I make the shoe the main character? Or maybe like the common thread in a book of short stories, the one thing that connected all the stories, or all of life?

I came home and tried to write one true sentence about the shoe.

I came up with a few.

There was only one shoe. A single solitary shoe for a left foot.

The mouth of the shoe was stretched out as if maybe the person who wore it had wide feet.

The shoe was ugly.

Wait, what if that’s not true, that it’s ugly? That’s not the truest truth of the shoe. What if the others things weren’t true, as well? What if everything could be looked at in this way, as if we studied a thing for clues about what it meant about our lives? About truth?

What if every shoe had a story?

What if we were all storytellers?

Part of me wanted to pick it up because it made me feel lonely seeing it there by itself.

I came home and thought shoes don’t have feelings. But then I thought if they did have feelings, they would tell us to stop moving, that they were tired, and felt like they had no say in the matter. They would say they were hurting.

Point is, if you look the right way, everything has beauty. Even a wet shoe without its mate lying in the street. 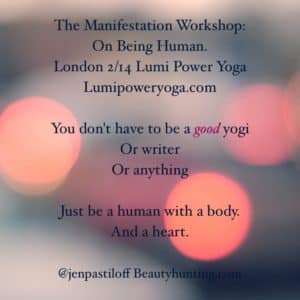