As an actress, my day-to-day job is auditioning. For each one, I spend time and energy preparing for it, dressing for it, thinking about it, driving to it, waiting for it. And then I go in and perform, give it my all, be as present as I can be, spend time (hopefully) collaborating with the casting director or director or producer(s), feel pretty good (hopefully) about what I did and then leave. Often to never hear another word about it. Imagine a life of job interviews where you have to bare your soul in all manner of vulnerabilities and almost never get the job.

After almost two decades of this you’d think I’d have it down.

I have learned something though that I continue to keep learning: If I felt good about what I did in the room and felt good that I got to express myself that particular day doing my version of that particular role? That needs to be enough. No matter what they thought of me, no matter if they thought I was or wasn’t “right”. Especially if I’m seeking peace and happiness in my life. Look, is it always *enough*? No. But it should be and it’s worth working on.

You don’t get a phone call after an audition unless you get the job (read: result) but if I only counted the roles I booked as my successes, I’d be a ginormous failure. This sometimes makes for uneasy cocktail party conversation when people ask what I’ve been up to lately (“Um…auditioning lots and working on letting them go afterward…?”) It’s so freaking easier to have a concise sound-bite-y THING to answer in those moments, something that people can quickly understand. Even better if it sounds successful. People want results at cocktail parties (and it’s not easy to talk about the exploration of oneself while juggling a glass of merlot and a chicken skewer).

We are so conditioned to define our success/creativity/worthiness by others. Either by comparing ourselves to them or by giving in to what they think of us (cocktail parties included). What a revolutionary notion to cultivate an inner knowing instead. It takes the emphasis off the result and puts it on the process. And then there are way more things to celebrate along the way instead of merely the End All Be All Result. This is not an original idea (even I’ve said it before) but there is so much momentum in the collective consciousness that I feel it bears repeating. Often. Joy in the journey, people!

But then, hey, sometimes I get the job (result!), and the shooting part is a let down. Or let’s say it’s great and I enjoy the journey of shooting it (result!) and feel super accomplished (result!) then learn that the show gets cancelled before it airs. See? there is no scenario where this journey thing doesn’t apply. If a girl wearing a bikini on a new CBS comedy falls in the forest and no one is there to watch TV did it ever happen? Yes! It happened. And I have to choose to believe that I’m better for the experience of it all.

So. Here I was pondering all this. And then I came across this wonderful letter Kurt Vonnegut wrote and I think/hope you will enjoy it as much as I did/do/will forever………….

In 2006, a group of students from Ms. Lockwood’s class at Xavier High School were given an assignment to write a persuasive letter to their favorite author, asking them to visit their class. Five of them chose Kurt Vonnegut. This was their only reply:

I thank you for your friendly letters. You sure know how to cheer up a really old geezer (84) in his sunset years. I don’t make public appearances any more because I now resemble nothing so much as an iguana.

What I had to say to you, moreover, would not take long, to wit: Practice any art, music, singing, dancing, acting, drawing, painting, sculpting, poetry, fiction, essays, reportage, no matter how well or badly, not to get money and fame, but to experience becoming, to find out what’s inside you, to make your soul grow.

Seriously! I mean starting right now, do art and do it for the rest of your lives. Draw a funny or nice picture of Ms. Lockwood, and give it to her. Dance home after school, and sing in the shower and on and on. Make a face in your mashed potatoes. Pretend you’re Count Dracula.

Here’s an assignment for tonight, and I hope Ms. Lockwood will flunk you if you don’t do it: Write a six line poem, about anything, but rhymed. No fair tennis without a net. Make it as good as you possibly can. But don’t tell anybody what you’re doing. Don’t show it or recite it to anybody, not even your girlfriend or parents or whatever, or Ms. Lockwood. OK?

Tear it up into teeny-weeny pieces, and discard them into widely separated trash recepticals. You will find that you have already been gloriously rewarded for your poem. You have experienced becoming, learned a lot more about what’s inside you, and you have made your soul grow.

God bless you all!

Here’s to soul growth! And to becoming! And to the Mystery of it all! And to more meaningful cocktail parties!
xoxo,
jolie

{thanks to Shoko for bringing this to my attention! And also to letters of note}

Hi:) I’m Jolie. I’m a working actress living in Los Angeles with my husband and pooch.

Do you know what it’s like being an actress in Los Angeles? It’s simultaneously:

Not unlike your Grandma taking you to have the expert photogs at K-Mart work their portrait magic after dressing yourself in a rad 80s outfit (see above).

When Show Business is good, it’s really good. But when it’s been a while between jobs, you’re so desperate for a creative outlet that it’s not uncommon to pin all your hopes and dreams on, say, a small guest-star on a CSI:MIAMI episode, fully believing that it will express all you have to offer as a creative entity. This can only end badly. Especially if you’re shooting all day on a small, musty boat getting tangled split-ends and active rosacea from the whipping, salty wind.

After many years and many CSI:MIAMI moments, I made a concerted effort to take all my eggs out of one basket and spread them around: I learned the true value of having a hobby. I took up knitting and couldn’t stop. I always liked to cook so I enrolled in a 20-week cooking course. It was such a relief to find other things to enjoy. And in both cases, having a desire to create something and then see it through to an end result was tremendously satisfying. I didn’t have to wait by the phone for my agent to tell me I could. Feeling bolstered, I started writing more, tweaking recipes, documenting my experiences in the kitchen and out in the Crazytown that is Los Angeles.

I love to act and play other people but Joeycake is all me. 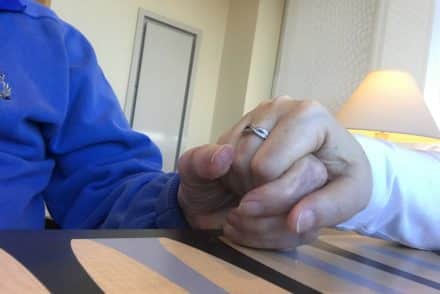 Wayne Dyer’s Daughter Reflects On Being Raised By Spiritual Parents.