Right now, I am on Cape Cod-staying in the home of a good friend.

This friend (who shall remain nameless) is living what appears to be the “perfect” life.  She has a terrific, loving husband.  She owns her own business.  Her home looks like it could be showcased in an interior design magazine.   If life is a race, she’s leading the pack.

My friend with the home on ‘The Cape’ makes her living as a problem solver for people and organizations.  She has perfected her ability to listen, assess and prescribe solutions that work for her clients.  She is also a Class A manifester.  In other words, she makes shit happen.  She knows how to get stuff done.

So why am I going on about this?

My friend is navigating through a big issue right now in her personal life.  She’s about to go through a major surgery that will permanently close the door on her ability to conceive a child.  Although she’s had a few years to gradually accept that birthing a child is an unlikely outcome for her, this surgery will transform unlikely into virtually impossible.  In a way, it’s as if she is suffering over the soon to be death of her un-conceived child(ren).

What happens when the problem solving, inspirational, motivational, get-it-done, positive, have-his/her-shit-together person is in crisis? Who do they turn to when life throws them a curve ball?  Are they so wrapped up in being the problem solver, life-saver for other people that they gloss over their own need for help when they really need it?

Some of us are so wrapped up in trying to think or be ‘positive’, that we do our damndest to bury the ‘negative’.  The problem is that when we bury something within ourselves, we’re keeping it.

Let’s think about shit for a minute—as a metaphor.

Shit stinks.  It’s nasty.  It is the un-needed, nutritionally bereft by-product that we wish to remove.  It’s also a part of life.

Our vernacular is very ‘shit’ friendly.  We use that word to describe:

“I’m going through some shit”

Shit is shit.  You can’t polish shit.  Well…you can try, but polishing it doesn’t make it less shitty.  It is what it is.

My friend is going through some shit in her life.  The worst thing she can do is try to keep it to herself.  Can you imagine trying to keep yourself from shitting???  You’d eventually die.  Shit is meant to move through us.  It is waste product.  It’s what we don’t need and yet, it’s a necessary bi-product of the stuff we DO need.  Shit is meant to be disposed of.  It’s not meant to stay hidden within us.

If we are having a tough time getting rid of our shit, we may need to ask for help.  It may be that we are processing life in a way that is causing us problems.  We may need more fiber, less sugar, consistent amounts of this or a hint of that.  If we are feeling shitty, we may be well served to share with other people who are equipped to help us move things along.  We may need help distinguishing between nutrition and waste.

Is there anything in your life that causes you to feel shitty?  Are you keeping it to yourself?  Are you polishing shit and passing it off as something else?

My friend from The Cape is always available to help me navigate through my own garbage.  I can call her for just about anything.  She also knows that she can come to me to discuss anything.  I have been a coach for her and she has been a coach for me.    Our relationship has been forged and strengthened because of our willingness to discuss our crap without wallowing in it.  We LISTEN to one another generously.

We will all do well to surround ourselves with people who can help us process things that don’t serve us.  As long as we are open to sharing our shit with the world, we can live big, healthy, fulfilling lives.  If the days of holding on to our shit turns into weeks, months and/or years—we won’t be able to operate at our highest levels.

Do you want to operate at your highest level?

If so, you can do the following:

2.     Talk about it with a trusted advisor/therapist/friend.

4.     Move on powerfully, in the direction of your dreams, feeling lighter.

Also, there is an added bonus.  When we follow these steps, we are also inspiring the world around us to do the same.  Can you imagine how wonderful the world will be once we all dispose of our un-needed waste properly?

Tim Heath Leuzarder is a New York Based Writer, Actor, Director, Coach and Sales Professional.  His one-man play, “Mentor-ized” has enjoyed sold out performances in 2013 at the United Solo Festival, The Barrow Group and The People’s Improv Theatre in NYC.  The show (in which Tim portrays 9 characters) is a dramatic comedy geared toward inspiring audiences to follow their dreams.

He is currently producing and directing the documentary, “Skipping Joy” with Unlikely Hero Productions (www.skippingjoy.com).  The film, which takes a deep and humorous look at the universal practice of skipping (as in…to skip down the street), is slated for completion in early 2014.

Tim is also a certified life coach, hypnotist and NLP practitioner.  He has worked with artists and sales professionals who want to break through personal barriers to achieve more in their careers.  Tim is interested in taking his knowledge of coaching, sales and the arts to create fun, entertaining, and hopefully poignant works of writing, theatre and film. 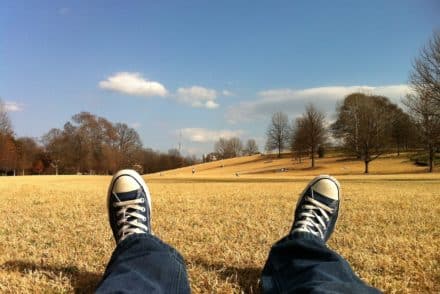