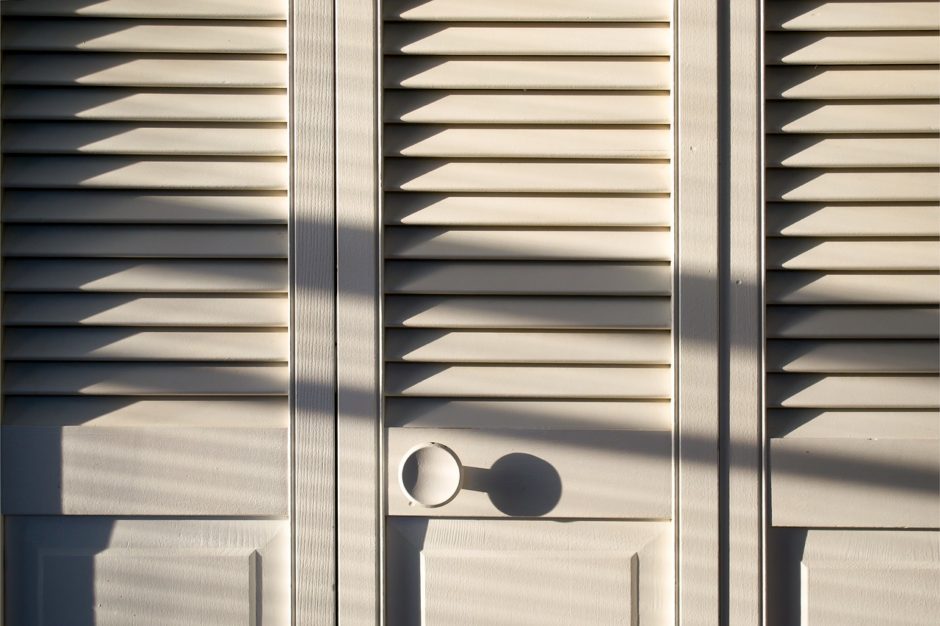 Your father just shoved you into his bedroom closet and slammed the door, entombing you. You tell yourself to get a grip, but your ears still pound and your hands still clench. You pant through your nose, purse your lips, squeeze your eyes shut, and grit your teeth. You do all of this so your head won’t explode like a watermelon rifled against a wall. So what, you tell yourself, this is nothing. Why not view it as a refreshing alternative to his usual forms of discipline? This one beats a harried chase through the house till he corners you in the dining room where you drop to the floor and curl up like a pill bug.

His fancy eel skin belt, the buckle flying, raining down on your back and thighs. In fact, when you think back through the fifteen long years of your life, as far as his punishments go, this shut-in-the-closet one is easy. It hasn’t involved belts, wooden spoons, or yanking of hair. So get ahold of yourself, calm down, and above all, do not cry. He hates that. He says it’s manipulative and that he’s way too smart to fall for what he calls crocodile tears. Whatever that means.

It’s Saturday afternoon and time for his nap. No one in your family will want to wake him once he falls asleep. Even as a toddler you knew not to go near him when he slept, but if you had to, to wake him for a phone call or because it was dinnertime, it was safest to stand at the foot of his bed, and say, Daddy, Daddy, several times with increasing loudness. If that didn’t work, then you would touch his big toe lightly, recoiling fast so he couldn’t clobber you when he came up from his dreams, arms swinging at imaginary assailants.

You realize you could be in here for hours. The door doesn’t have a lock; you could open it if you wanted to, but you won’t and neither will anyone else. Now that you’ve calmed down, you better find some way to entertain yourself. You slowly turn around and move your arms like you’re doing the wave at a football game until you find the pull chain to the overhead light. You wonder if turning it on is against the rules of his new made-up-on-the-spot punishment. You decide to chance it and pull the chain, real slow so it doesn’t make a clicking sound. The bare 40-watt bulb illuminates two identically tailored pinstripe suits, one brown and one navy, from Roos/Atkins, his favorite store, and lots of work pants and shirts from Penney’s and Sears.

On the floor are his polished black dress boots and his dusty work boots—the ones he whistles for you to come and remove from his feet when he gets home from work. You quell the urge to kick his stupid shoes and yank his dumb clothes from their hangers because you know your father can go from charming to ballistic in less than a second without discernible provocation. This would be too discernable an act of provocation. You could go through his pockets—maybe there’s something interesting in them—but he’d know you looked, for he’s all-knowing or so he tells you and you can’t take that risk even though you doubt he would really know. You dare yourself to look in his jacket pockets anyway. Nothing much—a silver lighter, a toothpick, and a couple of pennies.

What is interesting is what’s lined up against the wall to your left, almost as tall as you are. Careful not to touch, you use your index finger to count them. There are a total of nine zippered cases of soft beige suede, each holding either a rifle or a shotgun. You don’t know what makes a rifle a rifle or a shotgun a shotgun. Is there a difference? You’d never realized he had this many, but then again, you’ve never hung out in his closet either. To your right are shelves he built. On the shelves are boxes and boxes of bullets and a pair of sheathed hunting knives. He’s got enough firepower to kill every deer, duck, and quail in the state of California, and maybe Nevada too. At least that’s what it looks like. He’s even got handguns nestled in boxes. You read their labels: .44 Mag, .357 Mag, and something called a 1911. Why the heck does he need all these? To sneak up on an unsuspecting pheasant? You think it’s extreme overkill to own so many guns and smile to yourself at your wittiness.

You hear the thwack, thwack of a tennis ball being hit back and forth. Your father, now lounging on his bed atop a faux fur bedspread the unnatural color of a teddy bear, smug in the knowledge that his oldest daughter is confined ten feet away, has resumed watching the Wimbledon finals, a match between Jimmy Connors and Arthur Ashe. You hear him fire up a Camel no-filter. His chain smoking makes your family and your house smell like you all roll around in dirty ashtrays.

But back to the guns. He didn’t put you in here so you could peruse his gun collection, choose your favorite one.

For a moment you flirt with the fantasy of hurting yourself, but it seems too obvious a move given the situation. Too bad you didn’t pay more attention when he first showed you how to load his BB gun, then how to aim and shoot at the paper target he’d taped to a stepladder in the basement. A good starter gun he’d called it. You’d bawled and made it clear that unlike him, you weren’t interested in weapons or hunting or killing animals. Besides, your eyesight is so bad you didn’t even come close to hitting the target itself let alone the bullseye.

To kill time, you imagine the headline in the San Francisco Chronicle, if you successfully loaded a gun, and managed to fatally shoot yourself in the closet’s three-by-six-foot space. Poor Misunderstood Girl Shoots Self Dead in Father’s Closet. Now you’re feeling sorry for yourself. How about Trapped Teenage Girl Shoots Self Because of Idiot Dad and Stupid Family. Your attempts at amusing yourself wear thin, and you collapse down to sit cross-legged on the cherry red shag carpet to wait him out. You cover your face with your hands.

You’re lulled into sleepiness by the sound of the television audience’s polite applause and the announcer’s soothing voice as he loudly whispers Love, Fifteen. Your dad’s rooting for Connors. You think Connors is a hotheaded jerk and hope he loses to the black guy Ashe. If your father knew you were dozing during your punishment, it would anger him even more. You don’t want to do that because he can be inventive. Besides his trusty belt, he has a dog whip for special-occasion infractions. It stings like hell and leaves the nastiest welts, worse than the belt buckle. He’s careful to hit you above your knees so the marks aren’t visible below your skirts, but his thoughtfulness doesn’t keep you safe at school. It’s against the rules to take your gym clothes into a bathroom stall to change, but you do it anyway. You don’t have a choice, you have to; you know instinctively that if anyone were to see your body, it would be too difficult and embarrassing to explain.

“Manuel. Wake up. Ashe won, but Wide World of Sports is about to start or maybe there’s some soccer on. Want me to get you some Sanka?”

You’re happy Connors lost. Then you hear the jingle of the keys that hang from your father’s belt. A sound that elicits fear in your family because it tells you he’s coming but doesn’t telegraph what mood he’ll be in when he gets to you. The closet door opens before you can jump up to pull the chain and turn off the light. You pray he doesn’t notice.

He looks down at you on the floor. You look up, squinting against the daytime brightness. You pull yourself to a standing position using the ammo shelves as leverage. Your legs don’t quite cooperate. You remember to drop your eyes to the carpet because looking directly at him is considered a challenge to his authority. Yes, I’ve had enough, you tell him, because that’s what he wants to hear.

“Good, I hope you learned your lesson,” he says.

“Can I get back to my algebra homework, Daddy, please?” you remembered to say please.

He flicks at a speck of cigarette ash on the ratty terrycloth robe he wears over his work pants.

“Say sorry to your brother then go make me some Sanka. Not too hot, and don’t fill it too full either.”

You raise your eyes at the sound of your seven-year-old brother’s voice. Across the bedroom, he stands next to your mother and little sister, his arms folded across his chest like an angry genie-child denying wishes. You grit your teeth and take a deep breath through your nose, careful to keep your face blank. He is the worst brother anyone could ever have in your opinion, but you don’t want to sit in a gun-filled closet for the rest of your life so you apologize to him.

“I don’t believe you,” he says, tapping his foot for emphasis.

“That’s enough Mark,” your mother says, “she’s been in the closet for hours.”

You blink your eyes slowly and force your mouth into what you hope passes as an apologetic smile and try again.

Your brother looks at your father, then back at you and states, “I can come in your room anytime I want.”

You admonish yourself to stay calm. Yes, your father shut you in the closet because you yelled at your do-no-wrong brother, interrupting an important tennis match, as well as your homework; however, this closet punishment trip wasn’t so bad, you handled it.

“Sure, anytime you want, Mark.”

He smirks with triumph.

You remind yourself that in three years you’ll graduate high school, you smile for real at the thought and head to the kitchen to try to make your father the perfect cup of Sanka.

Singer and songwriter Adele Zane was born in Brazil, grew up in the San Francisco Bay Area, and now lives in Brooklyn, New York with the fine artist Richard Rosenblatt and their rescued terrier, Wally. She has taken memoir writing classes at both FreeBird Writing Workshop and Gotham Writers Workshop. 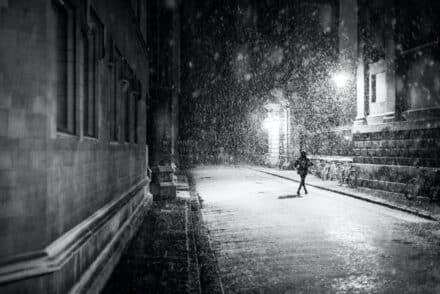 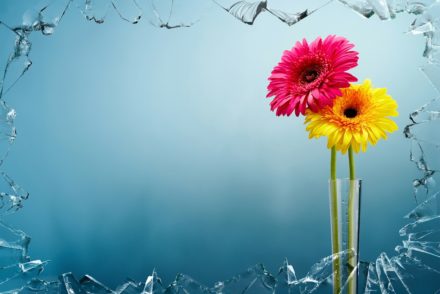 There Is Nothing Wrong With Broken