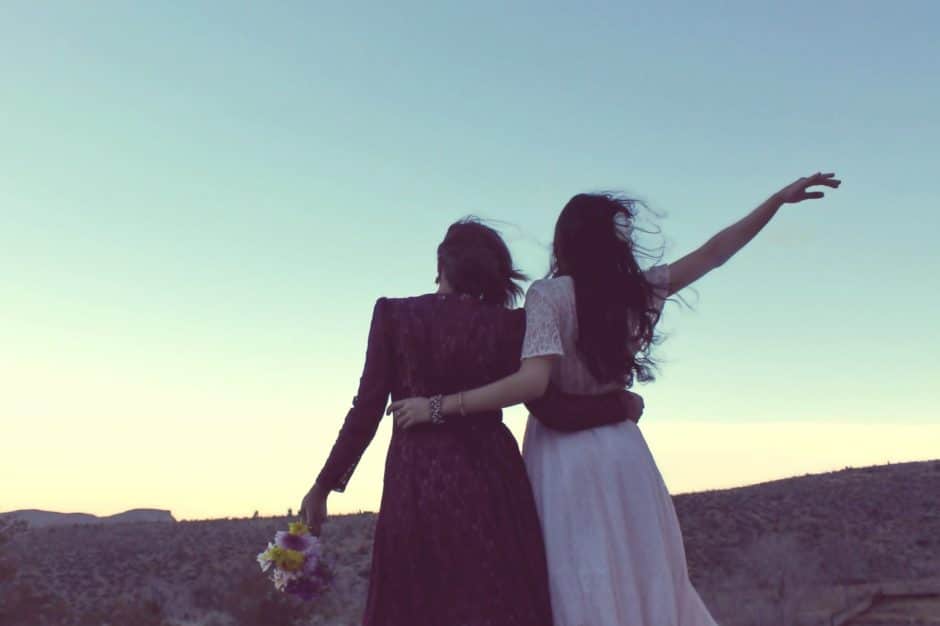 From the couch in her office, I can hear my younger sister, Michelle, talking to my mother, their voices muffled by one wall and the earplugs I am wearing.

I scowl into the darkness. Nearly eleven pm and I have only slept a handful of hours in the last few nights, and for the record, I ingested no drugs or alcohol that day.

But there was plenty of drinking before today, plenty of group crying and my own overflowing emotions, simultaneously sharp as a pin prick and nebulous as a dream, the way I’ve learned life becomes when you are smacked in the face with unexpected death.

My sister has lived in California for nearly six years and despite the fact that I’ve been invited, I’ve never visited before. The rest of my family has left Los Angeles for their respective homes in the Pacific Northwest, and my mother and I are the last two left. We aren’t ready to leave Michelle alone after losing her partner just two weeks earlier.

At two am, the morning after Halloween, my sister went looking for her boyfriend outside when she discovered he wasn’t in their apartment and found a group of people and the police twenty feet from her front door. The police had already cleared his body away from the place where he had landed.

Michelle and I were not exactly close growing up. Two years my younger, she aimed to please, to make me laugh, but I found her annoying and needy. Sure, when I was so scared of talking to strangers I couldn’t sell chocolates for a school fund raiser, she went door to door and sold all of mine for me. And when I was presented with a beautiful white plush bear holding a red heart, I briefly considered that she deserved it more than I did, but I kept it, and she never complained.

She followed my direction whenever the opportunity arose. As a six-year old she danced in a too-small white swimsuit covered in hearts with her nipples peeking out over the top, twirling a purple umbrella. I held a hairbrush to my mouth and lip-synched Little Egypt by the Coasters, instructing her to prostrate herself on the floor as I announced, “She walks, she talks, she crawls on her belly like a reptile.”

In high school, when I took her to the park and made her smoke a cigarette with me, she determined to finish it through coughing fits, ever the loyal sibling.

But I didn’t understand her, didn’t know why anyone would do something simply to please someone else. Everything I ever did was for my own ends. I was quiet, kept to myself, didn’t expect a lot from others, and imagined they didn’t expect much from me. As a young girl I begrudgingly gave up the very underwear I was wearing to Michelle, when on a trip to the park my mother discovered she had none on, and since she wore dresses and I wore pants, I naturally had to give up the undergarments.

Growing up, Michelle evoked repulsion, and what I now recognize as fascination, in me. In our childhood home she used to leave wads of gum all over the place. On dirty plates in the kitchen sink, in the corner of a bookshelf, and in the bottom of water glasses. These weren’t little clumps of gum either. They were monstrous globs of two, three and sometimes more pieces of the big Hubba Bubba squares chomped down into doughy, pale, fleshy pink and ash blue things that looked like small, mysterious, dead organs.

Michelle’s emotions were as raw as the pieces of meat those wads of gum resembled. She was loud and physical. If you didn’t agree with her, you might get a remote control flung at you, or a foot in your stomach. She yelled at our father, who had custody of us, for forcing us to pray together, for not giving her his credit card, for not spending enough time with us, shooting daggers from her thirteen-year-old heart at him, as my brother and I cowered in the corner.

As we entered adulthood, I talked at her like it was my God given right to have a bottomless word receptacle in the form of a little sister, filling her with the thoughts, ideas and stories that she treasured in our childhood, that I could share with few other people, but now she told me I talked too much. She told me I drank too much. She continued to steamroll me, and others with her beliefs, until I eventually made it my aim to avoid her altogether.

But despite our differences, in our late teens we unintentionally formed a great bond when I gave her a few of the pills I had gotten from our doctor-father, the ones whose floaty-detached effect we grew to love. My dad gave us the boxes of samples he got from drug reps, perhaps his naïve way of placating two young-girls-of-divorced-parents, and we took them, cutting out the butterfly logos – more magical than unicorns and fairies – and hanging them on our bedroom walls. Later we learned how to order the drugs on our own off of the internet. Michelle never hoarded pills like I did but was always willing to share. And for years into our early adult hood, I knew that if I said the word she would send me a supply in the mail.

When I heard about what happened to my sister’s boyfriend, the man she had lived with for three years and whose son she was helping to raise, we had only just begun to repair our own relationship. We had been talking about struggles with sobriety, both our own and her boyfriend’s, and my sister had driven to my house in Seattle from Los Angeles just one month earlier to console me after I had lost my third pregnancy.

I travelled to LA with the intention of being a good big sister, of doing what was necessary, my duty. But when I arrived, all I did was drink and wallow in my own self-pity. Michelle was the one standing strong, entertaining guests, and even making plans to go back to the gym where she and her boyfriend had worked.

It’s true, I ingested nothing the day my sister accused me of being on “something.” But while my sister had remained mostly sober and appropriate those initial days, almost appearing “together,” I had stumbled around in a daze, hungover from drinking and using and from life. I wasn’t exactly supporting her.

I call to my mother from my couch-bed in the office after I think I hear what I couldn’t have possibly heard. And when she comes to me, and I ask her what Michelle has said, my mother stammers and begins to make excuses, until I say, “It must be true.”

My mother sits at the end of the couch with her hand on my leg and tells me to go confront my sister, to tell her I have not been on drugs. But I roll my eyes into the dark, exhausted and refuse.

And then I shout at her through the wall, “I did not take any drugs today!”

There is a pause, and then she yells back.

And with those two words something happens.

Amidst her own grieving, perhaps because of it, she seems to have let down her guard. I can’t remember the last time I’ve heard her say those words. And here she’s volleyed an invisible message in a bottle through the wall separating us, across time and space and all the stories about each other we have. Let loose words like one small thrust of a pick-axe against an old stone barrier. Something was giving, letting go and breaking down. Her strength, which had always kept her pushing forward, was taking a pause, maybe so that I could catch up.

In that moment, somewhere deep in my gut, I understood she was there with me, separated by our own secrets and shadows, but reaching out toward each other, like when we were young and I allowed her to hold me in bed, allowed myself to be enveloped in sappy-sister-smell and bony knees. She was still the selfless girl who would do anything for me, while I had been completely consumed by my own luscious, sticky victimhood.

I declined to go watch television with her and my mom after being invited into the living room, but we did go to lunch in Hollywood together the next day after my mother left. We drove through sunlight on wide, palm tree lined streets from Venice up to Santa Monica Boulevard and through Beverly Hills listening to loud music as she pointed out the places she had lived and been to since living in L.A. Then we sat together on an outdoor patio on a beautiful November day, sharing her overstuffed omelet and my seared tuna. We were going to order mimosas, but oddly the restaurant was out, despite the sign to the contrary. So instead we shared a diet coke and began to talk about where to go next.

Bernadette Martonik is a nanny with an English degree who takes writing workshops and classes as frequently as possible. She is an emerging writer with an upcoming publication in Stone Pacific Zine, and has been published in the Gonzaga Bulletin and their literary publication, Reflections. She has also self-published. Bernadette lives in Seattle with her husband and their dog, Bandit. She can be found on Instagram at @sisterstonic. 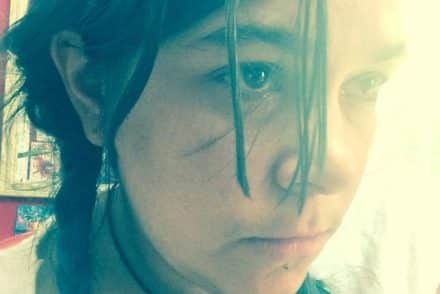 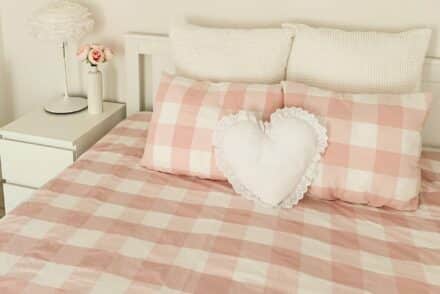 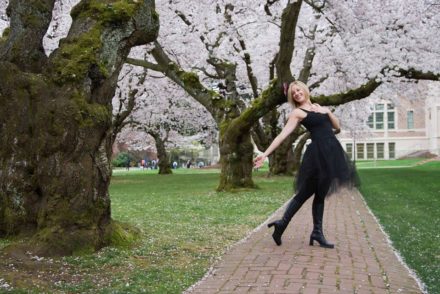