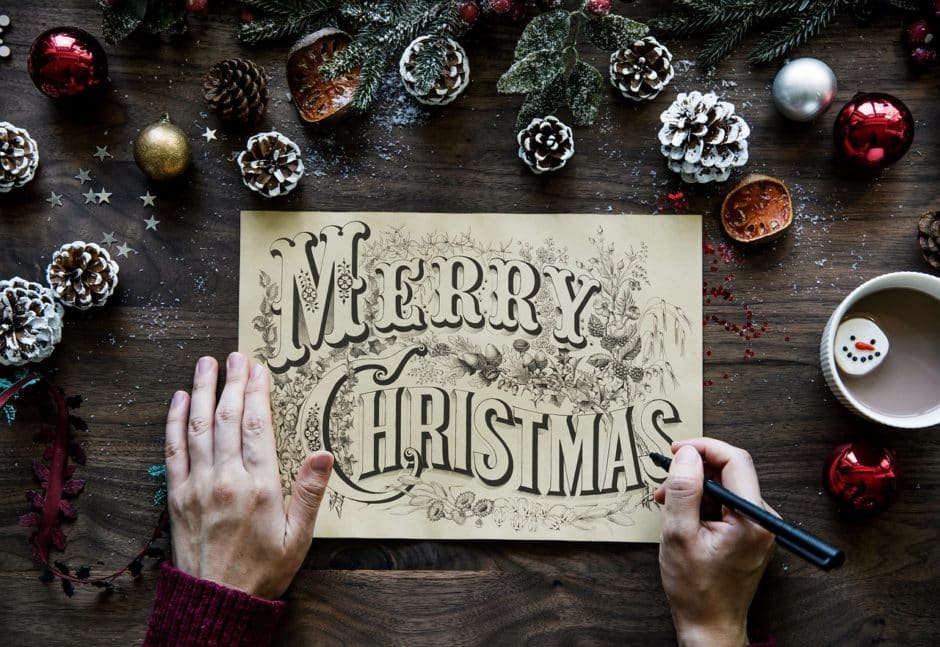 During my twenties, I signed cards and saluted acquaintances with the slogan, “Happy Holidays!” Saying “Merry Christmas” in the nineties in New York City felt retrograde, even though I was a Catholic. It lacked the carbonation of “Merry Christmas,” but “Happy Holidays” accommodated everyone: my Jewish friends, who were many, my Muslim students, my agnostic neighbors (the former-Catholic-future-Catholics), and my one atheist friend, who was too busy reading to take notice.

The truth is, none of them noticed. They were neither offended nor impressed whether I said “Merry Christmas” or “Happy Holidays.” But I trudged on with my forward thinking, sterile greeting for a few more years until discovering that speaking in my mother tongue, saying “Merry Christmas” with all its emotional density, was a radical act of love, connection, and, maybe, political resistance to conservative efforts to control the narrative of who we liberals are.

In 2000 my husband (whom I referred to in those days by that lusty label, “partner”) invited his Puerto Rican family to come up from Brooklyn for our first Christmas in Syracuse, which really flexed its muscles that winter. Naturally there was a storm, and of course no car in the motorcade had snow tires, but they arrived alive, if paler.

We tried to get our fireplace to work for ambience more than actual warmth — my father-in-law had cranked the heat well past 70 upon arrival and never took off his hat — but it only filled the house with thick smoke. A few cups of coquito, Puerto Rican eggnog, toasted the atmosphere, so my husband passed out Spanish lyrics to a few Christmas carols. I’m Irish, and singing melancholy songs with maudlin people who are in their cups is home to me, but my in-laws were a less lugubrious sort. I was a little nervous about forging a new tradition before they’d recovered from their harrowing journey to this side of the George Washington Bridge.

The riot of bottles and gifts and smoke settled to a hush as we sang “Silent Night” in Spanish. Every voice lifted, making the place actually quieter than it had been all evening. Of course I knew the tune, but the lyrics didn’t translate exactly: “Noche de paz, noche de amor” (Night of peace, night of love). The words were inconsequential, though, because the song was in our hearts.

In those few minutes, all the longings for innocence and connection to which both religious and secular symbols speak were fulfilled. At the end, a lull fell like soft snow, a Christmas miracle in a Puerto Rican family. We didn’t try to sing another song, lest the spell be broken.

My mother-in-law placed her drink on the table where all her beloveds sat, her husband, her sister, her son, and said, “Feliz Navidad,” her voice as thick and sweet as the coquito. As the only person in the room who didn’t speak Spanish, I was grateful she expressed her deep heart in her own language. I recalled the first time I’d met my husband’s grandmother and shouted “Hola!” practically with a curtsy. Abuela didn’t try to conceal her amusement when she responded, “Hi.” We don’t need to work so hard to sincerely acknowledge each other’s existence; isn’t it a little alienating to guess the desires of others rather than letting the words issue naturally from our humanity? I didn’t feel excluded when my mother-in-law wished us “Feliz Navidad”; on the contrary, I felt welcomed into an intimate circle. The wish has made me hope every year since for another one of those magical moments that defy language, when Christmas humbles us, not in the way an icy road does, but in the way that seeing our own face in another does, when we’re singing together.

Through the eight years of George W. Bush’s presidency and the eight years of Barack Obama’s, I said “Merry Christmas” without worrying whether I was offending anyone. Because I wasn’t. The words floated from the same source of love that inspired my mother to give me a doll each Christmas right through high school. How could you be annoyed by such sincerity? The answer is: you couldn’t.

But Trump. He and his well-powdered elf at Fox News keep trying to get me to stop saying “Merry Christmas” by declaring that there is a “war” and assigning me my role as a progressive. I felt this pressure acutely last week when I brought soup to my neighbor Phil, whose aggressive Alzheimer’s has rendered him speechless in less than six months since diagnosis. In the twenty-year friendship I’ve had with him and his wife, we’ve managed to avoid political conversations that might force us to cling too tightly to our ideological weapons: their conservative guns, my liberal arrows, though in church, where my family sits behind them, I change the words “for us men and for our salvation” to “for us people.” They have loved us despite that and despite the signs in our yard during election season. In fact, while performing his weekly weed wacking of the hard to reach spots on our property, a task he had done for years without being asked, Phil trimmed the grass around our “Hillary 2016” as carefully as he had around his “Trump.”

As I was feeding him his soup, I thought of the bittersweet irony of this arrangement. When I first moved next door to Phil and Annie, I had three children under the age of four. Annie would often appear in my kitchen during a bona fide shit storm, and magically get a meal down their recalcitrant throats, giving me a moment to put on a bra and even brush my teeth. Now, here I was, not nearly as adept as she had been at the task, but trying.

Just then, from the living room TV, louder than bombs, the Fox News sirens started ranting that the “War on Christmas” had been taken to a “new level” by The Huffington Post which had tweeted that ‘Rudolf the Red Nose Reindeer’ promoted bullying. I typically ignored such bait. But I couldn’t resist this time, so resentful was I that Fox was spewing its poison into this moment with Phil.

“You know that’s bullshit, right?” I said to Annie.

“Oh no, Amy, it’s not. You don’t know, or maybe you do. The liberals are terrible with the things they’re trying to do. They don’t even want us to say ‘Merry Christmas.’”

“Annie, it’s a tweet from Huffington Post. Is that even a legitimate news source? This whole news story is based on some random writer’s opinion. I could have tweeted that,” I said wiping Phil’s chin. “Have you tried ice cream? He might like that better than the soup. And not for nothing, the Santa in ‘Rudolf’ is not much nicer than the classmates in ‘Carrie.’”

Now why did I say that? Why did I let Fox News and Trump sully our sacred space of friends keeping each other company through the big moments with their spite and their rules about what hats we must wear. You could almost hear them chanting, “Fight! Fight! Fight!” as Annie defended the conspirators and I defended an idea that in another context I’d dismiss with a WGAF?

I went on my own rant about how their motivation is not to defend Christianity; Trump and Fox don’t give a shepherd’s cold ass about Christianity. The substance of their fabricated conflicts is irrelevant; what matters is that there is one to polarize us from each other. And they had succeeded, at least in that moment, to do just that with Annie and me.

In Nikki Giovanni’s poem, “Nikki Rosa,” she writes, “And even though they fought a lot, it wasn’t your father’s drinking that concerned you, but only that everyone is together and you and your sister have happy birthdays and very good Christmasses.” The expression that life’s longings and losses find at Christmas, the hyperactivation of the vagus nerve throughout the season, these are threatening to Trump who works tirelessly to castrate the heart from reasonable people.

It’s like what George Bailey says to Potter about the Building and Loan. “You’re talking about something you can’t get your fingers on and it’s galling you.” Christmas galls Trump. Remember the year you got the Chrissie doll with the hair that grew and grew? How you camped out on your top bunk and played with her until the rest of the family was asleep? Or that year when you really wanted Wranglers and your poor mother could only swing a swanky pair of Rustlers, and you pretended they were just as cool? And that one year? Your dad’s last good year before he got sick, and you and your siblings didn’t realize how hammered you were until you were held hostage in the pew at Midnight Mass, and you could not. stop. laughing? And that year when the intimacy of a Christmas carol transcended barriers of blood, culture, and language? This is what Trump can’t get his fingers on; moments, sentences with no ‘but’s, only ‘and’s, so he needs to declare war on it.

The greatest threat to Trump’s divide and conquer strategy are the people who refuse to retreat to their designated corners: liberal/conservative, Christian/Jew-Muslim. According to Boston Herald columnist Joe Battenfield, this hardly ever happens. In responding to the possible “Unity Ticket” of Joe Biden and Mitt Romney he writes, “It’s not going to happen. America is not unified, and doesn’t even want unity. We like our disunity just fine, thank you.”

We need to walk away from the corners where the labels are, and move toward the center where the people are, in their Santa hats and yarmulkes, their habits and burkas, topis and kufis and zucchettos, giving dolls to skeptical teenagers, feeding each other, and without spite, saying “Merry Christmas” or whatever comes from a place of best intentions.

Amy Doyle lives and teaches in central New York.  The youngest of thirteen children and mother of three, she is working on a collection of essays entitled “Eternal Daughter.” Her work has appeared in Literary Mama. 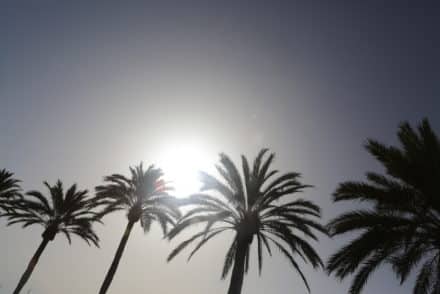 The Colors of California 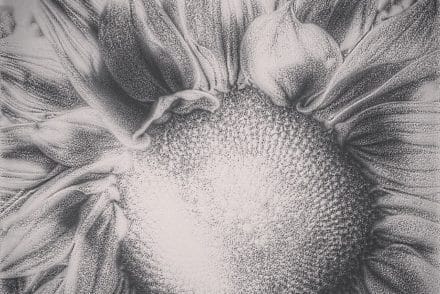 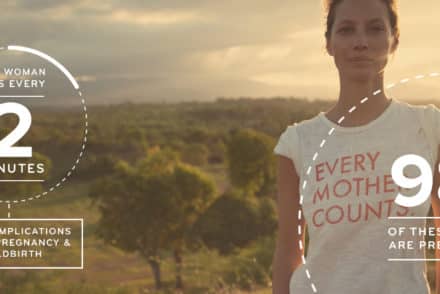