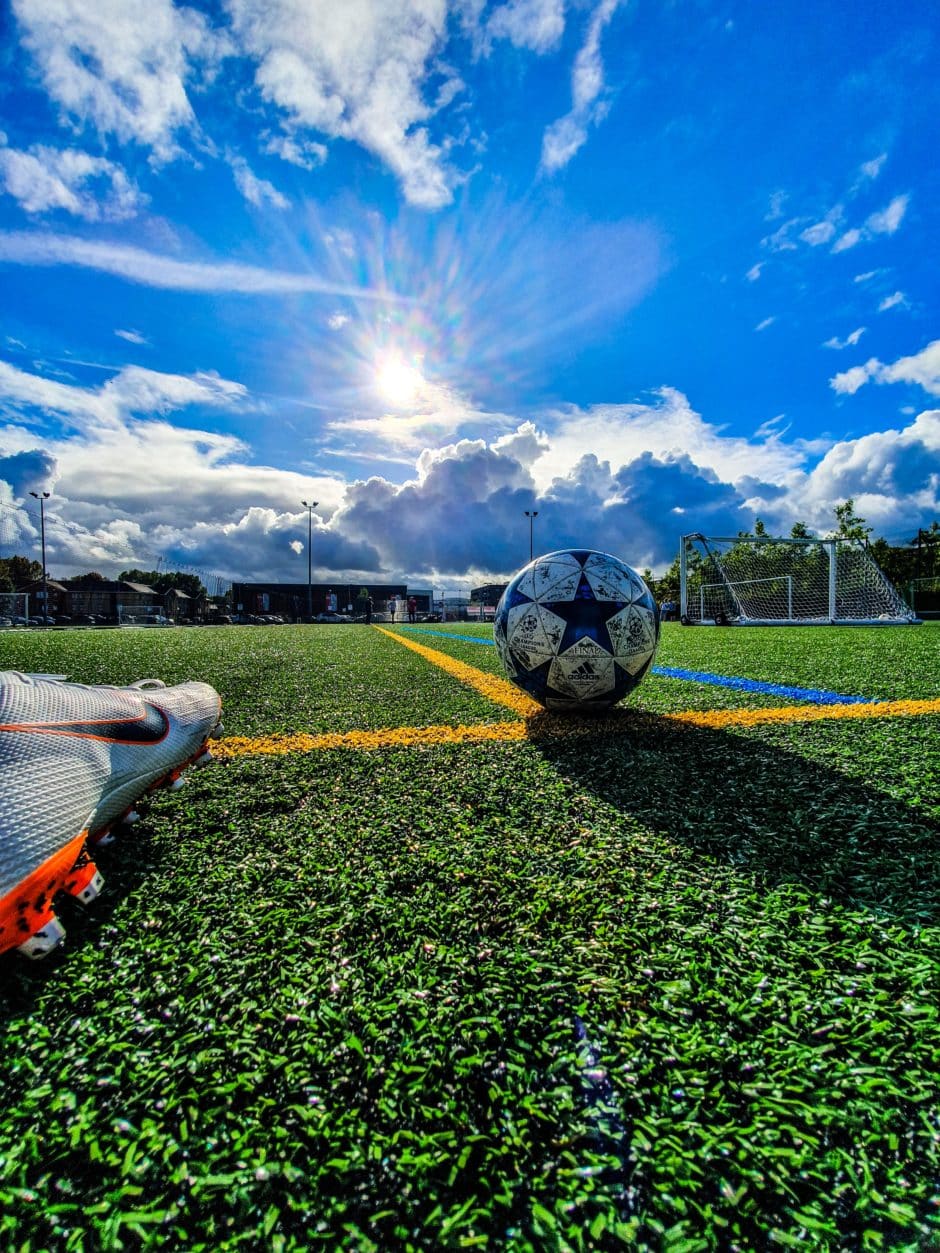 The buzzer sounds as I pull up my white soccer socks. It’s freezing; I can see my breath.

Inside but outside. An old airport hangar converted into a three-field soccer complex.

The game is a few minutes late to start, people like ants piling on to the pitch.

It’s familiar territory, this kind of a field; my home for at least 20 years of my life.

Suburbia 80’s soccer: Members Only jackets on the sidelines; my mother, her frosted hair and Reeboks cheering and clapping as we whizzed by. Kids running around orange cones or picking flowers in the corner. Learning to kick. To run.

High School: Hot sun and short shorts. Boys. Are the boys looking? Here comes the boys team. Learning how to play dirty. Sitting on busses. The spaghetti dinners and “We will Rock You” piped through the PA. Warm up tapes, mixing the power of Public Enemy and Led Zeppelin. It was theatrical: the show, the spectacle instead of the game. There were parents in the bleachers; my father at every game. Home or Away, home or away. On the cusp of a bigger game.

College Soccer: Always away; so far from home. Different state, different soil. So many sprints. Practices that were competitions. Late nights lit by black lights and Rage Against the Machine in cement block dorms rooms. Hung over mornings that began with pushups, noses tickled by fresh mowed grass, trickling temple-sweat. It was four years too long.

The muscle, the memory. That competitive monster. It does not fade.

And now, present day: Indoor and on the team. 43. I’ve returned. I’ve paid my dues. I paid my registration fee and there won’t be a trophy. Or an end of season banquet where we don something other than sweats and eat Chicken Marsala in a Holiday Inn conference room. 40 year old soccer is having carpet burned knees and burning lungs. After-game pitchers of cold Coors Light and forty year olds circled around a table, talking about “sweet shots” and back slaps with Nice move out there! Sweaty socks, tiny turf bits falling out as we munch stale, hours old popcorn under buzzing fluorescent lights. It’s the joy of knowing I’ll be sore for two days; my husband tucking my babies into bed. Returning home to a quiet house. A lone, dim light above the oven, my midnight invitation to solitutude. A late, silent shower.

There is freedom on that field.

An ability to fly. Away from preparation, or list-making, or lunch-packing for others. The anchor of motherhood and other demons temporily lifted.

It’s a game and I’m playing.

And I’m just a mother running and running.

Running was my extra-curricular activity as a women’s college soccer player.

…about how much I hated playing soccer.

How much I hated my body for playing this game that was no longer a game.

I remember being a college sophomore in a dank, sweaty basement gym, floor fans blasting at 11pm.

My old monster: Working out. Losing all traces of myself.

Fanatically exercising. An hour plus on the Stairmaster was normal. Push down, push down, hold on, hold on. Whoosh, Whoosh, whoosh, whoosh.

Incremental Red lights on the machine dashboard, dots, Screaming: go faster! Push harder! Pulsing: Don’t slow down! 275 Calories to go! Dripping with sweat, my hands slipped off the black handrails. Add a scratchy white hand towel and the sliding became more comical: the towel and I slipping further down the machine. I prop myself back up, my sweaty body hunched over the machine in agony, pushing myself.

And this was after two hour practices on the college soccer field.

Self-sabotage. I had to work it off because bigger, stronger, meant fat.

I wasn’t. I was a muscular 20 year old woman playing a collegiate sport, feeling betrayed by her body’s strength. Where it showed; the armor I created. I needed the heaviness gone.

Why did I confuse strength with size?

The cycle continued for a year, my legs becoming chicken bones.

Can a competitive sport turn you into the opponent?

Trying to disappear, shaming myself away from my muscular thighs and too-strong arms.

To combat this, I:

ran at odd hours and ate salads with no dressing and drank hard liquor since my college friends told me there were no calories and wore too baggy jeans and woke up starving in the middle of the night and dreamed of delicious cheese-y lasagna all while I could not brush the stench of hunger from my breath.

There was a warped, seductive power in wearing a white v neck t-shirt with your clavicle peaking out. It screamed small. In control. Look at me, dammit. See me. I’m more than the game.

My body wanted nothing to do with this warfare. It didn’t fight back. It collapsed. A non-female body; period loss for a year and a half. Complete disconnection.

There was running. Morning miles and marathons. Hip flexors tight from repetitive repetition.

There was pulling: a row machine. Picking up: Black dumbells from their home on the rack.

There was pushing: leg lifts. A heavy bar away from my chest.

Mothering is its own kind of sport, birth the ultimate sporting event. There are not many spectators, but the world has a wager on you.

Growing big and small, and big and small. The weigh ins. Once, both of our growths recorded on charts, listening for two heartbeats and placing hands with measuring tape on bellies. There was a pre-game type of excitement, energy and even anxiety: delighted worry mixed with sweet longing.

Two different babies, two different births: a 15 hour overnight labor; a quick two hour event. No medications. Contractions that split my body from its core; hunched over on all fours. Reaching through legs to pull out my bloody heart.

I pushed, plumbing my body for a strength I didn’t possess. Searching inside, trying to get out of my own way.

And then, the after. Lightness. Relief. Like the athlete, there’s recovery. Loss of fluids, blood and energy. To be replenished.

There is a sweet decline. Loss. The gestational heft that buoyed you both, your plump – the admirable warrior who carried and grew another.

Then, moving on to figuring where you fit: new mom groups, old jeans. A new life.

The focus is on the baby. But it’s also about you. Where are you?

I made an intentional choice to be big, not small in mothering –  done listening to me tell me I wasn’t up for the job. I could no longer be steam rolled by my inadeqauices. Or my core-shaking anxiety: that my baby might slip through my fingers and fall on the hard wood. That I couldn’t drive with a baby in my backseat. The imagined terror that she would tumble off the overpass while strapped in the stroller. Or stop breathing without my hands lightly on her chest, feeling for movement at 3am.

I’m left to wonder about mothers, the wounds we have. The weight we carry.

Are we ever in control?

It’s what we all know: it’s work to keep the motherhood monster in the cave. The one that consistently tells us we’re not winning, but failing; we’re doing it all wrong and one step away from messing up our children. When I can’t control, I manipulate: my mind. My body.

I question my ability to protect my child. It haunts me at night. But I name my faults and know my weaknesses. I know the enormity of living a life. There, I find myself.

Motherless at 25, my body was betrayed. Again.

My stomach felt it first; a sucker punch to the solar plexus.

Aching: on and on and on, through the fibers of my interior.

Her body was betrayed, too: a stroke. So fast. Was there a chance for her?

For recovery, for a life?

After eighteen years of grief, I’m finally, nearly, out.

The body does, indeed, keep score.

There is emergence: the catalyst was my baby born on September 2nd. Also, My mother’s birthday. And, also, the day my mother died. Eighteen years before.

At the dawn of my daughter’s life, I’m taking my mother’s lifeless, leftover years and converting them into a kind of currency.

I’ll slide quarters into the machine

Put me in coach I think to myself.

I gather my curls and rake them into a ponytail.

I’ve loosened around my mother’s absence.

In returning to the void, I’ve found connection. Connecting me to her, me to my body. There’s power when you inhabit what you fear. Loneliness. Longing. My body used to be a container to evacuate, curse, question and crush. Today, I can embrace. Even when grief’s tentacles have taken over the ship, how we become our bodies dictates our course forward.

“SUB!!!!” I hear my teammate scream from the field.

I scan the field for her voice. I look to the clock: 2 minutes and 37 seconds left in the game.

I tuck my shirt in.

I’m looking forward to that field.

I wait for her to run over. She looks me in the eye, and our sweaty hands slap each other.

At the same time: “Good work out there” I said, starting my jog.

“You got this,” she says, breathless, winding her run down to a walk.

Let me out there, I think.

Watch out, I think.

I run towards the game.

I run towards the things I know.

Natalie Serianni is a Seattle-based writer, teacher and mother of two. Her work has appeared in Seattle’s ParentMap Magazine, Ruminate Magazine, Sammiches and Psych Meds, and various blogs and literary journals. Her writing centers on grief, gratitude and motherhood. 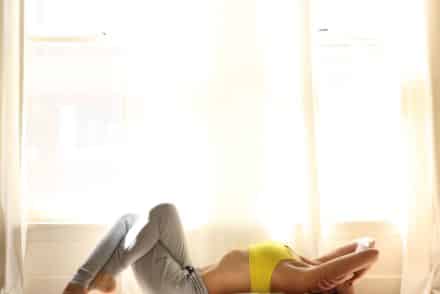 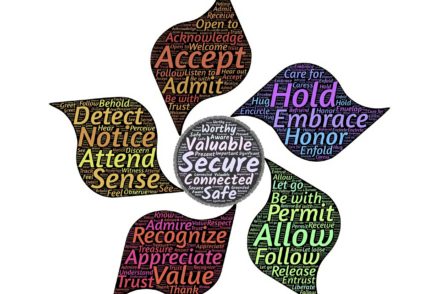 Akasha: When Your Kid Asks For More Space 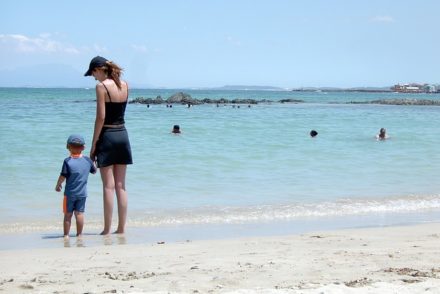 Wait, and Hurry Up