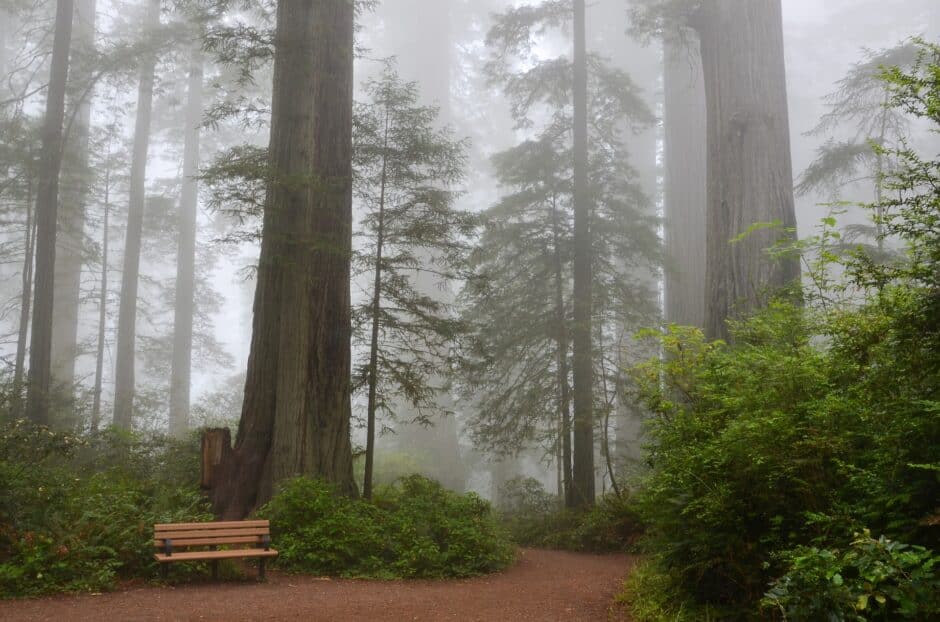 I live near an ancient forest. I know that it’s ancient because there is a small placard as you enter that reads “Ancient Forest.” My favorite species are the Coast redwoods, which tower over Sago palms spreading their stiff green arms, and the Australian tree ferns, which show off feathery plumes like proud strutting peacocks. Even through my mask, the woodland balm- a mix of warmed bark, musk, and spice- (a scent I am continually searching for in perfumes) loosens my shoulders and untangles the knots of my mind.

As a forest dork, I am fortunate to be tucked into a hillside with an abundance of nature. Monterey pines in which hawks nested for the last

three mating seasons and a Coast live oak, recognizable by her razor-sharp leaves that resemble dead beetles and make going barefoot impossible. But it’s those redwoods in the ancient forest that inspire me to use words like transcendental, metaphysical. Spiritual? I’m going to stop because I’m starting to sound like a box of tea. But only when I walk among them do I think to myself, Okay, maybe there is something to this God business.

In Japan, a researcher named Dr. Qing Li studied the benefits of spending time in the forest. He encouraged something he termed “shinrin-yoku.” “Shinrin,” means “forest,” and “yoku” means “bath.” Forest-bathing is “taking in the forest through our senses.” According to his research, trees release phytoncides- antimicrobial essential oils that purportedly boost the immune system. In the early days of Covid, I placed a blanket on our front porch and asked my two eight- year- olds to join me for forest bathing. They were perplexed. This is boring. Can I bring my iPad? When does the bath part start?  It reminded me of a time years ago when a friend in Austin sent me some Reiki to help with my neck pain. A few weeks later, I called her: “Did you ever send that Reiki you were talking about? I haven’t gotten anything in the mail.”

In August, my husband and I rented an RV and took our two kids on a four- hour drive north to Santa Cruz to stare at something other than screens. The kids loved the RV, but I advise parents to skip this house on wheels set-up. There is a kitchen and, with that comes a constant expectation of food preparation. The sleeping quarters are akin to folding yourself into half or thirds origami-style, so you might fit into a suitcase or the trunk of a Toyota Corolla. As we walked among the old-growth coast redwoods, I felt humbled and awed in the presence of these venerable elders. Coast redwoods are a deep rich auburn, and their bark resembles fur. They are impossibly soft like a fuzzy sweater or an animal’s downy coat. I said to my kids, “You know, the next time we come up here, these trees could be gone.” My daughter looked up at me and said, “Can I look at your phone?” Less than a week later, one of California’s massive wildfires swept through Big Basin Redwood State Park and threatened some of the trees, which are among the tallest on earth. Luckily most of them survived, but how much longer can these ancient trees withstand the devastation of these annual fires when 2020 saw over 4 million acres burned? And how much longer can I?

I worship California. Despite the crushing traffic, the constant threat of “the big one,” and years-long droughts, she has been my purest and most enduring love. I’ve never, in nearly two decades in my adopted state, thought, “Gee, I wonder what it would be like to live in “FILL IN THE BLANK.” Never once have my eyes wandered from her blooming jacaranda and palm-lined sunsets.

That is, until last year, after our third time nervously eyeing Twitter updates on the latest giant fire’s progress. All the while, thick yellow smoke obscuring our mountain view, our car nose- out in the driveway, go-bags packed. We’ve never had to evacuate, but we’ve had more close calls than I’m comfortable with- my comfort level on close calls with evacuation orders being zero close calls. Many nights, struggling to sleep, I’ve turned to my husband and asked, “Are we doing this wrong? I feel like we might be doing this wrong.” This year, the wildfire season and the pandemic brought a double quarantine. We couldn’t go outside because the air was at toxic levels, and the entire state was in the same predicament. Oregon, which I’d always considered my backup state- aka California Two- had it even worse. Climate scientists predict a growing number of autumn days with extreme fire weather over the next 80 years. Am I on board for keeping my children inside days and weeks at a time because of toxic air? Or scarier scenarios I’ll imagine tonight at 2 am when everyone else is sleeping?

I’ve noticed I have friends in two camps. The ones who don’t want to face this. I see their eyes gloss over or a slight tensing of their jaw. Why is she talking about this? I imagine them thinking. I don’t want to worry about this right now! I am worried enough about Zoom school and my marriage and Covid, and it’s not fair of her to bring up this climate catastrophe crap when I just want to drink my rosé and talk about how hot Adam Driver is! Yes, I am the bummer Zoom hang; I am a surprise screening of the documentary Blackfish when you thought you were going to Sea World. Then there are the other parents who are putting their houses on the market, reconsidering moving back to the states where their parents live, trying to convince themselves how hip Toledo is now.

I’m researching Vermont lately and Maplewood, New Jersey. I’ve never been to either place. Vermont because I suspect it might be the second most beautiful place in the United States and Maplewood because my friend Jen is moving there with her family, and she says it’s “the new Brooklyn.” I already don’t want to leave California, so New Jersey is a hard sell. Leaving California feels like breaking up with my boyfriend for him because he doesn’t have the guts. “California, I hate that you are making me do this,” I’ll say through my snot and tears. California, head hung low, like a dog that just peed on the rug, will reply, “I know, I’m the jerk. You’re great.”

I realize how lucky I am that I can worry over this. I’m not standing in line at a food bank, worrying about how I will feed my kids. I’m not forced to put myself and my family at risk as an essential worker. My family is safe, so far.

The night Pennsylvania was called for Biden, a heavy downpour drenched our region. The next morning, shrouded in a comforting fog, I pored over the news on my phone. Maybe the fire season was finally over. I threw on a warm coat and returned to my ancient forest, with an eight-year-old in tow. As we entered, we pulled down our masks, but the familiar smell I longed for was gone. Instead, crisp cold winter invaded my senses. I could see my breath. I pulled my daughter’s hood over her head. She promptly pulled it down, because don’t you try and tell her what to do. I placed my hand on the first redwood we encountered in greeting. My daughter joined me. I asked her what she thought. “Feels like a puppy.”

We found a bench, and she opened her notebook and began sketching. Mine remained tucked away in my backpack. I allowed my thoughts to float freely with the wind rustling through the treetops. I was bathing in the forest just as Qing Li advised. I focused on my eight-year old’s sun-lit copper tangles as she huddled over her aquamarine flip sequin notebook. A shift had occurred, and it was beyond the temperature change. The forest felt more settled, more secure. On a rational level, I knew that none of the West coast’s forests are any safer in the coming fire season than the last five seasons. But a tiny voice inside me looked upon my ancient forest and thought, you are protected. I had the sudden urge to throw myself on the soft earth and sob in relief because it no longer felt like the fate of this forest- all the forests, all the people suffering, my own children’s safety, and my own mental health- was all on me.

“Look, Mama, I drew a redwood.” A giant tree took up the entire page. At the bottom, two tiny stick figures spread their skinny arms wide on the redwood’s massive trunk.

Kristine Kimmel is a Los Angeles based writer with multiple television credits. She has an MFA from Antioch University and a memoir currently out on submission. Her work has been featured in Dame, Mommyish, Motherlode, The Establishment, and more.