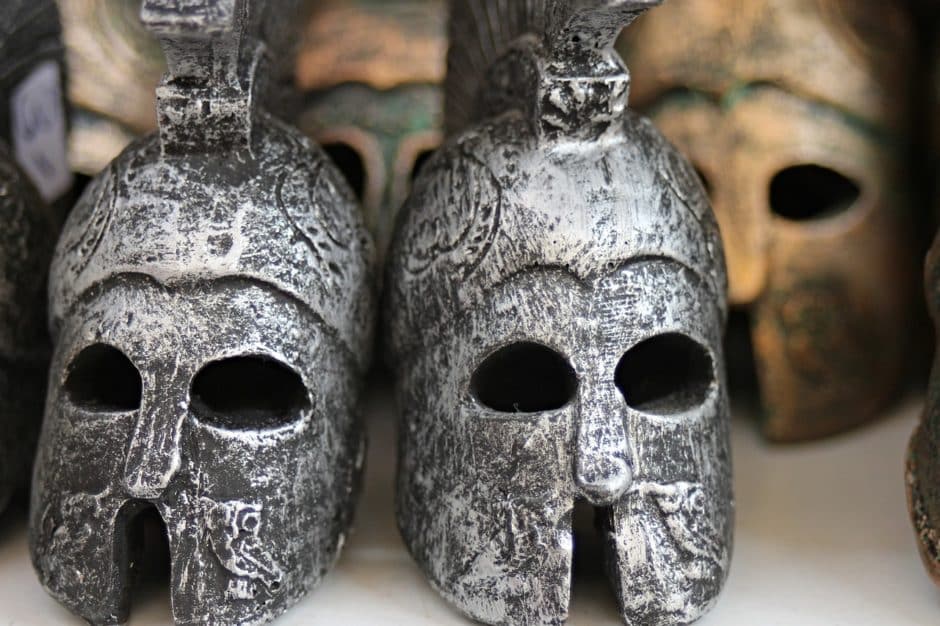 At age 19 I fell in love forever, with Odysseus, with Yiannis, and most of all with Constantine.

My mother had said college would be a happier place than high school for me, a bookish would-be poet marooned in small-town Long Island, dreaming of a life of the mind. What better place to find it than Princeton University, the pinnacle of the Ivy League and my father’s beloved alma mater? But when I arrived in September 1988, the intellectual paradise I had naively expected shimmered out of reach. I was wait-listed for creative writing workshops. I floundered in philosophy classes I took instead. I drank cheap beer, discovering a drunken hookup culture my mother didn’t know had replaced dating. I was so unhappy, I nearly dropped out.

My parents wanted me to stay. So I did, enrolling sophomore year in a comparative literature class with an appealingly weighty title: Myth, History, and Contemporary Experience in Modern Greek, English, and American Poetry. On the first day, a dozen students crowded around a long table headed by an avuncular professor who opened a book and immediately began lecturing, engrossed in the text.

I can’t recall exactly which poem he read. I like to think it was Cavafy, encouraging Odysseus to keep his beloved lost homeland of Ithaka always in mind, without fearing the monsters or angry gods he might find along the way. “You won’t encounter them / unless you bring them along inside your soul, / unless your soul sets them up in front of you.” The poems we discussed that day, and Professor Edmund Keeley’s unassuming love for them, captivated me. I bought Keeley’s collection of translations, “Voices of Modern Greece”, a slim paperback with a plain cover that gave no hint the verse it contained would crack my life wide open. My passion for these poets—Constantine Cavafy, Yiannis Ritsos, and Odysseus Elytis—would send me on an odyssey thousands of miles from home, leading to a new language, a new home, love, betrayal, loss, and heartbreak. I didn’t know it then, but my personal epic journey began in that classroom with a few lines of Modern Greek poetry.

Both scholarship student and Princeton legacy, I was navigating an uneasy mixture of struggle and privilege. My father had graduated in 1958, but he still bore childhood scars of poverty and loss. I grew up watching him hoard 32-ounce cans of imported Italian plum tomatoes so he would always be able to make sauce, and hearing stories of how he and his five siblings cared for each other after their mother died and their father abandoned them.

I had no interest in my grandfather’s language, Italian, or in German, the language of my grandmother, whose death remained an ever-present tragedy. Greece had always fascinated me, and in Keeley’s class, Modern Greek poetry began to take shape as an appealing island I could explore on my own, apart from my family.

I was in awe of any person with the exalted title “professor”, but Keeley was friendly and supportive, introducing me to Dimitri Gondicas, the Assistant Director of the Program in Hellenic Studies. When I decided to write my junior paper on Cavafy, Gondicas arranged for philosophy professor Alexander Nehamas to advise me. Some of my happiest Princeton memories are of meeting with Nehamas in his office at 1879 Hall to discuss Cavafy. For years afterwards (until it was lost in a move), I kept Nehamas’ translation of my favorite Cavafy poem, “I’ve Brought to Art”, above my desk.

My work with Nehamas showed me the limits of writing about poetry in translation. Gondicas suggested I study Greek in Athens, offering me a scholarship.

I told my mother first. As a teenager, she had wanted to be a flight attendant, and still dreamt of traveling the world. We decided to tell my father I’d won a prestigious scholarship. Only after he congratulated me, glowing with pride, did we mention my trip to Greece.

At last I was sailing closer to a life of the mind (something I had not even tried to define, or realized I could create). A childhood friend traveled with me, and we skylarked around Paros with two handsome brothers from the UK. Then my friends returned home, leaving me in Athens, alone. I had never been farther from home than New Jersey. Athens seemed too intense: loud, hot, bright, and utterly baffling. I knew no one, and the other students in my Greek class were already a tight-knit group from the same American university.

The language I had longed to learn seemed nearly impossible, too. I remember sitting in my apartment, struggling to sound out a new vocabulary word. Greek is notorious for complex multisyllabic words, but I wasn’t going to give up until I got this one. “Soo-ppp, soo-ppp-eh,” I intoned. “Soo ppp eh, rm, ar, ket.” Supermarket. I had just spent ten minutes deciphering an English word in Greek. I gave up and went to buy canned tomatoes for the marinara sauce I was cooking, gesturing to the shopkeeper to make myself understood.

The next day after class I spotted a guy in a Princeton T-shirt, and tapped him on the shoulder. Photis invited me to lunch. He and his father, a Greek-American professor, were so friendly, I forgot to be shy of the man with the exalted title, and his handsome son. I was headed back to Princeton in two weeks, while Photis was spending a year in Greece. Both of us were surprised by how quickly our attraction deepened into love.

No matter that he lived in Athens. It was thrilling to long for him, back in Princeton. It was thrilling to walk to the copy shop late at night and receive a page of curling paper, fresh from the fax machine, containing a love letter he’d just written, 3,000 miles away. No matter that I now associated the language of Constantine, Odysseus, and Yiannis, my trio of perfect poets, with the flesh-and-blood Photis. Our love had survived my return to America, and was strong enough to lure him back for the spring semester.

After I graduated, we spent the summer in Greece. This time he was returning to Princeton, while I stayed in Athens for a year, teaching English and studying Greek so I could finally read Cavafy. Confident in our relationship, Photis suggested we see other people while apart. I didn’t like the idea, but I agreed. What difference would a meaningless fling make?

In November, I met a young Athenian. A professional-studies student and an aspiring composer, he struggled, as I did, to balance duty with creative dreams. Unlike Photis, my Athenian loved Modern Greek poetry, too; the first present he gave me was a copy in Greek of Elytis’ “Diary of an Invisible April”. And so once again I embarked on a romance that could not last. My Athenian was preparing for two years of mandatory service in the Greek Army, while Photis planned to join me in Greece after exams.

By the time my parents visited Athens that spring, I had astonished myself and everyone else by breaking up with Photis. My father had tolerated him, just barely, deriding our transatlantic passion as “puppy love”. In Athens, my parents smiled through a dinner with me and my new love, but I knew they feared losing me to Greece. I was happy with my Athenian, but I hated that I had hurt Photis, and I wondered, if I could abandon him, what other betrayals was I capable of?

That spring, I forgot about Yiannis, Odysseus, and Constantine. I squandered the opportunity to read Cavafy with my undergraduate Greek professor, Richard Burgi, who had retired to Athens. My Athenian’s knowledge of my native language was so much better than mine of his that we rarely spoke Greek to each other, and I did not complete the few translations I started of the poems he’d given me. Shutting out my guilt about Photis and anxieties about the future, I lived in a desperate but exalted present tense. My Athenian would soon be joining the army. My job, and the on-campus housing that came with it, was ending, and so was my time in Greece.

I had no plans for what came next. It did not even occur to me to request another deferral on my student loans, or try to find a new job, so I could stay. I had been away for an entire year, enjoying myself, perhaps too much. It was time to go home.

America had become a foreign country. New York felt unreal, a temporary detour until I could sort out a scholarship for graduate school in England or Greece. I found a job and started repaying my Princeton loans, while my Athenian coped with army life. We had no money for traveling, so long-distance landline calls and hand-written letters sustained us. During our separation, my relationship to the language I had started learning so I could read Modern Greek poetry deepened and changed. It took on the tenor of his voice on my answering machine, the sweet silliness of the pet name we created from one of my funnier grammatical errors. The shaky alpha, beta, gammas from my copybooks the summer I met Photis solidified into the shape my Athenian gave the Greek alphabet when he wrote to me from the army camp.

Over time, the stress and unhappiness on both sides grew too great, and in early 1995, we admitted defeat. Single again for the first time in three years, I discovered that I could not reestablish a purely academic connection to the language of my love for these two men. I quit my

Greek lessons and abandoned my comp-lit career plans. I felt I had failed myself and my mentors. I couldn’t even admit why. Modern Greek had become a lexicon of heartbreak, and I had to leave it behind me.

The man I married is the kindest person I know. Understanding my desire to study Greek in a new way, he found an app for me last fall, and since then I’ve been practicing Greek almost every day. Just this week I’ve been able, for the first time in years, to read a few lines of Cavafy. I’m also discovering, in English and the original Greek, new voices collected in the bilingual anthology “Austerity Measures” published in 2016.

“As you set out for Ithaka, hope your road is a long one, full of adventure, full of discovery,” Cavafy wrote. “Keep Ithaka always in your mind. / Arriving there is what you are destined for. / But do not hurry the journey at all. / Better if it lasts for years, / so you’re old by the time you reach the island, / wealthy with all you’ve gained on the way.”

I won’t have the Modern Greek Studies career I once envisioned, earning the exalted title of professor of comparative literature for myself. I’ll never know what my life would have been like if I had stayed in Greece. But I’ve returned at last to the Modern Greek poets I once loved for their beautiful, dangerous, passionate words. They will always be with me.

Catherine Curan is a fiction writer, independent journalist, and writing teacher based in New York City. Her short stories have appeared in Arts & Letters, Fiction, Many Mountains Moving, Ozone Park Journal, and the SalonZine. In 2011, she won a Freelance Fellowship from Investigative Reporters and Editors, Inc. for a three-month investigation into residential foreclosures in the New York City area, which was published by the New York Post.