In remarks he made last Friday in response to the George Zimmerman verdict in Florida, President Obama asked to us all to “do some soul-searching…be a little bit more honest,”  and ask of ourselves “am I wringing as much bias out of myself as I can? Am I judging people as much as I can, based on not the color of their skin, but the content of their character?”

I was picnicing with friends at a concert in the park when I noticed a black man with a beautifully sculpted physique. As I admired him, I caught myself thinking “he must be a professional athlete”. I say “caught myself” because I recognized the thought was a stereotype and knew that had the man been white, I probably would have thought something more along the lines of “he must work out a lot.”

When George Zimmerman saw a black boy wearing a hoodie walking through a neighborhood that had experienced a spate of break-ins, he thought to himself “he must be a criminal”. Unfortunately, for Trayvon Martin, Zimmerman did not catch himself.

Because most stereotypes have a kernel of truth to them, they can be useful shortcuts for making sense of the world around us. But as anyone who has ever spent time cooking knows, shortcuts can sometimes lead to disastrous outcomes.

Prior to my parents adopting me, they adopted Rebecca, who they discovered–weeks after bringing her home from the hospital–was half black. For years I’ve wondered how my father and our family minister could have argued for returning Rebecca to the adoption agency and how my mother could have capitulated.

All these years later, I’m beginning to understand. It’s bad enough that people stereotype an adoptee; it would have been even more difficult to have been the brother, mother or father of a half black child in an all white suburb of Chicago in 1961. I see now my father was not just being callous. He was also being realistic, trying to protect us from prejudice that would have surely come our way.

We’re still struggling with the issue of racism in this country, and many of us still can’t assimilate a biracial family into our world view as evidenced by a recent Cheerios television ad depicting just such a family and causing so much invective on Cheerios’ YouTube channel that the comments section had to be turned off.

Directly on the heels of the Cheerios ruckus came news of a man in Virginia who was questioned by police for allegedly kidnapping children from a Walmart. The children were biracial. Turned out the children were also his.

These types of incidents are what my father feared would be directed at his family. His antennae were no doubt much more sensitively attuned to the potential for the destructive impact of prejudice having lost nine of ten aunts and uncles in the Holocaust. He learned the hard way that common sense and goodness do not always prevail over hatred and evil.

Stung by the loss of Rebecca and seeking redemption for her complicity, my mother became active in the Civil Rights movement. She made headlines in Deerfield, IL leading picket lines at a de facto segregated housing development, and later marched in Selma, AL alongside Martin Luther King. Until now, I’d scored her as the winner, and the brave one in the family’s drama. And she was brave indeed.  I saw my father as the loser in this exchange and the coward.  Maybe I was wrong.

Now that I have the wisdom to understand the complexities of the situation, I ask myself what if my parents had kept Rebecca rather than returning her to be placed in another home. For starters, my older brothers probably would have been teased and called names. My mother would have been the recipient of scornful sideways glances in the grocery store. Rebecca would likely have been shunned and bullied and possibly accosted by a neighborhood watch patroller. My father would possibly have lost business, and certainly face, in his community.

As a parent myself, I “get” why my father didn’t want to serve as a civil liberties test case that early in the game.  It would have been a rough uphill battle even today let alone then. I also “get” why my mother lost something of herself when she lost Rebecca, and why she went looking for it as a Freedom Rider.

I’m saddened that as a society we’ve not come farther in the past half century. That we are still jumping to conclusions about others based on the color of their skin. I’m ashamed to admit I still occasionally catch myself resorting to coarse stereotypes as shortcuts in my own life. My hope is that the Trayvon Martin case will teach us all to pay closer attention to our own reflexive assumptions about others and begin to take the high road even if it’s not the shortest route. 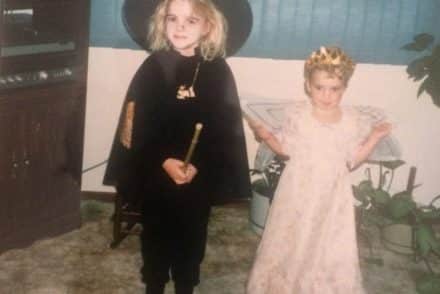 This Podcast Will Change Your Life.

The Art Of Doing Nothing. By Mirela Gegprifti