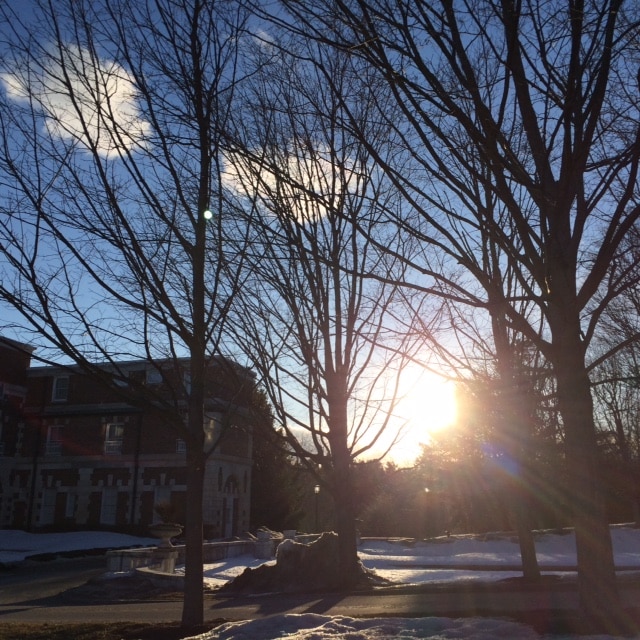 My brother and I retreat through the vestibule of the funeral home. I pick my way through four inches of uncleared snow in the parking lot, navigating in my oh-so-appropriate black stiletto knee-high boots, and climb back into the cab of his pick-up.  I slam the door as he starts the engine, and reach for the pack of cigarettes we had bought for the occasion on the dash. “Where’s the fucking lighter?” Jeff fishes through his coat pocket, pulls out an AC/DC lighter, and passes it over as the heater in the truck comes to life.

“Lager’s.  Now.” A divey bar with peanut shells on the floor, orange vinyl booths, and wagon-wheel light fixtures. A decor mode not uncommon in that part of the world. Perfectly appropriate to a day such as this.

There is a man at the window of the pick up. He is wedged between the window and the side mirrors which extend far out in this monster of a truck.

I look to Jeff. “Oh shit. Are you kidding me?” I hit the automatic button to roll down the window, against my better judgment, although ignoring him and leaving the parking lot would have resulted in taking this poor guy out with the side mirrors.

“Are you coming to the memorial service?”

“Can we talk for a moment?”

“I don’t believe there is anything to talk about.”

“And you are?” He leans further into my window. I move the cigarette to my left hand, trying to keep the smoke out of his face, and let it burn.

“I’m Jeff. That asshole in there was my step-father.”

In Pastor Dave’s defense, he took both the swearing and the apparently unexpected crack at the decedent quite well. His plastered-on “I’m so sorry for your loss” expression, one I imagine he wears on a nearly constant basis, barely cracked. “Well, the service is at six. You’re welcome to return.” Pastor Dave has apparently not thought through the traditional part of the service where the loved ones of the dearly departed share memories. Pastor Dave can officially be deemed an idiot, in my opinion, at this point.

Jeff says, “Yeah, well, we will see,” and makes a gesture (a milder one than I originally anticipated when he raised his right hand) to indicate Dave should take a step back as he revs the diesel engine. The pastor obliges. The ash from my burning cigarette hits the seat.

We drive to Lager’s. Jeff hasn’t had a drink in at least fifteen years, but is happy to enable me. The options are Bud, Bud Light, Coors, or Coors Light. I tell the bartender who has held residence there for longer than I’ve been alive to just pick one. I don’t care. No, the big stein. Jeff orders an O’Douls (which they miraculously have.) We sit in the dark bar, alone with the exception of the bartender, side by side.

“Do you want to go out for supper?

“My friends are coming to the memorial service.” Two girls from high school who in a true test of childhood friendships are willingly putting themselves in this line of fire. “We were going to go out after that.”

“Okay,” as he takes another sip. I notice the stein I’m drinking from is cracked. I look at the lights above the mirrored bar through the crack, rotating the huge stein to manipulate the lights. Suddenly I find it so unbelievably apropos, that I lose it. Laughter takes over. The kind of laughter where you can’t breathe, can’t talk, can only hyperventilate with tears running down your face, and point. Without knowing why, Jeff starts laughing. The contagion of my own outburst mixed with the total absurdity of the day, thus far, wins.

We finally recover and I announce, “Let’s go meet them.” It’s about a quarter to six.

“Jules. You’ve lost your damn mind. You do not want to go back there. I mean, I kinda do because this is going to be a shit show, but…” He trails off, takes another sip of his fake beer, and cracks another peanut shell open.

He throws a ten dollar bill on the bar.

We park in the exact same spot. I have texted one of the girls, they are inside, in the last row on the left. It is reported back there are maybe fifteen people inside. Everyone is already seated, primarily up in the front two rows on the right. Jeff and I sneak in, as much as my sore thumb outfit and an over 6 foot tall man can go anywhere undetected. I slide in next to Kristi, stashing my bag under the seat in front of me. I briefly wonder where the seat belts are, if the pew acts as a flotation device in the event of a water landing, and then shake it off.

There’s a hand on my shoulder. “Julie? I thought that was you. Don. Don Cassels?” I know your last name.

Yeah, I bet.  I turn back around, whispering to Kristi that this has in fact been a bad idea as the service begins.

The service unfolds in the usual manner. A prayer, a song that I know my father in fact hated, a reading, and a short sermon by Pastor Dave who is eying Jeff and I. The magic moment has arrived… The “memory sharing” portion of the festivities. I feel Kristi tense on my right. A few people get up and speak. People I had never known my father to acknowledge while he was alive. People, it becomes increasingly clear, who have no idea who or what the old man at the front of the room was about. There are no stories to share. None of them knew him or spent any time with him. Jeff and I exchange looks.

A tale is told of Gene and his grandchildren. I look to Jeff with a “WHO?” in an unintentional stage-whisper. He hadn’t seen any of his grandchildren in fifteen years. This service has now turned into complete fiction. I’m not sure who is more delusional, my now-dead father or the people who are telling these stories. Do they believe this? They can’t.

“Anyone else?” Pastor Dave says from the pulpit? You can feel the tension in the room. I take a deep breath.

I grab my bag from underneath my feet, elbow Jeff on my left, and leave. I head out for the parking lot, standing in the zero degree weather behind his truck. Jeff follows me out. “Who the fuck are those people? Who are they even talking about? Grandchildren? No one has allowed him to see a child in a decade or more. Even if he had wanted to. Which he didn’t. And he never ate chicken? What the fuck kind of story is that for a funeral? Besides being blatantly untrue, but that’s the story? God. Thank you for sharing. Jesus.”

The service has ended. I was told later that it was not my exit that ended it, but I’m unsure if that is true. Regardless, people are now standing just inside the doors, gathering their coats.

A woman who looks vaguely familiar steps through the doors and approaches, arms wrapped around herself. “Julie, we didn’t get a chance to talk.”

I’m not actually sure which of my cousins this is. I had seen them maybe three or four times growing up and not since my uncle’s funeral when I was sixteen.  “I’m sorry, but there is nothing to talk about. There never has been and there never will be. I’m sorry, but I don’t even know what your name is. So if you will excuse me, I’m leaving and no, I won’t be back, so y’all can go about your flights of fancy about dear old Uncle Gene unimpeded by any of this annoying ‘truth’ that everyone is so petrified I will tell.”

She begins arguing with me. It is zero degrees, pitch black but for the lights reflecting off the snow, I’m standing in the parking lot of a funeral home, and some cousin is arguing with me about what a stellar guy my father was. Jeff steps in and tells her to back off, we are leaving.

“You were always part of this family!” she yells.

I turn back, stop in place, and lock her gaze. “That’s bullshit and you know it.”

In the four years since his death, since being chased down in the parking lot of a funeral home by a pastor, since being confronted by some still unknown cousin, I’ve learned more about my father, and therefore, myself, than I ever could have during his life.

I now understand that silence is a weapon. An exceptionally violent one. Silence is not passive as I once believed, it is incredibly active. And incredibly difficult to maintain.

I now understand that some things are unknowable. And that not knowing, while it may not be the choice we would make for ourselves, is often for the best. I don’t know what made my father become the way he was. I never will. His story may be one of horrors inflicted upon him as a child, about the early death of his own father, about being thrust into the role of “Man of the House” in the early years of the Depression, far before he was ready. Or his story may not be a sympathetic one. It may be unremarkable. It may be that this is just who he was.

I think often of the final lines of “Smoke Signals.”

What is left? Those words used to haunt me, much as he did.

What is left is a new understanding. Of him. Of myself. Of our strengths, our weaknesses and our many, many faults, individually and collectively.

What is left is a new understanding of forgiveness. Of him. Of myself.

What is left is an incredible freedom when it happens. In spite of him. But primarily, in spite of myself.

Julia Cassels is a quasi-recovering attorney with an immigration practice in Southern California, as well as a writer, yoga addict, and general bad-ass. Her personal essays are published on www.nonsensicallynonsense.com and she can be found on Twitter @julia_b_cassels. She has previously been published on The Manifest-Station.

Princeton! The Manifestation Workshop in Princeton, NJ April 11! Only requirement: be a human being. Have a heart. Bring a journal. 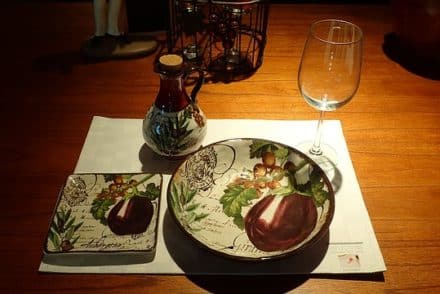 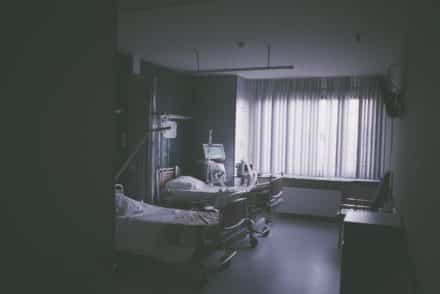 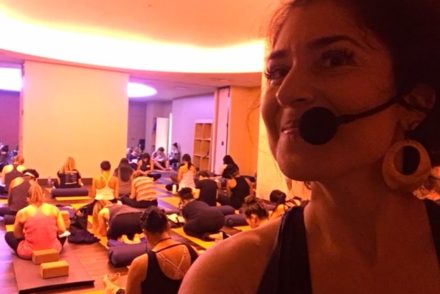