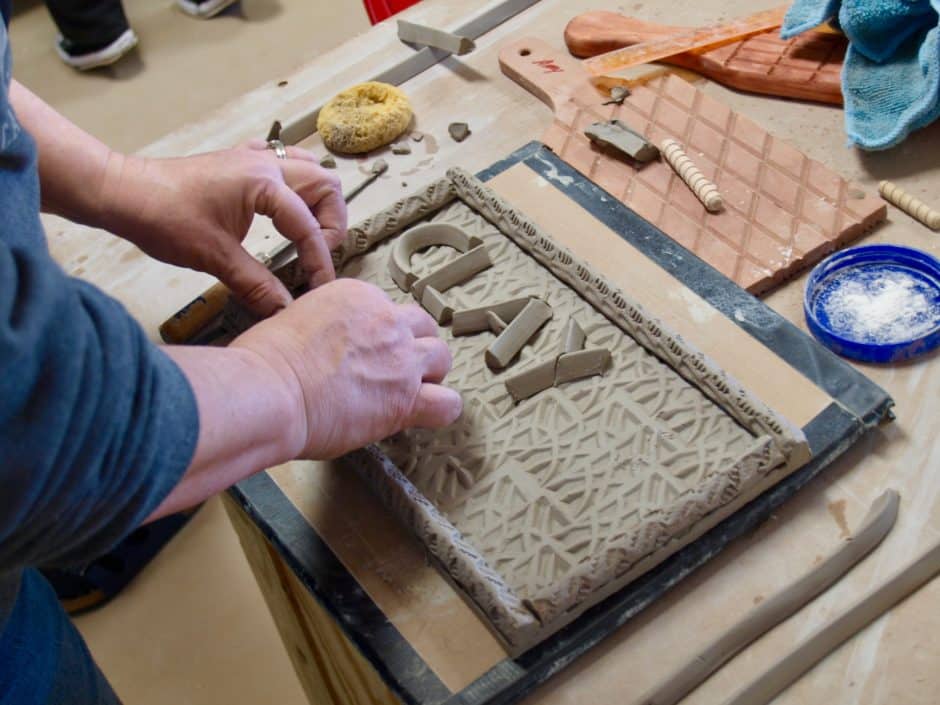 When the halls cleared out, I went into the art room and let my backpack slide off my shoulder onto the floor. Mr. Evans nodded quietly to acknowledge me, but he focused on whatever was on his computer screen. I turned the combo on my locker and glanced at the clock. Robbie would be here any minute, so I used both hands to heft the plastic-wrapped block of clay out of its cubby and onto the table. For my last assignment—vase making—I’d made one only half as tall as my classmates’ so I could conserve my clay.

“It’s for wildflowers,” I’d told them when they smirked.

Now I had a good-sized chunk left over to give to Robbie. “Hey!” Robbie yelled at top nine-year-old volume when he came into the room. I startled, and he laughed dramatically. I couldn’t help but smile.

Robbie and I had had a rough start. I’d signed up for the Buddy Program because I’d always wanted a younger sister. Visions of teaching jump-rope songs to a little girl had flooded my imagination. Then came time for the first Buddy Program session. The elementary school counselor who had facilitated the high-schooler and elementary-schooler pairings handed me a slip of paper, where I saw his name: Robbie. A boy. There was no time to brood on it, though—I could already hear kids’ shuffles and giggles coming toward us in the multipurpose room. While the other kids ran to their high school buddies, slapped high-fives, and laughed, Robbie slumped into a chair next to me.

“Hi, I’m Ali.” I was not good at making awkward situations more comfortable. Robbie’s eyes glassed over, and he whispered, “Hi.”Before long, I learned that his grandpa, who’d been living with him and his mom, had died the night before. I felt paralyzed. My “I’m sorry” sounded empty, and it seemed so unfair that we were sitting in a room full of raucous children and teens scribbling colorful answers on their Getting to Know You worksheets. Robbie and I spent that first hour-long meet-up mostly silent. I didn’t know if he’d show up the next week, but he did. And the week after that. I never figured out how to talk about his grief, but just being there with him seemed to help.

Before long, his teacher asked me to come by on Tuesday afternoons to help tutor Robbie on telling time and counting money. Two years later, we were still meeting weekly with the whole Buddy Program and an extra day one-on-one doing some other activity—tutoring if he needed it; art if he was caught up. I took a deep breath as I thought about the transition over the years but turned my focus to prepping the clay for him. The outer edges of the block had dried out a little, a result of the used and reused plastic bag that had accumulated tiny holes and let air seep in. With my finger and thumb, I pinched off the hard bits until a ball of soft clay remained.

“Hey,” I said to Robbie and held the ball in front of him, squeezing until it squished out through my fingers. “I’m strong, huh?”“Not as strong as me!” He reached for the clay and mimicked me.

Somewhere around the end of the first year, I gave Robbie a model house I’d built, and he gushed, “That’s so cool!” So we started building things together—mostly in the art room. At the end of each session, he’d take home his creation.

“You know that smiley face painting we did last time?” he asked me now as he dug one finger into the center of the clay wad. “Mmmhmmm,” I mumbled, rolling out coils from my less-pliable clay. “I used it for target practice with my mom’s boyfriend’s darts!” I laughed.

The first time he’d told me about his nearly immediate destruction of something we’d made together, I—as someone who had formed a sentimental bond with every object I’d ever owned, especially gifts—couldn’t hide my cringe. But for Robbie, things were no good collecting dust on a shelf. You had to make experiences with them! And so every week, we created, he destroyed, and then he told me the story. He grunted in frustration, and I stopped rolling coils to see why. He had formed a softball-sized glob and several smaller ones, one of which he was trying to press to the side of the big one.

“Oh, hey, there’s a trick for that.” I lay my coil down and held out my palm. “Can I show you?” When he handed me the small ball, I demonstrated scoring the soft clay with a sharp tool that left jagged cuts on one side of the little ball, then the big ball. “Then you have to make slip, which is a weird word, but it’s basically clay glue.” I tore off two inches of my coil and put it in a bowl with water. “Here, put your fingers in here and mush it around.”

Robbie’s cheeks tightened skeptically. I’d looked that way at my older brother nearly every day of my childhood, trying to gauge if he was tricking me. I’d never tricked Robbie, but obviously someone had.

“Really, come on.” I nodded and plunged my fingers in.“Ew, it’s slimy,” he yelled when he tried it. Mr. Evans looked up disapprovingly. “Shhhh. You know what else is slimy?” “What?” “Glue.” I winked as I dabbed some slip on my fingertip and then onto the scored clay and pressed the two balls together. “Tada!” I sang when they stuck. Robbie made what had become my favorite sound since I’d met him.

“Whooooooa!” From our first meeting, something had seemed familiar about Robbie. Did I see myself in him somehow? No, we were opposites in nearly every way. Rowdy/quiet, destructive/creative, easily bored/could sit in one activity for hours. But below those surface behaviors, there was something similar. Something broken. When I’d tutored Robbie, sometimes his body shook in tiny convulsions. “Are you okay?” I’d slide the flashcards to side of the desk and line my face up with his. Robbie would stare down, his eyes lost in the wood grains of the desktop, or someplace far beyond. But part of him was still with me. In a thin voice, he said, “Just cold.” I took off my fleece jacket and wrapped it around his shoulders.

“Should we take a little break and draw?” I used to say color instead of draw, but he finally informed me that only girls color—boys draw, and only in black. But maybe sometimes yellow or red. Before he answered, I pulled paper and a black marker out of my backpack. For about a year, Robbie drew only round yellow faces in a variety of expressions, shockingly similar to today’s emojis. Sometimes they smiled, but mostly they expressed pain or fear, and he laughed at his creations. I was sixteen, trained only in art and writing and basic math, never psychology. I never knew what it meant. I still don’t. But I knew that drawing stopped the trembles and brought his eyes up from the void, his smile back to his face.

So I gave him more paper, more pens, more time. Eventually trees and dogs with wagging tails and even flowers started to appear in his drawings too. And I knew that time with Robbie meant less time at home for me. I could delay getting into my rusty red pickup and shambling home to my father’s frigid trailer. Every moment with Robbie was a moment less with my father’s unpredictable rages or over-the-top professions of love and “Family is the most important thing. Don’t you ever forget that.” Robbie’s and my time together became a sort of glue that kept us both from fracturing.

We spent the rest of the hour gluing small clay shapes onto his clay softball. We left it in my locker to dry before he took it home the next week. The week after that, he told me it was the perfect size for launching from his catapult toy into the fields behind his house.

“I did it over and over until it broke into three pieces,” he said with a shrug.

“I guess we better make something else,” I said as I laid out Popsicle sticks, glue, and paint.

Robbie and I were buddies for three years, until I graduated high school and moved away. I have a single photo of us together. We’re at my graduation party, and he’s trying to stand up straight in my letterman’s jacket, weighed down by the running medals I sewed onto it. Our faces are round and red, laughing about something.I keep the photo in a pocket of the jacket, which collects dust in a closet, where I hope neither will ever be destroyed.

Ali J. Shaw has Rocky Mountain air in her blood, but she calls the Pacific Northwest home. Her nonfiction has been featured in r.k.v.r.y., Hippocampus Magazine, VoiceCatcher, and the Get Nervous reading series, and was a finalist for the Victoria A. Hudson Emerging Writer Prize. Ali is an editor who collects typewriters and rescue animals. 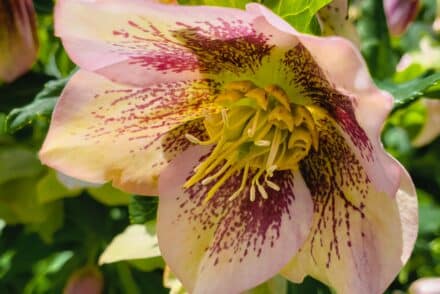 A Terrible Thing Has Happened 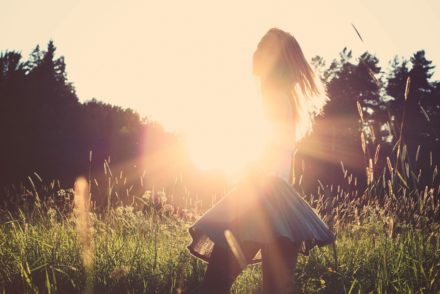 Lips of My Childhood 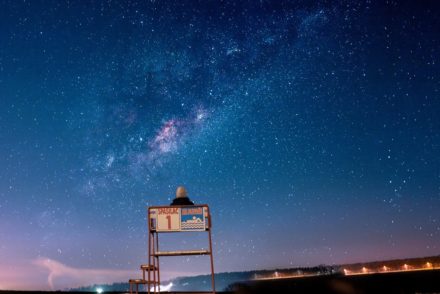