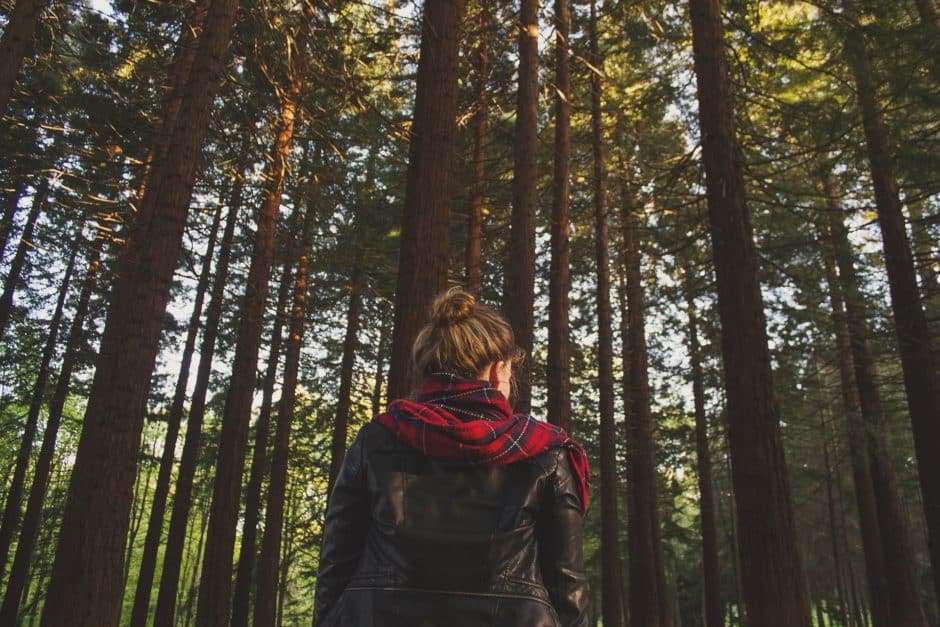 The frigid wind assaulted and fumbled me, rolling my shirt up over my pale stomach and pulling the crotch of my yoga pants down mid-thigh. I looked up at my chalked, bleeding fingertips digging into impossibly minute protrusions, and down at my toes crimping into barely perceptible fissures. My legs shivered and bounced from adrenaline. The sunny granite warmed my cheek as I flattened my torso and face against it. I took a deep breath in, letting it out slowly, repeating my mantra for the past year in my head: You’re okay. You’ve got this. Just keep moving. The bouncing slowed and stopped.

They say that divorce is like death, but from my experience, it’s really like a violent murder, with everyone trying to figure out whodunit. I’ve been playing a very old American murder ballad, “In the Pines,” over and over again, obsessing over its history, metaphor and haunting melody because the theme so strongly parallels my life over the past year.

In the song, depending on which artist covers it (pretty much everyone from Dolly Parton to Nirvana) the victim changes: the husband/father or the woman. In every version, the woman is always guilty and ashamed, even if she was the one murdered. It’s always her fault, somehow. She runs away to hide in the pines. Like the woman in the song, I had been metaphorically hiding for the past year in what can only be described as a dark, freezing pine forest. Being fully exposed on a sunlit, smooth rock, sixty feet in the air was essentially my coming out party.

In the song, the pines are interpreted in “The Haunting Power of ‘In The Pines’”  on Slate.com, as a “cold, dark wilderness” where “a person has left to be by themselves to face what they are and what they have done.” The chorus goes:

In the pines, in the pines
Where the sun never shines
I shiver when the cold winds blow

My journey through my divorce began in victimhood. A woman at a cocktail party, in a similar place, shared her story with me. She kept repeating the phrase “I had no choice,” like a chorus, and I kept murmuring back to her, “of course you didn’t,” like a refrain. Just like me, she “killed” her marriage. She felt compelled to confess to everyone who would listen, justifying herself in order to seek absolution in the court of public opinion. What I see now is that we were both ashamed, wanting to paint ourselves as victims, so we didn’t have to take responsibility for our choices. We didn’t want to kill our marriage, we told everyone who would listen. It was self-defense.

When I listen to Loretta Lynn’s “In the Pines,” it’s like an anthem of victimhood—the abused woman who still loves her man. In this song, the husband murders the wife and her spirit, betrayed and yearning, wanders the cold forest. She sings:

My love, my love
What have I done to make you treat me so?

Victims are just like ghosts—stuck between worlds. They can’t move on until they get some sort of closure. If I stayed that way, I would have eternally haunted those cold pines without resolution, never moving on or learning how to live my best life. I quickly got tired of hearing myself whine, at cocktail parties and everywhere else. It dawned on me that all along I had choices, because everyone does. I could’ve chosen to stay, but I chose to leave. It was my choice.

On the rock, I knew I had to keep going. I couldn’t hang suspended forever. I looked at my feet and calculated my next move. My right foot needed to get into a crevice 12-15 inches above my waist…I slipped, scraping my left elbow and leaving a trail of blood as I fought to hold on. Fuck! I screamed, irrationally angry at the rock. I wanted to destroy it before it destroyed me.

All of my anger at myself for playing the victim I turned right back onto my ex. I was angry and defensive. Whenever someone asked me to explain whodunit, (Gosh…What happened?!”) I would brazenly stare them down and say, “I chose to end it.” I made him the victim. A lot of people I loved turned against me, cutting me with their words, or worse, rejection. I took it. It wounded me deeply, but I didn’t show it. I bled internally. I was ashamed of myself for what I did to him. I completely isolated from anyone and everything. I didn’t need anyone.

This echoes The Louvin Brothers’ version of the song, where the husband-murder victim accuses the wife-murderer. In that one, they sing about how the husband gets hit by a train. They find his severed head in the engineer car, “behind the wheel,” but they never find his body. The wife, it’s implied, was the instrument of the husband’s gruesome death. She runs away to the pines in shame. He sings from the grave:

Little girl, little girl
What have I done that’s made you treat me so?

On the rock, as I slipped and started to panic, I remembered my belayer. I wasn’t alone. I had ninety pounds of fierceness below me, my tiny-yet-mighty-attorney-friend hanging onto my life by a very thin rope.

“You got this!” She yelled.

She caught me, taking up the slack and leaning back to brake. I swung over to a ledge and stood on it, looking up to where I had been, seeing the bloody marks left on the surface of the rock.

My friends and family called me out of the pines. They were my tether back to myself. I sought support from groups of people with similar experiences, therapy, yoga. Gradually, I began to arrive at an acceptance phase. The marriage had been long dead before my decision. I didn’t kill it, nor did he. All I did was call the time of death.

Like the woman in Nirvana’s cover of “In the Pines,” re-titled: “Where Did You Sleep Last Night,” I had been hiding in shame, but needed love and support to get out. This is my favorite version of this song, because the singer, Kurt Cobain, has so much kindness for the woman. He’s asking her where she’s been and what she’s going to do, and answers in her own voice, full of pain. The chorus:

My girl, my girl, don’t lie to me
Tell me, where did you sleep last night?

In the pines, in the pines,
where the sun don’t ever shine.
I would shiver the whole night through.

My girl, my girl where will you go?

I’m going where the cold wind blows.
I would shiver the whole night through.

Cobain is having a conversation with the woman, whom he lovingly calls “my girl.” He gently coaxes her to “tell me” the truth about where she’s been and where she’s going. None of the verses focus on the murder, only her shame and getting her to talk about it. If you watch the YouTube unplugged performance, there’s a moment of pure empathy in the song when Cobain sharply inhales and looks up, eyes open, full of hurt. Then he screams out the last mournful note.

I needed the people I loved to empathize with me, listen to me, and help me. I knew next to nothing about climbing. Even after losing those five feet and the skin on my elbow, I wouldn’t give up.

“Beta!” I shouted down to my belayer. This is how climbers ask for advice. A good belayer will never tell the climber where to put their hands or feet unless the she asks. A climber has to learn from her mistakes, or she’ll never get stronger or more experienced. That being said, no climber climbs alone.

“Look at your left knee,” she shouted. “Put your left foot in the hold where your knee is and push. Then you can reach up to that crack with your right hand.”

“It’s because you’re too close. Trust me!” She answered.

I trusted her. It was like magic. Somehow, my left foot found a solution that I couldn’t even see. I pushed and reached out, wedging my fingers into the fissure. From then on, I didn’t need any more beta. This new route was so much clearer than what I had been trying to do on my own.

I quickly made it to the top, thrilled and out of breath. When I got there, I yanked my pants up and my shirt down, then turned around and enjoyed the view. My belayer cheered, her voice going hoarse from whooping. No pines, just wide-open expanses bathed in orange desert sunlight as far as I could see. Smiling widely, I posed for a picture.

Destiny Irons is a digital content editor for a kick-ass, female-owned company whose entire goal is to save people money, called The Krazy Coupon Lady. She is also attending graduate school at Chapman University for an MFA in Creative Writing. Destiny lives in Southern California, where she enjoys hiking, backpacking and climbing with an amazing, strong, funny group of women who are her tribe. She has two teenagers, Jude and Ruby, and a good dog named Blackjack. Destiny chooses to be happy and grateful every single day. 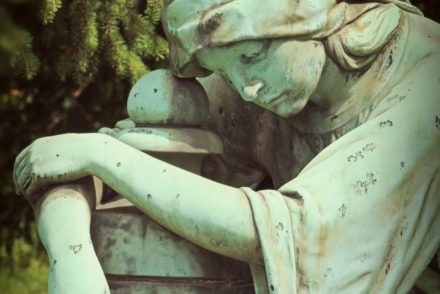 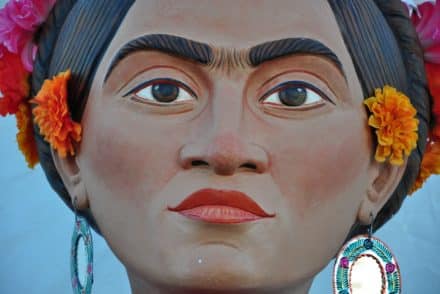 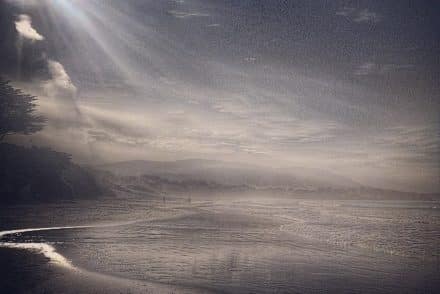 I Remember My Dad As Brutal, But It Was Far Worse