I Don’t Want To Be Skinny Anymore. By Amanda Broomell.

I want to be skinny. I want to walk into Lululemon and know that every see-through pant will slip onto my milky white skin like butter, without the fat. No more doughy rolls hanging over my gym shorts. No more bulging FUPA stuffed like a petrified fried egg inside my pinstriped work pants. I want to be the woman brazenly bearing her T&A in the Equinox women’s locker room. The sweaty hot chick getting stretched out on the sticky mats while beefcake dudes drool as they pass by. The skinniest chick in the room.

I know they tell you that being skinny doesn’t change anything. But I dream it does. And the dream is what I desperately cling to. Even as I write this, I’m fantasizing about all the squats I’m gonna do later to get J.Lo’s butt (let’s be real, there are not enough squats in the world to give me J.Lo’s butt).

I want to be SKIIIIIIIINNNNYYYYYY!!!

I don’t know how to BE skinny. It feels foreign, empty, unsustainable. Frankly, it’s just not me.

In 5th grade, I was over 90 pounds when everyone else was 70. I had a period and boobs when everyone else had cardboard chests. I grew up around a neighborhood of boys who called me fat on the daily. At school, I was entered into a “hotness” competition against Cindy Crawford as a joke. In 9th grade, a guy who actually had a CRUSH on me said I was built like a football player. You can imagine what that does to a young lady’s self esteem. (These days, the deciding factor in choosing a mate is whether I could break him or not.)

On top of that, from roughly age 8 to 10, I was sexually, mentally and emotionally abused by a boy who was my age, which was eternally scarring and confusing. He regularly demanded to look at and feel my boobs – and threatened to burn down my house or tell the school I was a slut if I didn’t comply – but he also thought I was an ugly fat lard. How does one make sense of that dichotomy.

After suffering through those traumatic elementary years, I was determined to join the legion of skinny girls as the elixir for my deepest wounds. I imagined a life of glamour, adoring boyfriends, and victorious Cindy Crawford competitions. And miraculously, I achieved what I considered “skinny” during 5 periods over the next 20 years, though each of those moments was abruptly followed by a disappointing journey back to FATLAND.

My first success was the summer before college during which I worked at a local classy movie theater and basically subsisted on chocolate malt balls and warm, mustard-dipped pretzel bites. Then the next year all my hair fell out. But, damn, was I a skinny bitch.

Next was my gain of the dreaded freshman 15, which was really more like the freshman 30. I accomplished this gain by eating 2 pints of Ben & Jerry’s Chunky Monkey ice cream every evening before bed, and every morning, the freshly-baked chocolate chip bread that my very sweet, Jersey-bred roommate would make for me. But after I graduated college, I started working about 80 hours a week at this sports bar in Brooklyn and was now subsisting on bread sticks, martinis and oxycontin. No room for food! Again, skinny bitch in effect (emphasis on the bitch).

Fast-forward a few years, I gained all the weight back, and also a little dignity, after discovering the Institute for Integrative Nutrition in 2005. I began to get my life on track. I stopped with the pills and excessive drinking, and began eating according to what my body wanted. At first, all it wanted was chocolate and wine and bread. But eventually I realized those were mixed messages being sent to my brain, the result of an emotional desolation that I’ve spent the last 33 years attempting to fill up. I started eating incredibly well and naturally lost weight. Somehow, though, I couldn’t keep it up. Eventually I got back up about 20 pounds and was right were I started. W.T.F.

Attending Columbia’s MFA Acting Program in 2006, I pretty much had no time to eat. We were in class and/or rehearsals for about 16 hours a day for 3 years straight, and the summers were spent either working at low-paying temp jobs, doing non-paid downtown theater in tiny, sweatshop-like blackboxes, or traveling to Europe with money I didn’t have (thank you to all the big banks for your irresponsibly generous lending policies, and, to myself, for the bliss of ignorance and naiveté.) Plus, Showcase (where you do a “pretty” parade around a stage for a bunch of agents and casting directors) was always on the horizon, and you HAD to be skinny for that. So, I hired a personal trainer and ate grass for about 6 months before it happened. And it worked. I got super skinny. But it didn’t do any good. I didn’t get an agent and then that sent me into a super tailspin. On top of that, I endured an endlessly painful breakup with my boyfriend (they tell you not to date people in your class for a REASON), so I went back to my old Chunky Monkey ways. No one wanted me anyway, so what was the point of looking good?

THEN, about three years after all of the post-apocalyptic grad school drama died down, I entered a bit of a health Renaissance. I started seeing a chiropractor and an acupuncturist (along with a psychic or two) and had the strong desire to take better care of myself. It was during this period I discovered I was gluten sensitive and decided to give up all gluten products. Well, let me tell you, I lost weight as quickly as a cop stops for donuts. I felt amazing, looked amazing and thought – THIS IS IT. I’ve made it! I’m finally skinny…for life! This was a lifestyle change, not a diet, so there’s no way I could go back to before.

WRONG. After two depressing breakups in 2013, I was cheating and eating Umami burgers WITH the brioche bun and a side (or two) of fried smushed potatoes. I was drinking bottles of wine, eating tons of fries and dessert (even though I tried to justify it by mostly eating gluten-free treats, they were still processed and full of fat), and suddenly, none of my size 4 work pants (that I was SO PROUD to have purchased since that was the smallest size I’d ever owned) fit anymore. How did this HAPPEN? I was so disappointed in and disgusted with myself. I messed up a year and a half of seriously hard work. What is my major malfunction?

In the scheme of it all, I was, at most, only ever 30 or 40 lbs over my skinny weight, so what’s the big deal? Others struggle with far worse than that. But it FELT whale-like. And also weirdly comforting. I felt protected. I had an excuse why I didn’t book an audition or get hit on at the ridiculous hipster bar. I could just hide and no one could see the dark recesses of my wounded self but me. I could hate myself in the peace and quiet of my own fat-insulated home.

The subconscious logic makes total sense: If I never get skinny, I don’t have to worry about getting fat again. And if I’m fat, no one will really notice me. They’ll just have pity or disgust, but they won’t ever see the deeper flaws. The irreversible, unlovable, ugly, scary flaws. The she-who-shall-not-be-named that lives within me. Fat is my invisibility cloak. It’s the only way I know how to be.

Fat = safe. Skinny = love. Love = fucking terrifying. Because once I’m skinny, I will be desired. I will be looked at and wanted. I will be seen, and the shame and disgust I feel will be broadcast to the world. There will be no hideaway. I will no longer be comfortably invisible. As much as I loathe myself as a fat person, I am horribly fearful of being a skinny person. Then there will be nothing between me and the broken girl beneath. I will be faced with confronting my true self, and that is the scariest truth of all.

As I write these words, I realize I’ve entered period 6 – I’m on the road to skinny! But this time, it feels different. I don’t have the same desire to eat until I burst. I DO, however, sometimes feel like there’s a Satanic voice in my head questioning whether I can sustain this for a lifetime or if the minute I get my heart broken or I don’t book that short film everything will just fall apart and I’ll gain all the weight back again and be a big fat blob that no one will ever have sex with ever again. SHUT YOUR TRAP, SATAN!

Bottom line is: I don’t want to be skinny anymore.

I want to feel good.

What would I have to give up to feel good, ALL the time? Basically my entire identity as I know it. Peel off my skin like the label on a wine bottle – have you ever tried to do this?!?!? It’s basically impossible.

So what’s the solution? Honestly, I have no flipping idea. All I can do – have been doing – is wake up every morning and make a decision about how I want to feel. I’d say 90% of the time, the answer is “good.” There’s still 10% of the time I feel like stuffing my face with 500 buttercream cupcakes. But compared to 10 years ago, that seems like playing a delicious, calorie-free game of Candyland. Everyday, I try to be grateful for what I have in this moment. I try to eat things that will make me feel good in this moment, in a nourishing way rather than an instant gratification way. I’m focusing on a new goal: I don’t ever want to be “skinny.” I just want to be a better version of myself today than I was yesterday. Become the kind of person I’d want to hang out with. FUPA and all.

Here’s my new mantra, inspired by the inimitable Jennifer Pastiloff:

Love yourself now, Amanda, because in 10 years you will marvel at how beautiful you once were. Savor it. NOW. You’ll wish you did.

Amanda Broomell is an East Coast girl with a West Coast heart – she grew up in Southern Jersey but always knew she was meant for Southern California. It’s only been a year, but she’s madly in love with this place. As an actor, holistic health counselor and marketer, it’s the perfect place to be. More at amandabroomell.com, realurbanwellness.com (coming soon) and @RealUrbnWellnss on Twitter and Instagram. 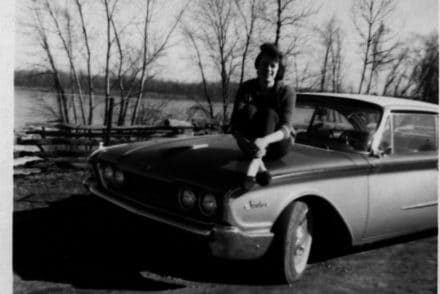 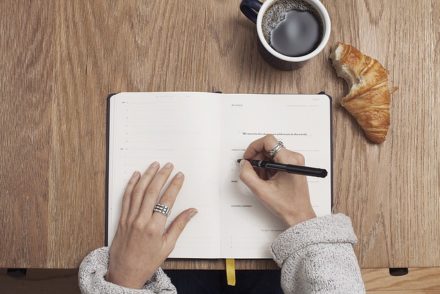 The Sound of Loss.