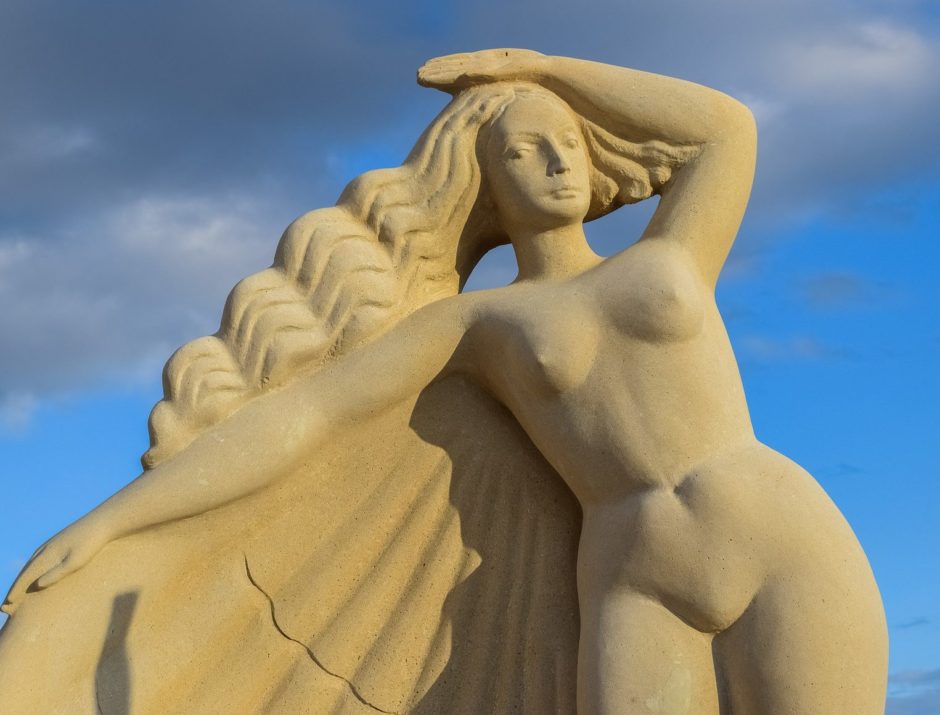 The bathroom was dark except for the light emitted by a pink votive candle. The air was heavy with rose incense and the warmth emanated from the bathtub. It was my second or third year practicing paganism, yet I was still struggling with accepting the existence of any deity —  spiritual doubt created by an abusive childhood. I squinted in the dimness and read the words of the ritual calling upon the goddess.

I don’t remember why I chose to call on Aphrodite that day. I believe I wanted to connect with the element of water and knew she was a goddess associated with it. So I whispered the words welcoming her into my bathroom. I stepped out of my clothes and into the water. I tried to relax and let it embrace me, but as always it was difficult to focus and my mind was racing. Am I doing this right? I felt silly calling into the darkness. My body was tense.

Admittedly, I was also hesitant to call on Aphrodite. My education included several courses on Greek literature. Older, male teachers had explained that Aphrodite was a shallow deity, absorbed with her own looks and driven mad with lust. What connection could possibly be made with such a deity?

Aphrodite spoke loudly and clearly to me that day and told me what she expected of me.

The first thing I learned was that Aphrodite is a goddess of surprises. She did not speak with the ditzy, flirtatious tone I feared. Her voice was strong, her words loud and clear. I did not understand everything she told me on that first day. But, she told me it was time to do deep shadow work regarding my father and his legacy of abuse. She guided me, and I told my father that he no longer had control over my mind or body.

I felt my energy building and crescendoing and I visualized myself creating a psychic boundary  my father could not penetrate. He could not keep me captive anymore.

I had worked with other deities before I made an offering to Aphrodite. After the bathtub meditation I continued with my regular routine. The meditation had been powerful, but power is often frightening for those of us who have lived without it for so long. Other deities demanded things I was capable of giving. Could I do what Aphrodite was asking me?

I continued to make offerings to other deities. I spent the summer trying (and failing) to learn basic beading so I could craft sacred jewelry for them. As I toiled away, my stomach started to churn and fill with guilt. Something was not right.

Colorful beads flickered in the fluorescent store lights. I eyed bright red sale stickers and slowly walked waiting for the right purple beads to show themselves to me. My eyes rested on a seasonal display of golden summer beads shaped like conch shells and sand dollars. I fingered some small pearls and my mind drifted to that night, the night of the bathtub meditation.

I began to list the traditional associations with Aphrodite: pearls, scallop shells, roses, doves. The churning in my stomach slowed to a stop.

While I understood that Aphrodite was making a request of me, I ignored the implications. I assumed Aphrodite wanted to receive the honors other gods I worked with did: daily offerings of candles, incense, and prayers. Badly made ritual jewelry that took painstaking hours to create.

Yet, I still refused to acknowledge what Aphrodite was trying to reveal to me — that I was a woman capable of knowing herself, accepting herself, and of loving herself. A woman who would manifest her desires and accept no less from herself, let alone others around her.

I was attracted to deities associated with darkness that many others feared. But it was Aphrodite, a goddess strongly associated with all things feminine and that scholars framed as weak that terrified me the most.

My father controlled everything about my life during my childhood and teenage years. On weekend visits to his home he would sift through the clothes I brang and determine what was or was not inappropriate. His eyes lingered over my body and what I wore. The clothing that made him stare the longest enraged him and was deemed unacceptable.

Teenage independence was a double-edged sword for me: the ability to leave my father’s home for a few hours was a respite. I barely knew how to function outside of his control but I groped through these early social interactions blindly, joyous to be away from him. But when I returned the lectures and the punishments for my excursions were unbearable. Once, he told me that I should be careful during these rendezvous — “ugly girls can get kidnapped and raped, too.”

I made it through these years by dissociating. I did not inhabit my body because it was no longer my own, it was an object that attracted disgust from all of those around me. I could not stand looking in the mirror and often left the house without doing so, donning frizzy hair, toothpaste stains around my mouth, and wrinkled, baggy clothing that hid my body. I did everything it took to hide from myself, from my own body.

As I navigated graduate school I gained weight and my thighs expanded, stretch marks rippling across them. The idea of looking at my own body naked was becoming more and more nauseating.

In reality, some myths stated that the marriage between Aphrodite and Hephaestus was forced upon her to stop male deities from fighting over her. Other myths stated Hephaestus tricked Hera and forced her to give him Aphrodite’s hand in marriage. Yet, male academics still found a way to twist these facts and blame Aphrodite for men’s uncontrollable, violent sexual desires.

Shame is inconceivable to Aphrodite. She is a goddess who knows her own body and what it desires. She owns her grounded reality. Because of this, Aphrodite easily rebels against the expectations forced upon her by others. She seeks sexual gratification elsewhere when she is not satisfied by the husband forced upon her. She has sex with gods or mortals. Aphrodite laughs in the faces of men– divine or mortal– who think they can tame her. She is wild and dances in the foam of the waves that lap the beach. She opens her eyes and sees herself clearly in the water. She runs her hands  through her long hair and over her body and smells and tastes her own saltiness. She grins as she thinks of the next man she will consume for her pleasure– the next man deemed holy enough to worship at her altar.

Darkness enveloped the beach. The full moon hung pregnant and heavy, the only light source on the empty beach. The only sound was the faint, steady lapping of the waves. I brought awareness to my body, brought my focus to my breath. I let myself relax, I let myself feel my belly and my thighs, skin and flesh I had feared for so long. I whispered prayers to my own body that transcended men’s values of attraction — I thanked my body for carrying me through this life. I let myself relax into it, and could not remember ever doing so before.

Aphrodite. Goddess of self-control. Goddess of our bodies and our sexualities. Goddess of confidence. A fierce warrior of self-love. A wild woman who defies stereotypes without even acknowledging them. A woman whose language does not include words for self-doubt or permission. Goddess hungry for vengeance against oppression. Goddess who demands that we create our own revolutions by finding ourselves and looking deeply into our reflections.

I stood at the edge of the waves and peeled off my socks. My body was electric and alive, grounded in the hard packing sand beneath my feet. The waves lapped over my ankles, soaking my jeans. The water was bitingly cold and the wind ripped through me. I stepped into the water and saw my pale face reflected back at me. No fear. Nothing except for my reflection, the water, and Aphrodite. Power.

Callie S. Blackstone is a lifelong New Englander. She is lucky enough to wake up to the smell of saltwater and the call of seagulls. Her creative nonfiction has been published in special interest magazine ‘SageWoman.’ Her poetry has been published in The Elephant Ladder. It is also forthcoming in an anthology titled ‘Tell Me More’ that is being published by East Jasmine Review.