Jen Pastiloff writes about her “undue shame” about her hearing loss. I also feel shame for my hearing loss, but I still feel like mine is due. Like it was my fault.

I overdosed on heroin, cocaine, and benzos on Valentine’s Day 2017. I was living in New York City and was not breathing, no pulse, when my boyfriend found me. I’d been ‘down’ for an unknown period of time when the paramedics arrived. I was 0-0-0 — unconscious, no breathing, no heart rate —  and it took them 20 minutes to restart my heart. My body had given up. It quit. I died.

They wouldn’t tell my dad if I was alive or dead when he called the hospital. He flew out from Boise, my mom from Hawaii, and my brother from LA to spend 3 weeks at my side, hoping, praying that when they removed the ventilator I would breathe again. On day four, a CCU surgeon told my parents that I had a 0.5% chance of surviving.

I woke up with this terrible ringing in my ears, and honestly, I was confused as to why everyone was beaming. I found out my lifestyle was over; I’d lived on my own since 18 and now at 24 I was to move back into my dad’s pink house on the corner? Not to mention learn to sit up, talk, and walk again. They called me the “miracle baby” – and I couldn’t grasp why everyone was celebrating. I felt ungrateful for my second chance at life. I flew back to Boise from New York two weeks later, now moving slowly and with a walker (which I proudly tossed when I saw my friends awaiting me at the gate in Boise).

Still, the ringing. I couldn’t hear what the doctors were telling me about my condition, the wound vac, compartment syndrome, medically induced coma, overdose… I felt unable to participate in conversations about my own body, my health. Conversations about my future, was I going to rehab? Was I a drug addict or was this just an experiment gone wrong? What about my career in journalism (or my server gig at Henry’s, I had been fired at this point from a PBS station in New York).

I saw an audiologist in April 2017 and learned that I had lost 70% of my hearing in both ears (actually, 73% in the left). They attributed this to the lack of oxygen arriving to the cilia in my ears — I’ve since come to think of this as flowers wilting, shriveling up, dying due to carelessness, lack of love and attention.

My first pair of hearing aids were over the ear. It was late May when I got them and despite the heat I refused to wear my hair up. I felt such shame about my hearing loss, and I still do.

Since then I’ve gotten a pair of in-the-ear aids. Only recently have I started to wear my hair up at work. Still, on first dates or when I know I will be hugging someone, I take them out. I don’t want that awkward buzzing feedback that happens when someone gets too close, like rubbing against a microphone. The questions, “Did you hear that?” “Are you a robot?” “What’s that noise?” Because then I would have to explain that I am deaf. So instead I pick up about 30% of what they’re saying to me, nodding and smiling when I don’t hear them and I can’t read their lips. Do you think they get it anyways, that I can’t hear?

“What’s that?” is my placeholder for, “Can you repeat that, please? I am hard of hearing and I don’t have my hearing aids in because I am ashamed of my hearing loss.” Three years, one rehab, twelve steps, good and bad therapy, and now a career as a therapist later, I still feel like it’s my fault. I am embarrassed to ask for subtitles on TV with new people, people who don’t know why I need them. If I’m with someone who knows, I might wear those headphones in movie theaters.

I want to believe my shame is undue. And I AM grateful for this second chance. I currently work at a women’s drug and alcohol rehab as a therapist, working towards my MFT licensure. When I tell my story I have included a few times that the overdose also caused hearing loss, and my clients don’t gasp or treat me differently. If anything, they speak more clearly. They look at me when they speak so I can read their lips.

People often ask me what it was like on the other side. I wish I had an answer. There is shame around that, too. I literally died – no heartbeat, no breathing for untold minutes – and I don’t have anything to report. My memories of the weeks leading up to the overdose are blurred, shifting, a mirage. They change over time, and are ultimately unreachable.

I remember this narrow basement pharmacy where we bought Q-tips and insulin syringes and how I pleaded with my boyfriend that morning to “let me try it straight.” He didn’t want to, but after doing coke all night I can be quite convincing. I remember shooting heroin that morning, watching as the blood punched up into the syringe, knowing we had a hit. It felt psychedelic, warm, safe.

Later that day, just hours before I died, I called my father from the sculpture garden at 110th and Amsterdam. The February sun was holding me close, whispering, imploring, “You like this, you like life.”

That was the last thing I heard.

Challis Popkey is an Associate Marriage and Family Therapist based in Santa Barbara, California. She grew up in Idaho and her love for wild places and adventure have been her steadfast companions. She is an ultrarunner, running coach and wood-fired pizza aficionado. Challis can be found on Instagram at @challypop and online at www.challispopkey.com.

Freeways. Why Is Connecting So Hard? Guest Post by Brendan Bonner. 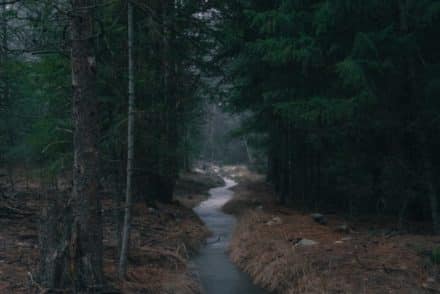 Song Looking for a Tune