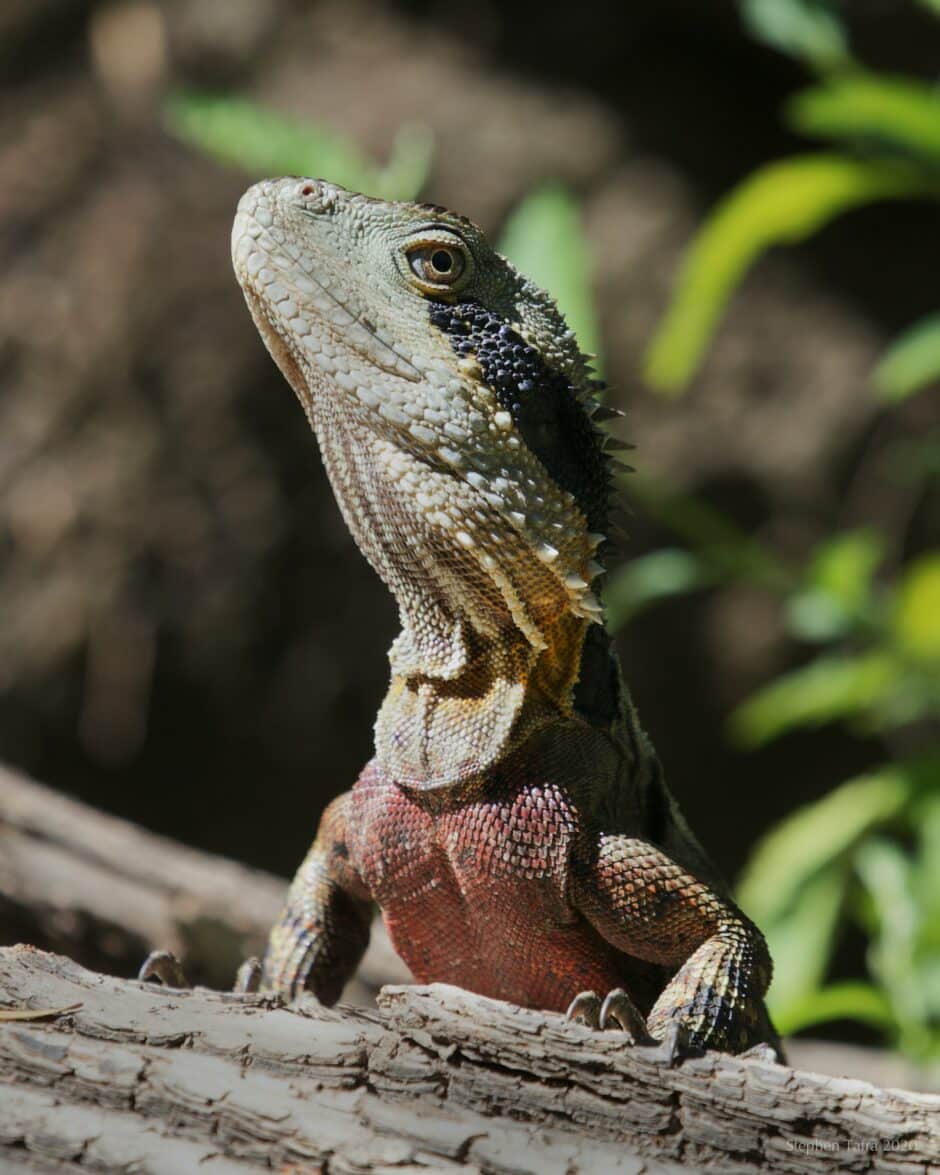 Feeling a dull throb where his forehead had hit the wall, Jeffrey wished he had cut out wider eyeholes. Then again, a lizard’s eyes are not that large, so bigger holes would ruin the authenticity of the costume. No, not costume; “costume” was what his mom called it. His suit. He had started making it with his dad. Jeffrey couldn’t wait to show off the finished version when Dad got home from his business trip.

He thought of it as his green self. His new self.

Two felt feet with long, clawed toes approached the stairs. Jeffrey could tell that his plan to scurry down headfirst was going to be noisy and probably not that safe. He decided, after swaying and testing his weight over the first step, that some lizards must crawl backwards. It would certainly confuse their predators. Holding on to his tail to avoid squishing or breaking it—and having to grow a new one, which would be tedious—Jeffrey slowly turned around and started to slide down the stairs, lizard belly to carpet.

The steady murmur of his mom’s dinner party. An underlying hum of voices. A shrill laugh. The deeper boom of a voice. Agreement. Fork against plate. Glasses clinking. Grown-up things.

More padding, thought Jeffrey, as he slid onto the landing. The next iteration of his being would come with way more padding. He couldn’t wait to show Dad the lizard suit once he got back from his business trip.

Jeffrey’s class was studying reptiles: where they lived, what they ate, what types of them existed, and how they acted. Jeffrey had concluded that you could figure out how anyone lived once you knew those details. So, this seemed like the next logical step.

His two front feet gripped the new carpet on each stair as he drew closer to the sounds downstairs. And suction cups, he thought. Suction cups could make or break his life as a lizard.

He peeked around the corner of the wall dividing the foyer from the dining room. A quick scan: four grown-ups, two empty chairs. Crumpled napkins, empty plates, lots of empty wine bottles. There was a large man with a long white beard who looked a lot like the picture of Charles Darwin in Jeffrey’s science textbook. He was telling a very loud story to the other guests and using his wine glass, nearly empty, for emphasis. Did one of the seated women see Jeffrey?

Jeffrey darted backwards, thinking of the lizards he had seen out by the town pond with his dad. When they felt threatened, they ran and hid, bodies twisting wildly from side to side.

Scurry, scurry, with a light, accidental brush of his tail against an ornate vase in the corner. Then into the adjoining living room, dark. But Jeffrey knew the layout in here, and his senses turned on with a sort of click. The eye holes were too small, yes, but he could sense he was not alone. He imagined a hawk hunting for his little green self. Circling silently, gauging his prey, waiting for just the right nanosecond for a swift attack. If Jeffrey was lucky, he would be able to scuttle under the glass top coffee table for protection. If he were less than lucky, the hawk would snatch his tail, which would take two to three weeks to regrow. And if he were truly unlucky…

He heard his mother’s voice, right near him but as though it were far away.

“Did you hear something?” she whispered.

A man’s voice, and not Jeffrey’s father’s: “Stop worrying so much.”

Jeffrey froze, feeling his heart in his head. He could see from the corner of his eyehole his mother’s leg, her discarded stiletto heel on its side by the couch. A man’s hand gripped her calf and then ran smoothly up her leg, to where he could no longer see it without turning his head. He didn’t want to. His heart choked him, filling his throat. Thump. Thump. Thump.

Rather than acknowledging the cacophony of his heartbeat, they simply resumed whatever they were doing, with noises that Jeffrey did not wish to acknowledge. Sounds that must have been part of a huge misunderstanding.

Maybe, thought Jeffrey, his dad was not really in San Francisco on business. Maybe this was him, just different. Maybe this was what people were like when they came back from California. Or maybe his dad had died, and his mother didn’t want to tell him just yet. But even if he was dead, it made little sense for her to be kissing another man, a stranger, on the newly upholstered couch in the living room. Jeffrey wasn’t even allowed to eat on there.

This had to be a mistake.

His mother’s foot arched out towards him, nearly grazing the tip of his lizard nose. He burst out from under the glass top table and kept going, through the half-lit kitchen and back into the dining room. He faintly heard a crash and an exclamation from the living room, but the guests in the dining room heard nothing. They were all laughing, all drinking. The man with the puffy beard was red-faced and hideous. All Jeffrey could see through tears and his eye holes was gaping mouths with red lipstick, razor sharp nails. He heard shrieks and a yelp as he half-ran and half-crawled through the dining room, into the mudroom, and through the doggie door out into the night’s world.

Gasping, heaving, he ran into the neighbor’s yard. It had elaborate manicured gardens and an ornamental pond. Jeffrey was never, ever to go over there without an invitation.

He tripped over his tail, fell to the ground, and crawled, soaking his costume with the beginnings of the evening’s dew. Swallowing a wave of nausea, he imagined the hawk, swooping over him with night vision and an empty stomach. He quickly scuttled under the neighbor’s giant prize rhododendron bush.

Shoving himself through sharp branches, Jeffrey burrowed into the mulch. He pulled his tail around himself and clutched at it, fingernails clawing the fabric as he curled into a ball. Inhaling the scent of leaves and wet earth, he steadied his breathing. He pictured the lizard videos he had watched over and over. Lizards hiding from prey made themselves completely still, but the ones who were truly asleep had a tell-tale tic in their throats. In, out. In, out.

Jeffrey closed his mouth and breathed through his nose. He concentrated on not moving a muscle, on becoming a stone that a hawk wouldn’t look twice at. In just a few minutes, his breathing slowed. A light rain began to patter on the bushes as Jeffrey’s fingers loosened on his tail. His chest slowly rose and fell under the cover of glossy green leaves and delicate pink flowers.

Samantha Ley holds degrees from Kenyon College and the University of Virginia. Her fiction has been published in a number of online journals and has been nominated for Best of the Net. Most recently, her work has appeared in Fairfield Scribes and Albany Poets. She is a freelance writer and editor who lives outside of Albany, NY. 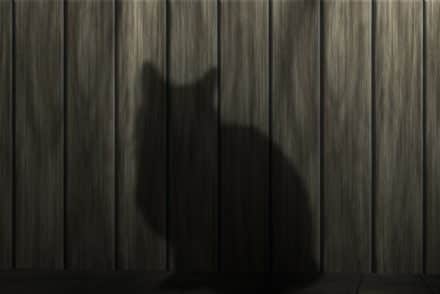 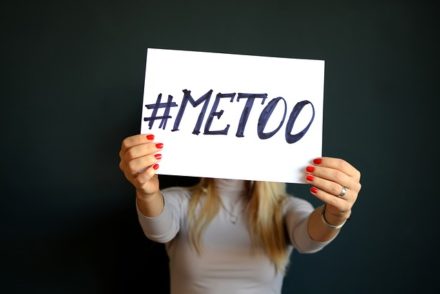 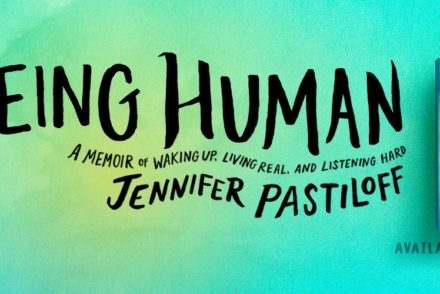