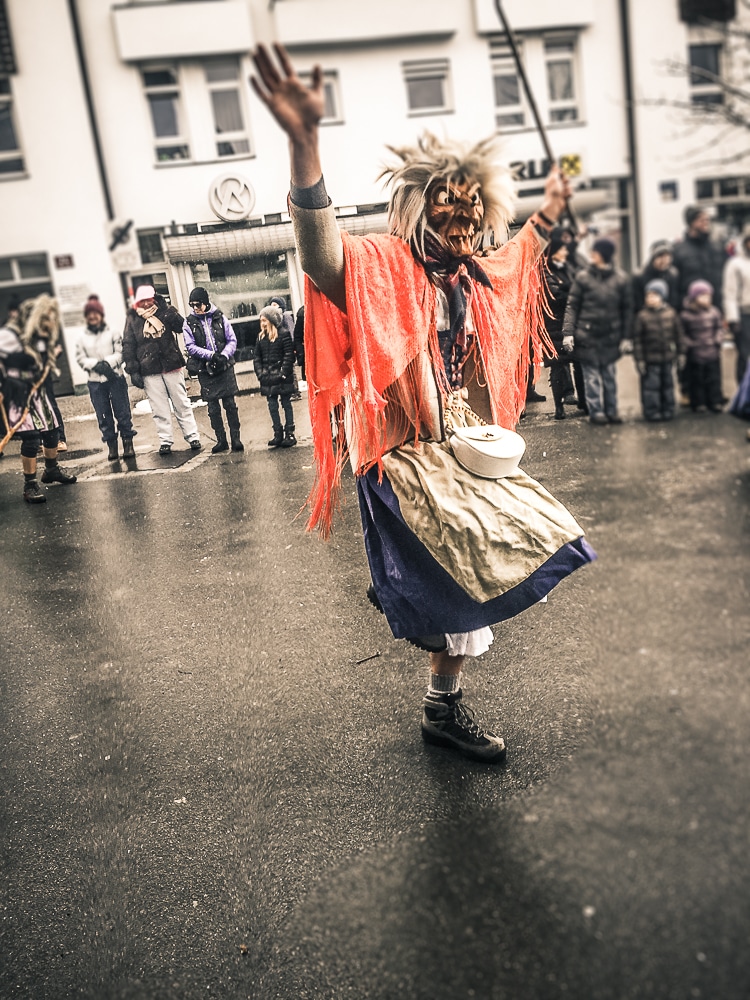 Most people—Americans, anyway—have imaginary checklists with grand items they tick off one-by-one as they go through life. Visit Paris — check! Go bungee jumping — check! Run a marathon —check! When asked about my own bucket list I have to struggle to think of more than two items, and they’re not your usual wishes: kayaking with killer whales in Vancouver Bay and attending the World Economic Forum annual meeting in Davos, Switzerland.

Truthfully, I only remember the kayaking part when trying to come up with a creative answer to the bucket list question. But Davos is a real dream for me. Unfortunately no one on the inside has any reason to send me an invitation, but I’m usually in a different part of the Eastern Alps when the world’s luminaries are convening in Switzerland. Usually, I’m tagging along with my husband for an annual medical congress he attends in the tiny village of Alpbach, in Austria.

Alpbach is quaint and cute and everyone remembers you when you return because outside of the tourists, almost everyone there is related. It takes about five minutes to walk from one end of the village to the other, but it’s an enjoyable five minutes amongst preserved, unified, traditional wooden buildings. Each roof peeks cozily from beneath a quilt of pristine snow, and each chimney lazily exhales a steady stream of smoke from a fireplace inside. Every year the staff at Der Alpbacherhof Hotel patiently suffers through my broken German. They give me wry, knowing smiles when I stumble through the haze of my jet lag into the breakfast hall just as they’re about to shut it down at 10:30am.  Every year the same dog wiggles his way toward Aaron and me for a pat as we walk up the hill toward the glass and metal marvel that is the Congress Centre, a meeting space that is the area’s lifeblood. Because of the timing of the annual meeting and the seemingly misplaced, ultra-contemporary structure, I dubbed the trip “Mini Davos” the first time we went.

This year my husband made an unusual move and signed up for a second conference following the Alpbach congress. I’d been told we were going to Innsbruck. Instead we went to Igls, another small village that is located five kilometers and several decades away from the Tyrolean capitol.

There were signs upon our arrival indicating that we wouldn’t be experiencing the warm hospitality we’ve become accustomed to in the state of Tyrol. My husband checked into the hotel while I organized our things in the car, trying to fully wake myself from the nap I’d taken on the drive. When we walked back through the front door once he’d come to help me, we busily walked toward the elevator, but the woman working behind the front desk came running from it to interrupt our path.

“Excuse me! Excuse me!” she said, putting out her arm to stop me from walking through the elevator door. “This is for guests only!”

Still foggy from my nap, I wasn’t alert enough to be anything but confused for a moment. There was a tinge of familiarity to the unfriendly greeting, but I couldn’t quite place it. All I knew was that I didn’t like it, and I silently raised an eyebrow at the woman as Aaron waved his keycard in front of her and informed her that we were heading to our room. By the time we reached the third floor I was fully awake and haughtily ticked off, realizing that the receptionist had—at best—assumed I didn’t match her assumption of what the wife of a white American businessman should look like. At worst, she’d thought I was a hooker. Once we’d unpacked, I took a page from my mother’s book of make-the-bitches-eat-their-hearts-out. I changed out of my ski jacket and thermal top and into some cashmere, put makeup on for the first time that day (we’d stayed up so late drinking wine with friends the night before!), and completely ignored the woman when we passed her on our way out to find some lunch, cheerfully calling “Grüss gott!” to anyone else we passed in the lobby.

Grüss gott. The phrase means “may God greet you.” In Austria and parts of German Bavaria it’s customary to give this blessing to people as you cross their paths. At busy times of the day in Tyrolean villages the air undulates with a continuous line of these greetings as everyone nods and acknowledges everyone else. In more cosmopolitan areas Grüss gott is used in more direct interactions, such as when entering a store or meeting a friend. The phrase represents much of what led Aaron and I to fall in love with Austria. Grüss gott feels like a friendly reminder to slow down. It feels like a wish to know the people around you. It feels similar to a sort of American Southernism that highlights the region’s unhidden quirks and long, drawn-out conversations. Perhaps this is why we felt so welcome the first time we visited Alpbach. We felt something akin to the warm space within the bubble of friends and family we’d built in South Carolina that kept us from moving away, despite the many signs that we should probably live elsewhere. At home, we were like welcome strangers. The same seemed true in Austria.  It seemed that every Grüss gott was sincerely given as a wish for good luck and well-being. On that first trip we visited friends in Salzburg once the conference was over. It was Aaron’s birthday and we dined and sipped local wine while trading stories of outdoor adventures and shopping. We returned to the hotel feeling warm and happy, as if God really had greeted us in Austria, bestowing grace and fellowship upon us.

The cold welcome in Igls didn’t prepare us for what the friendly night receptionist, who grew up on the other side of the valley, described as a “weird, creepy parade” that the town puts on every three years. It’s called Tyrolean Fasching, which, in this case, seemed like a redneck Alpine carnival gone wrong. The men dress up as grotesque peasant women who dance, hoot, holler and drink copiously as they lead a procession of tractors hauling miniature log cabins atop flatbed trailers into town. When the parade is over, the cabins are deposited in the village square and each one contains a different kind of discotheque. But I’m jumping ahead. By the time I realized that much I was already experiencing the feeling of being not being safe in Europe for the first time in my life.

The drunk, grotesque cross-dressing men knew everyone lining the streets except those of us who were in town for the conference. Unlike many of my friends of color, I don’t tend to notice when I’m the only brown-skinned person in the vicinity unless someone is making an issue of it. It wasn’t until one of the drunkest of the monster-like peasants lurched at me for a raunchy hug that I became aware of the fact that I was the only non-white person around. Suddenly, I felt like I was a target.

As the parade carried on, two more peasants lunged for hugs and gropes. Aaron, his British co-worker and I were laughing nervously, unsure of what to make of the situation. I started hiding behind my male counterparts whenever it seemed like I’d caught the eye of another parade participant. The final two men, who would have failed any sobriety test despite the fact that it was noon, were the most determined, and they were the ones who caught me off-guard. I was talking to a couple from the conference when I realized I wasn’t going to get away from the peasant who was suddenly in my face. As I shrank away from his hug I felt two quick raps at the backs of my knees from a surprisingly heavy walking stick carried by his friend. I tried to keep myself from falling to the ground by grabbing my husband’s arm, which was holding a cup of hot gluweïn. As we stumbled, the stick-bearer’s even drunker friend pulled up his petticoat, revealing that he wasn’t wearing anything beneath it and that he’d taken special care to French-braid the hairs of his nether regions. I shrieked and covered my eyes as I hit the ground and gluweïn splashed onto my jeans. I think Aaron may have spit or hurled out the bit of spiced wine that was in his mouth. As the men laughed heartily and moved on, I wanted to burn my eyeballs with whatever mixture of lighter fluid and flint I could find.

The experience was gross and slightly funny, and very unnerving. Even though Aaron and I exchanged tense laughter as we recounted what had happened, neither of us felt right about me leaving the hotel alone for the rest of our stay. I’ve traveled to Europe many times, but this was the only time I’d felt unsafe.

Apparently this was just another part of a running theme in my life—a revelation of the cushioning that often surrounds many of my life experiences, intentional or not. The little Tyrolean village we return to each year isn’t necessarily an Alpine utopia of acceptance. We repeat the same steps each time we arrive in Alpbach because we have such a wonderful experience there. By repeating those steps we’re less likely to encounter the unpleasantness we did in Igls.

The truth of the matter is that Austria has been steadily gaining a reputation for racism and xenophobia over the past two decades. In August 2014 the European Training and Research Centre for Human Rights and Democracy published a report stating that 52% of blacks living in Austria have been abused or harassed on public transportation because of the color of their skin. The study also states that 47% of the black population had experienced harassment in the street. Up until this latest trip to Austria I’d remained blissfully ignorant of such growing national attitudes because while my husband was conferencing, I was busy insulating myself into a mode of retreat. I’d sleep in, mosey downstairs to breakfast, go for a walk, then spend the day writing in a cozy corner of the Albacherhof’s lounge. When Aaron and his colleagues were done for the day they’d join me at my perch and we’d order a round of drinks. The Alpbach days were sustained by a mixture of solitude and curated sociability. END_OF_DOCUMENT_TOKEN_TO_BE_REPLACED