Guest Posts, How To, Inspiration, manifesting 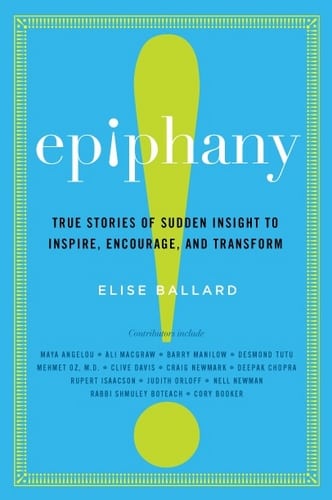 The following post is by my soul sister Elise Ballard. I met Elise in NYC where we attended Oprah’s LifeClass together. Elise and I both write for Positively Positive and she happens to be the author of one of my favorite books, Epiphany! We met in NYC and have been connected ever since. It was meant to be, there is no doubt about that. This morning, during a phone chat, Elise shared with me that she had created vision boards and put exactly what she had wanted on them. And you know what? She got those very things. Look at the photo of the book above, folks. That book is a result of a seed in her imagination first, and then yes, a load of hard work.

The theme in class this week is imagination and the mantra is ” I am already there” so our phone call felt so timely. As does our friendship. (Also, stay tuned because Elise and I are hosting a Twitter contest where you can win a spot at my October Manifestation retreat and a copy of her signed book!)

She shared with me the following post she wrote 2 years ago and I knew I had to share.  You all know my love of the vision board. We even do them at my retreats and workshops. I hope you are as inspired by her post and her success as I am. And yes, she will be featured soon in The Manifestation Q&A Series.

For All Those Vision Board Doubting Thomas’s by Elise Ballard.

I never put much credence in Vision Boards (this is a link to a great article about them) but I kept hearing how amazing things were happening for friends of mine and reading about them so I thought, “What the hey – I need all the help I can get at this point.” It was September 2009 and I had been working for almost an entire year developing this project, writing the book proposal and creating and launching my site. We were about to submit to publishers and I had no idea what would become of me. (I suppose I still don’t but at least I have the book release to look forward to and it will definitely live in the world now – back then, it was completely unknown what would happen.) So I did a Vision Board and put images of things on a piece of poster board that I desired or wanted to happen, just as my friends and Martha Beck instructed me to do . WITHIN DAYS, things started materializing…it was wild! And within a month, I had a book deal for Epiphany with a major publisher (Random House) who wanted the book to be exactly the way I’d always envisioned it and for the exact advance I knew I had to get to make it happen.

Check this out: (Note: These are not great photos ahead, but I think they’re decent enough that you’ll be able to see what I’m saying. And I don’t know why my mock up Epiphany Book Cover is torn, but again, you’ll get the gist.)

This is what I typed/mocked up put up on my Vision Board last Sept.

And this is what the cover of the galley of my book looks like that is going out to press and to my contributors:

IT’S THE SAME FONT AND PRETTY MUCH THE EXACT SAME BLUE AND ORIGINAL TITLE.

THE LESSON LEARNED: Don’t be so impatient and such a worry-wart, silly grasshopper, things eventually come around. (And VISION BOARDS work!)

I’ve probably done about 3-4 Vision Boards throughout the past year and things always happen from them. I always recommend at least trying VISION BOARDS – even if it’s just to see what happens…Why not? Encourage the magical aspects of life – it makes it all that much more exciting and fun.

Here is another great post Elise shared about vision boards a few days ago.

Elise Ballard is the author of Epiphany! a book of inspirational stories, aha moments and exclusive interviews from Random House Publishing.