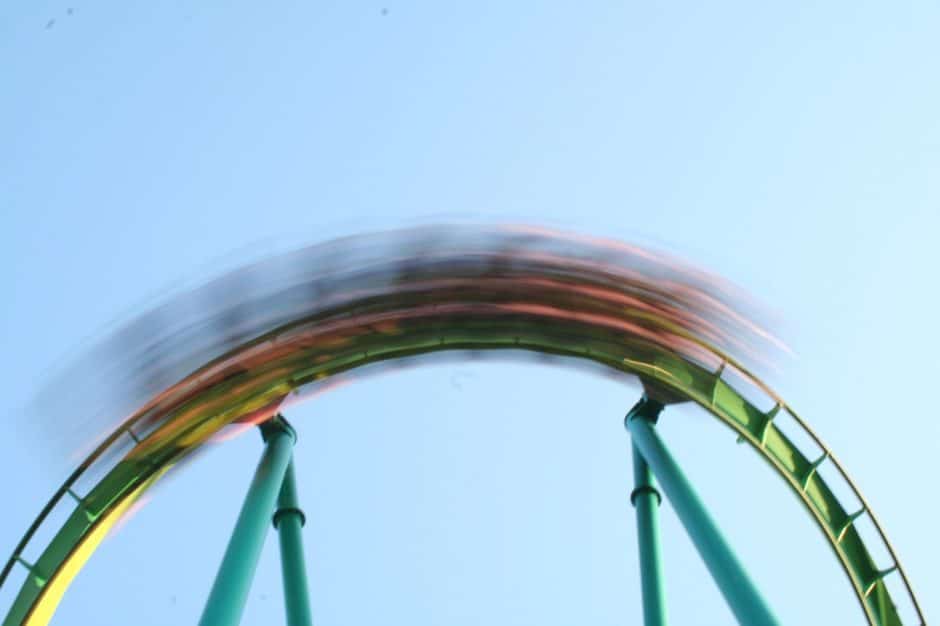 He went on that ride with his Dad. At first I was sure he wouldn’t go. I stood behind the fence and watched them get seated and strapped in, watched the guard lower the safety restraint on them for extra security.

Oh how I hate roller coasters. I hate them precisely because you’re supposed to love them. Because every time I admit to myself that I hate them I get this nagging feeling of inadequacy in my stomach, as if some cheerful somebody is about to come over to me any moment, cheerfully grab my hand and pull me with her saying in the most caring cheerful determined and supportive voice you can imagine ‘Come on! You are gonna have fun!’ And will maybe add ‘Don’t be scared!’ And to the sound of lazy applaud of those still waiting their turn to ride, I would drag after her feeling clumsy and non-fun and somewhat guilty for being a burden – because surely she can be simply having fun but instead she had decided to take care of me – but totally unable to say, even to myself in my head ‘LEAVE ME ALONE I DON’T FUCKING WANNA HAVE FUN!’ What’s the problem to just let a person be! Maybe they are having fun standing there and watching other people hanging upside down in the air and dangling their limbs like little helpless insects!

But I digress. All I wanted to say was that I was sure Martin wouldn’t want to go on that roller coaster ride. Because he is just such a cautious boy and he really doesn’t like speed or any other kind of adrenaline inducing activities. I mean he even hated slides until he was almost four years old. And I’m NOT the one to cheerfully grab his hand and pull him towards whatever he is scared of. Because SEE ABOVE. In fact, that was the silent promise I made to myself the minute the mere possibility of motherhood appeared in front of me in the form of a little plus sign on a pee stick: NO CHEERFUL HAND GRABBING. He is allowed to be whatever he is and I will never be the one to coerce him, in however subtle and positive way, to be what he is not.

And yet, as I was standing there watching him take the seat beside his Dad, and with this focused but calm expression on his face raise into the air for his first ever roller coaster ride, I couldn’t keep wondering: was I unintentionally enabling his fears all this time? Was I, in my desire to give his fears space and validate them, inadvertently helping them to be stronger than they needed to be? I didn’t think I was. Yes, I offered him to hide behind me if there was a dog coming toward us and I felt him getting tense, because I didn’t want him to jump onto the road in fear. Yes I never insisted on him getting even his toe in the swimming pool when he was scared of the water. But I also made sure he spend enough time around dogs and swimming pools, and always said things like ‘When you are ready, you’ll be able to do it’. I had never been an overprotective parent. But maybe I wasn’t doing enough to help him be ready? Did he just need a little nudge in the right direction?

That was always a source of disagreement and even conflict between me and my husband.  While I always fiercely defended Martin’s right not to do things he was scared of, he was always for giving him a little nudge towards overcoming his fears. I almost always won.

But I remember clearly the few times when I didn’t. Once a couple of years ago we went to see a dinosaur exhibition in the Montreal Science Museum. Martin got terrified when he saw from the entrance a huge hologram of T Rex and refused to go in. Nothing we said could ease his anxiety, and he was on the verge of having a tantrum. I was ready to drop the issue but my husband picked him up saying “Just close your eyes if you are scared, you are with Daddy” and carried him quickly through that first room and into the next, leaving the hologram behind.

At the time I was sure that that was not the right way to handle the situation. But now I think that maybe it was. Maybe sometimes depending on the situation and in a safe enough environment (like in Daddy’s arms) it’s ok to adopt the attitude “I know you are scared but we are gonna do it anyway.”

I was also remembering this episode as I was recently reading Elizabeth Gilbert’s “Big Magic”, specifically the part where she talks about how her mother helped her overcome her many childhood fears:

“At every turn, she made me do exactly what I dreaded most. Scared of the ocean? Get in that ocean! Afraid of the snow? Time to go shovel snow! Can’t answer the telephone? You are now officially in charge of answering the telephone in this house!”

As someone whose childhood fears were routinely dismissed, if I had read about this strategy in a different context, it would have appeared to me brutally insensitive. But in Gilbert’s description it sounds like a positive experience, and she believes that this attitude helped her get more adventurous and gain confidence. Who doesn’t want these qualities for their kid? I know I do. Maybe the secret is to validate their fears and while providing support, guide the child into the feared situation?

Or take, for instance, the incident at a ski resort a few years back. Martin was about four, and me and my husband took turns babysitting and skiing. Once I came back from my skiing shift to replace my husband on babysitting and was shocked to find out that while I was away they took a couple of rides snow tubing. I’m not a fan of snow tubing, but since Martin seemed to have enjoyed it, I offered him to go again with me this time, as soon as my adrenaline junkie of a husband took off skiing on the double diamond slopes. However, by the time we got to the top of the mountain, Martin must have picked up on my hesitation because when it was our turn, he suddenly started crying and wanted to back off, and it took quite some effort to convince him to get into the tire. When we got to the bottom, he got out and exclaimed “It was fun with Daddy but it was scary with you!”

As I was watching Martin on the roller coaster, I thought more about these things. My husband is definitely not a cheerful-hand-grabber. That is, he is not the emotionally manipulating type (nor can Martin be as easily manipulated as I was as a child. If he is sitting there, I’m pretty sure that the part of him that wanted to go was bigger than the part of him that was scared). My husband is also not really the macho “you have to man up” type of Dad. He is just fearless when it comes to adrenaline inducing activities himself, and he tries and ocassionally manages to pass on his enthusiasm and fearlessness to Martin.

So what’s the right way to do it? Is there one right way? The more I think about it, the more I am convinced that our disagreement about it is the best way to do it. I will keep giving space to Martin’s fears, maybe sometimes skewing in the direction of enabling them. His Dad will keep pushing him to overcome them perhaps risking dismissing them. We will both sometimes screw up, sometimes get it right,  and hopefully from the middle of this parenting conundrum, both because and in spite of it, our son will emerge as a balanced, non-fearful, self compassionate, sensitive and self-aware individual. 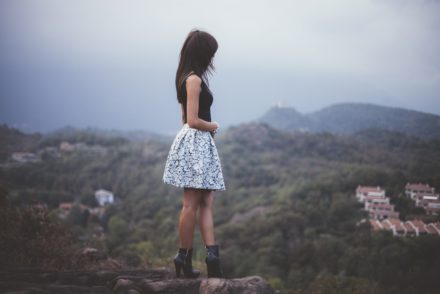 Talk Her off the Ledge 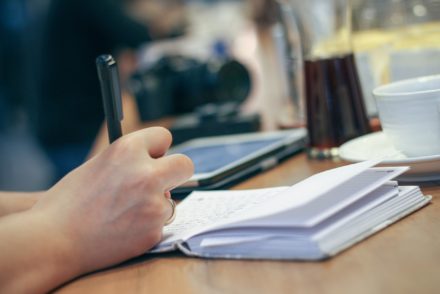 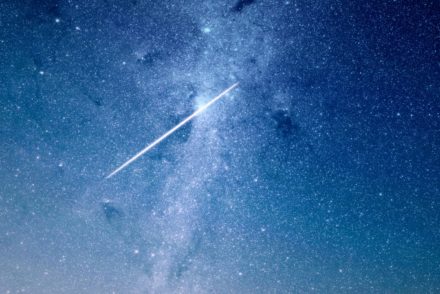