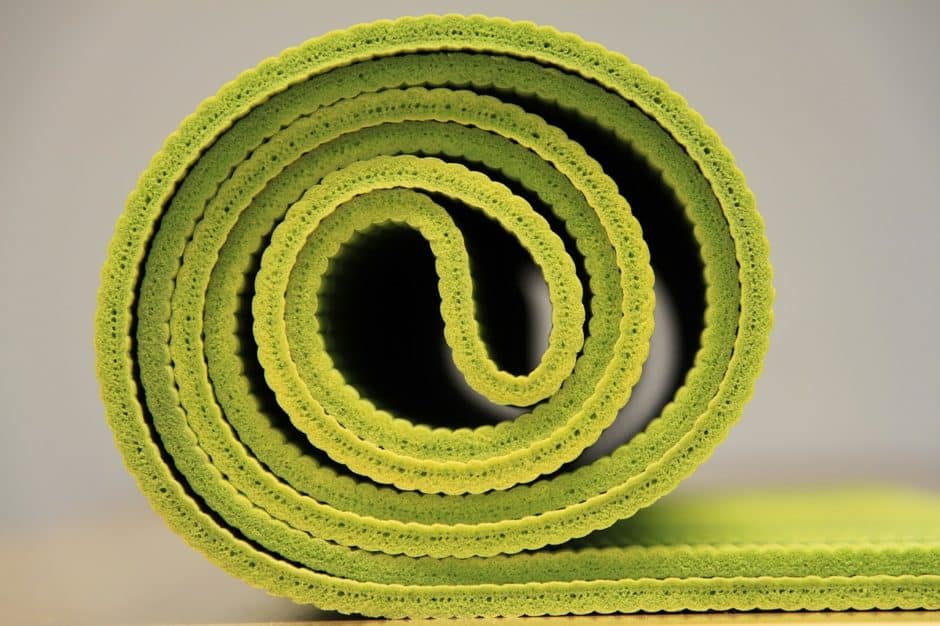 My car flies at breakneck speed to make a yoga class. The sun spanks my eyes.

Its anonymity I seek. To be a body in a flock of bodies where none have crossed my path before. To be a cut-out swatch, side by side, without being pinned to any other. To complete a pattern. To be random. To fall. To float. To fly. To flutter. To feel.

No, I have not come to the yoga mat to fight but I just realized I placed my mat next to someone I used to know. Someone I had a fight with. A public fight. I was left beaten, covered in my own invisible feathers. Maybe time has a way of making us more than we were.

It’s too late to move.

It’s subtle how we recognize the past. I knew it was her because of a curve of her skin and an angle of her cheek. The space she took up and the space she didn’t. The negative space of her. Nothing definite. Each of us carry our imprint of the other.

It’s been a few years. Does she know it’s me? Does she see my new tattoo spread across half my back? A blue goddess, covered in teeth and snakes. She holds a dagger.

I look down at my legs, one thigh folded over the other, my feet bare, aware that I haven’t showered in two days. My period is on its way. I smell it like moss, sticks, and bits of feather.

Her eyes are closed. Pretend rapture, I’m sure.

I want my blue goddess to aim her dagger between those eyes.

S. is attractive. Dark hair and eyes, tall and thin. Has six-pack abs. When she used to teach yoga at the studio I own, students would comment on how they wanted a stomach like hers. My hands go down and squeeze the flesh of mine which has been through too many rounds of weight gains and losses. My hands amass silvery webbed flesh with a slit for a belly button. Some would say a trophy.

Shit, I thought I was better than THIS. I had let all THIS go. Maybe old demons need to air their foul breath out of pursed lips to remind us what we have not completely digested. Maybe they need to tongue rattle.

I close my eyes. I draw my breath up to my collarbones where it lingers. I purposely hold it there. I watch the pause and wait for it to right me. It kind of does. On the exhale, the breath floods my belly. A wind sound fills the back of my skull. My jaw bones soften. I am finding my way back to what needs my attention. Back to now. Now is breath and sensation.

A yoga teacher once told me: Feed your demons. A strategy for not having them eat you.

Do you need to know the story between S. and me? Does it matter? Did it ever? Maybe I need to tell it.  Maybe the need is why it matters.

The climax of the fight takes place at my studio, three years ago, in the hallway, among carefully placed pairs of shoes. Mostly flip-flops and sandals. The bodies that go in the shoes are inside the yoga room, on their backs, their knees roll to one side and then the other, in a guided knee-down twist.

S. is my studio’s most popular teacher. She has stepped out of the room she is teaching in, and has grabbed my arm. For a brief moment, I think she is in pain. But no, it’s something else, hot and insistent. Her mouth moves open and shut, open and shut. Words come out and spill on the cork floor. Something about quitting, opening her own yoga studio less than a mile away, and taking with her as many students as possible.

I ask her why. She tells me, “You need to look inside. Do some searching. Ask yourself why no one respects you.”

Her bobbed black hair swings this way and that and her lips get redder as she speaks. Now the students are on their backs with knees bent, feet on floor. They push into their feet and lift hips and torsos up to the ceiling. Their necks are extensions of their spines. Little spines in neat rows. Up and down they go. An assembly line of ribs expand and contract like the small bodies of birds breathing.

YOU NEED TO LOOK INSIDE….

How fucking dare she?

Seeing red is a real thing.

Red is the color of heat,

I have never been able to speak up to her or anyone at my studio.

She tells whomever will listen I am jealous of the amount of students she draws in.

She says she is the reason my studio is a success.

She tells others not to take yoga from me, that I’m not a real yogi.

I secretly wonder if she’s right.

Red is the color of shame.

I’ve done yoga with weapons. At a workshop. We were meditating on death, while we flowed through standing poses. A live drum pulsed in the room. The space between hitting the drum and the sound it makes is called Spanda. In Sanskrit, Spanda means pulse of the universe. The beat of your heart is called Anahata. It means unstruck sound.

The teacher put various weapons in our hands. In Warrior One, he gave me a staff. I felt nothing. In Goddess Pose, he changed out the staff for a sword, still nothing. Then a loaded pistol, black and heavy. He curled his slim fingers around my hand. Our wrists touched one another. Still no response. Then the dagger. In my hands in Warrior Two. Front knee bent and my bare feet pushing into the ground. There. There it was. The right weight. Its size surprisingly small. My throat opens and the drum beat burrows deep into my hip sockets. My body electrifies. A familiarity. A knowing.

I’ve killed with a dagger. More than once.

We don’t make eye contact, S. and me, as the teacher calls out poses in the heated room, and sweat pours from my hair-line. S. was never one to break a sweat but not because she doesn’t work hard. For a few poses, I forget about S.  It’s only me and the rise and fall of my breath in the forest of others, my body folded in half. A silvery belly I am. A long spine I am, making it expand and contract to lightly cage me, to hold me lover-like.

At the end of class, before final resting period, the teacher brings us onto our backs and talks us up into wheel pose. A pose where you bend your knees, feet on the floor, bring your hands behind your shoulders and press up making a big upside down U shape with your spine. It moves stuck energy.

Out of the corner of my eye, I watch S. She pushes up into wheel with me. For a few breaths we are holding together in sync. We are both strong. But then she pushes herself up off her hands to standing. A move requiring huge amounts of leg and back strength.

I know, right there, she is competing with me. Wanting to show me what she can do, just like I wanted her to see my tattoo. For a moment, I feel nothing but awe.

She does five of these. They are called wheel drop backs. A pose I cannot do, but oddly I do not feel less than. I witness each one while I hold my own, more moderate wheel, the one the teacher is guiding. My legs shake in their own right. My boneless tongue curls and presses up against my soft palate.

After wheel, we go into final relaxation.

Ten minutes later, the teacher tells us to slowly awaken our bodies. My ritual is to hold every part of me still except to slowly move my tongue side to side. My red tongue, the color of the earthworm, a creature who can regrow segments of themselves when they need to. In this liminal space after yoga, the parts of me which have been cut off, banished, damaged, or lost, have regenerated. Only now, they are different, not exactly the same. They’ve reinvented.

I sit up and wait for S.

I’m not sure what will happen.

S. remains on her back, covered in a blanket, a small silky pillow stretched across her eyes. I sit there, with my legs tucked under me, until everyone else is almost gone. It becomes obvious she’s not going to get up. She will stay like this forever, covered and motionless, if she has to.

I don’t want her to have to.

I roll up my mat and walk away.

A dagger inked on my back.

My body feels light and full at the same time.

I could take flight off the ground. 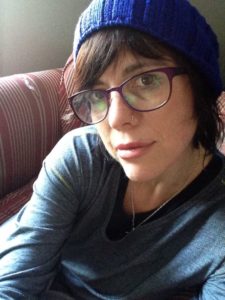 Anne Falkowski is a yoga teacher/workshop leader and a wannabe writer. She has published numerous articles on yoga and body image.  She can be reached at director@samadhiyogastudio.com 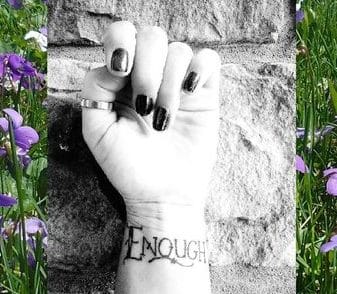 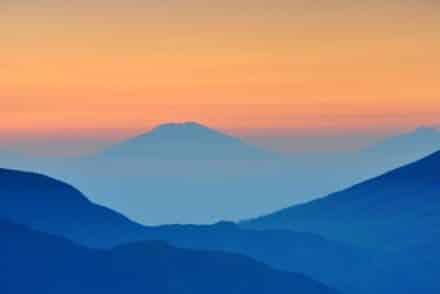 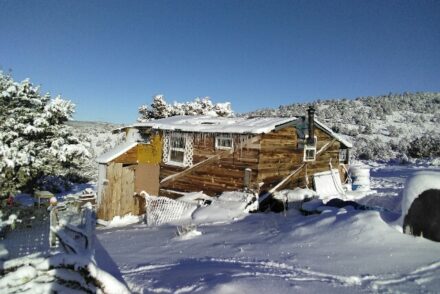 Cake, and Other Necessary Comforts

The Sweet, The Bitter, and The Wise

How to Survive the First Year